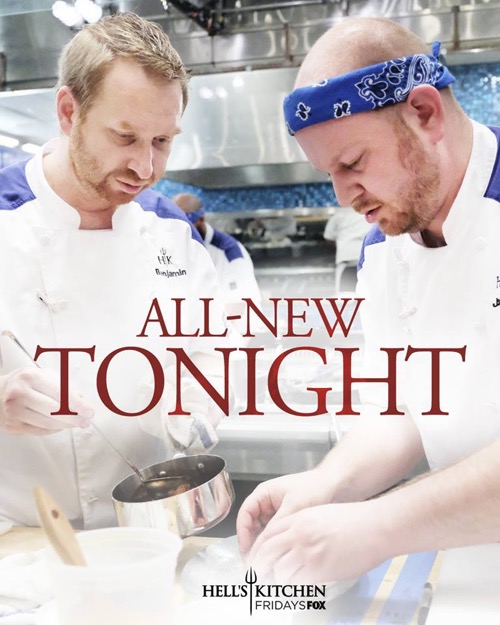 Tonight on FOX their Gordon Ramsay culinary competition series Hell’s Kitchen airs with an all-new Friday, October 20, 2017, season 17 episode 3 and we have your Hell’s Kitchen recap below. On tonight’s Hell’s Kitchen season 17 episode 4 episode called, “Just Letter Cook,”  as per the FOX premiere, “The remaining chefs must face off in a “game of chance” to divvy up their ingredients and create their own unique dishes. During this challenge, each chef has 45 minutes to create a dish, using a protein of their choice with all the ingredients selected from the game of chance. ”

Hell’s Kitchen begins with Van coming to see Barbie and Elise; he says Barbie is “sexy”, joking he can charm the fangs off a rattlesnake. They are flirting when Barbie says she will have to give him some drinks tonight as he says he is always hot and she admits she is always cold; most of the other women roll their eyes at the flirtations.

The following morning, Chef Gordon Ramsay says the food has to look great, taste great and needs to come with a little bit of showmanship when it comes to the new restaurant in Las Vegas. A few showgirls come in as he explains they will be playing their own game of chance.

Ramsay will be using the machine to test their knowledge of ingredients. He will press the button and a letter will appear and they will have to name an ingredient that starts with that letter, the first chef who gets stumped will lose the round for their team; the winning team picks the ingredient they want and which one the opposite team will have to cook with.

“A” is up now, Josh stumps his team so the red team keeps asparagus and gives the blue team artichoke. “P” stumps Dana, the blue team gives them peanut butter and the men keep portabella mushrooms. “R”, the women keep rice and give the men raisins. The final round is a “B”, the blue team is blessed with bacon while the red team gets blueberries.

Chef Ramsay tells them to get creative, he wants to see some flair and gives them 40 minutes; each chef is given is given a protein on top of the 7 shared ingredients. Barbie isn’t feeling okay as she is allergic to peanut butter and needs someone on her team to help her with that part.

Barbie brings her dish first, each dish is scored 1-5. She made pan-seared halibut with an African peanut sauce. She nailed the fish 4/5. Manda is up next, she made rib cap with cantaloupe infused rice. The rice is bland. 2/5. Dana made peanut butter lime rib eye with blueberry glaze, 5/5. Robyn presents a seared black cod made in peanut butter with blueberry gastric. He says the plate looks like someone got shot and he is struggling to give it a 1/5. Elise makes wagyu strip steak and gets 5/5. Michelle makes a filet with pepper crusted cantaloupe. 5/5. Jennifer is the last one with peanut butter fried monkfish. It is a very strong 4/5. Their total is 26.

Milly made a monkfish dish. It doesn’t look intriguing but it’s a 4/5 for the flavor. Van made the filet, the filet is nailed but the sauce is too sweet. 3/5. Benjamin made the wagyu strip steak, it is beautiful 5/5. Jared made the black cod, he is very proud of the dish, but Ramsay says the bizarre thing with this is the cauliflower tastes better than the protein. 1/5.

Nick brings up his ribeye dish 5/5. Josh is confident his dish can help them win. He made the halibut dish, the fish is overcooked and it’s a 3/5. Gio has all the pressure on him. He needs a perfect score to tie the red team. It is cooked beautifully and a good dish saying he cooks meat like an angel. The dish is a 4/5, and the women win the challenge.

The women are heading to Santa Barbara, staying overnight at a 5-star resort and they will be flying there in their own private plane. The men will be hard at work, as there is a delivery of potatoes, and then they will be recycling hundreds of pounds of garbage. The women celebrate with champagne on their way to Santa Barbara to the Belmond resort.

The women are thrilled to be in the John F. Kennedy suite, amazed at the once in a lifetime opportunity. They are enjoying the high life while the men get down and dirty in the disgusting trash. Robyn says the women are rocking their bikinis and she is in heaven watching them.

Chef Jocky brings them lunch, it stinks and they know it is going to suck but attempt to eat it. The blue team is working in the kitchen where Josh says he is a chef to celebrities and has his own catering company. The women return and are welcomed to hell, bragging about their reward, they quickly get ready for dinner service as Marino opens Hell’s Kitchen and both kitchens host VIP tables.

Chef Ramsay welcomes Shannon Tweed, former play mate and Paige Van Zant an MMA fighter. He begins to call out the orders, telling the teams to work together for the 12 top table for a 30th birthday party. This is the first time in history that both teams were able to serve the table at the same time. Josh seems to be getting frazzled when making the risotto. He brings the risotto to the pass and delivers 6 servings when he should have only made 2.

In the red kitchen, Michelle delivers raw rice with too much garlic. Jennifer is pissed off because Michelle is a good cook. Chef Ramsay says the refire was better and tells her to do that from now on. Josh is staring at his stopwatch and when Ramsay sees, he takes it from him and throws it in the pizza oven. Again, Josh screws up and takes 17 minutes for the risotto and serves him 5 dishes.

Josh is told to sit with Paige and eat the risotto, when he returns to the kitchen he pisses Van off. They have trouble communicating and Van is furious that he came to help Josh and he’s acting like a child.

Chef Ramsay is waiting for the red team’s garnish and wants to know why Barbie is struggling on garnish. He angrily calls Barbie a donut, but Michelle finds it funny. Shannon and her guests are enjoying their meal.

Back in the blue kitchen, Gio is called out on his porkchops, one is really burnt, and he is ordered to refire them quickly. He delivers a refire and his guests are happy. Jennifer and Benjamin are called to the pass, told what the entrees are for the 12-top, and they are given 8 minutes to get the table together. Ramsay calls the teams together and the blue team screws up; he sends out the red teams entrees and Jennifer rescues the blue kitchen with the duck.

The blue team once again brings raw Wellingtons to him and he brings them to the back room, screaming for them to close the door. He tells them he is done, and they are not rookies anymore. He kicks them out and finishes the last 2 entrees himself and calls Robyn and Elise to do the blue team’s desserts; both feeling this is redemption time for the red team.

The blue team gets very angry with each other, where Milly stands up and is not letting anything fly. Josh is the pick for everyone as the other one is Gio or Benjamin. Milly says the first nominee is Josh because he kept making the same mistake on the risotto. The second nominee is Giovanni based on him making the most mistakes.

Both men are called forward but when the blue team is asked who all feels they are carrying Josh and the entire team raises their hands. Chef Ramsay tells Josh to give him his jacket, saying when a team gives up on you, there is no place to go and sends him to the blue team. Robyn stands up and gives Josh her seat and she joins the blue team; the red team is furious. He says he hasn’t seen them at their best and they have one more chance to show him what he thinks he sees in them.