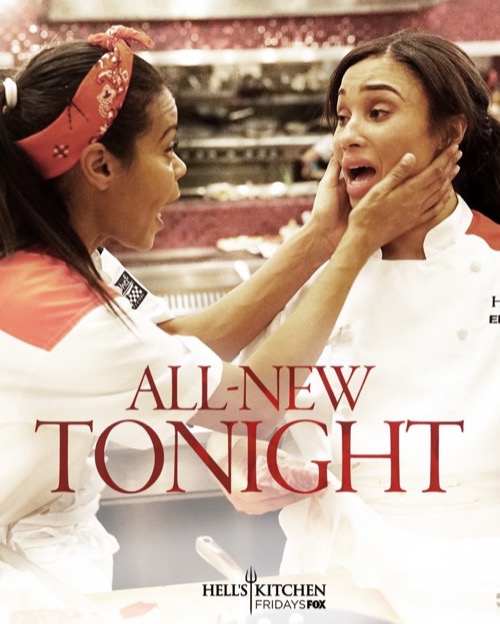 Tonight on FOX their Gordon Ramsay culinary competition series Hell’s Kitchen airs with an all new Friday, October 6, 2017, season 17 episode 2 and we have your Hell’s Kitchen recap below. On tonight’s Hell’s Kitchen season 17 episode 2 episode called, “Raising the Bar,”  as per the FOX premiere, “The 16 chefs are given 40 minutes to execute the Bar Menu Challenge. Then, the chefs prep for the season’s first dinner service, as they adapt to an all-new menu. And for the first time ever, the restaurant will host Chef Tables on opening night with special VIP guests that include singer Jordin Sparks, Joe Montegna, French Stewart, Keith Sweat, and Kirstin Maldonado from Pentatonix.”

Hell’s Kitchen Season 17 “All-Stars” continues tonight after Chef Gordon Ramsay announces this year Hell’s Kitchen will offer a special bar menu; they are to create a bar menu item; whomever has the most immaculate item will be featured throughout this whole season and the winning chef from this challenge is also safe from tonight’s elimination. He wants two plates from each and are given 40 minutes to do it in.

There are two important guest judges – Christina and Jocky, who look after 19 of Gordon Ramsay’s restaurants across three continents. They will sample each dish and then select 4 from each team.

After tasting everyone’s dish, Chef Ramsay returns and Christina picks Dana first who made a beer battered lobster tempura taco. He says good job and the dish to beat. Jocky says Milly’s is the first pick; he made hand-cut French fries, topped with a lobster cheese sauce. Ramsay says it’s the most elegant pot of poutine he has ever tasted, confirming its better than Dana’s.

Christina calls Ashley as her second pick. She made polenta cake with tequila, lime, cilantro marinated shrimp. Chef says visually it’s beautiful and creative and that is in his top 4. Jocky chooses Jared next who made a dumpling stuffed with pork and smoked halibut. Ramsay says it’s delicious but it’s on par in his top 4.

Christina chooses Elise for her third choice, she made a Tuscan bar wings; he loves the taste and the crispiness. He wants to swap them out with Ashley’s shrimp. Jocky chooses Van with his steak tacos. He agrees he would want to start dinner with that and is swapping his tacos out with Jared’s dumplings.

Christina’s final pick is Michelle’s Lobster, shrimp sausage; it is her take on a lobster roll. He says they look beautiful and that is definitely in his top 4. Jocky’s last choice was Nick and his crab fritters with lemon chive mayo. The presentation is exquisite but it’s not in his top 4. Chef Ramsay says the most outstanding bar menu item belongs to Milly. He is thrilled and Josh is happy for him but Michelle feels he falls back on things he has done a thousand times already.

Ben is not feeling well, he retreats to his room to check his sugar level; the teams are called to the kitchen where Sous Chef Christina says they need to have their knives for this service, they are presented with them and told to get started right away. Christina tells them they have dinner service tonight and the menu is bigger than it has ever been. Jocky shows them what the dishes are and how to prepare them.

With 30 minutes to dinner service, Ben goes to see the medic; he wants to give this everything he’s got but is concerned, so the medic takes his vitals as he continues to worry about his diabetes and at this point needs to decide if he is going to take the chance or if he is “out”. On the books he is healthy but this isn’t an idle situation, he says he is going to go until he can’t no more.

Chef Ramsay lines everyone up saying he is confident in their abilities that they will be hosting chef tables on opening night. Red team will be serving Jordin Sparks and Blue team will be serving Joe Mantenga, from Criminal Minds. Ramsay expects an All-Star service, orders them on their stations and tells Marino to open Hell’s Kitchen!
On top of having the biggest and most diverse menu in Hell’s Kitchen history, Chef Ramsay has added a special shrimp and pasta appetizer; Marino shows Dana and Milly how to make them as orders begin coming into the kitchens. The first order up for the red team is supposed to be carbonara but it looks like scrambled eggs; Ashley attempts to redeem herself already.

Josh is serving the cold appetizers, he takes a bit more time in order to make sure its perfection, and he does pass Ramsay but he doesn’t like how slow he is. Joe Mantegna and Jordin Sparks arrive to their kitchen’s chef table as Chef Ramsay begins to call out entrees. Elise is worried since it’s been 5 years since she has been in the kitchen. Robyn is praised for her lobster wellington; Ramsay is happy with everything they have served thusfar.

Jared is nervous sharing the fish station with Ben since he isn’t feeling well and when they bring up their salmon, Ramsay punches it saying it is ice cold. Ben takes the blame because he sent Jared up with the raw salmon. Chef Ramsay sends the lobster wellington, while Ben begins to wobble at his station, very unbalanced.

It’s one hour into opening night, Ben is trying to bounce back but he falters and Jared holds him up. Jared brings up the salmon as Ben says he is okay. Ramsay tells them the salmon is cooked nicely and the Blue team rallies behind Ben.

Elise and Robyn are trying to keep the momentum at their meat station but Ramsay starts swearing and calls the entire red team into the storage room. He wants to know if they can get their crap together as the steak is still white, it is still raw and cannot be resting like that. Nick is concerned as he works the meat station because he was sent home working that very station in Season 14; but Ramsay tells them everything has been cooked perfectly.

Elise walks to the pass with the NY strip steaks, Chef Ramsay calls the red team to the pass calling this a disaster as the strip is now overcooked; he sends the entire team over to the table and apologize for their mistakes. They return to the kitchen but Ramsay calls over blue team’s Giovanni and has him cook the NY strips; Barbie tells Elise to take control of her station and tell Giovanni what to do. Giovanni is cooking the steaks, but Elise keeps flipping the steaks and he orders her to stop before she gets them both in trouble; Elise is not happy being told what to do.

It is 90 minutes into dinner service, and Giovanni is trying not to flip out on Elise. The blue team is very pleased to hear Chef Ramsay say he has never seen proteins cooked with such perfection. With Giovanni’s help, the Red team’s entrees are finally reaching the dining room.

Manda is set to deliver her salmon and pork, Ramsay throws the salmon in the trash telling her it is raw, the next one she is cooking, the skin is burnt and attempts to start over again but he catches her. He is furious and screams for all of them to get out. Chef Ramsay apologizes to Jordin as they walk out in shame and the blue team are on their way to completing the best opening night in Hell’s Kitchen history.

The red team, talk in separate areas about who is going to be nominated and what caused them to end up in this place. There is a definite alliance between Barbie and Elise; Barbie is telling Robyn off that she was only doing 2 proteins while Elise did 4. Manda did great the whole night and made one mistake and feels she shouldn’t go home for that one ticket.

Manda says she worked and improved on everything he criticized her for last time; she communicated all night long and up until the last ticket, that got the best of her. Elise says she isn’t the weakest member of the red team. She has no excuses but given the opportunity she will do better. Ramsay reminds her that he had to get Giovanni from the blue team to come over and coach her on how to cook. She’s embarrassed by that. Jennifer is asked who she would send home and she says Manda. Barbie (Manda), Dana (Elise), Ashley (Manda), Michelle (Manda), and Robyn (Elise) vote as well. Elise says it’s because she is a threat.

Chef Ramsay chooses Ben to go home, saying he hasn’t taken his eyes off him since he got there and feels he cannot go the distance. He takes off his jacket, apologizes to Chef Gordon Ramsay and wishes his team good luck; he feels Chef Ramsay made the right decision.

“Big Ben… More like Big Liability. He clearly wasn’t going to be able to keep up, so I had to let him down!”
~ Chef Gordon Ramsay