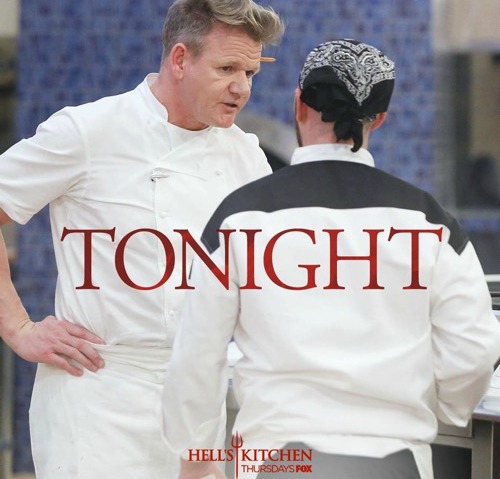 Tonight on FOX their Gordon Ramsay culinary competition series Hell’s Kitchen airs with an all new Thursday, January 19, 2017, season 16 episode 14 and we have your Hell’s Kitchen recap below. On tonight’s Hell’s Kitchen season 16 episode 14 episode called, “Playing Your Cards Right” as per the FOX synopsis, “A luxurious overnight trip to Las Vegas is at stake when the remaining chefs compete in a head-to-head challenge, during which they must race to hit a buzzer in order to get three of the six ingredients needed to create a dish for guest judge Jenn Louis. Later, celebrity diners include TV anchor Neil Everett, comedian Pauly Shore and actor Erik Griffin.”

Hell’s Kitchen begins tonight with Paulie expressing his anger that Andrew was sent hope. He had a profanity-laced message about Kimberly while Heidi trying to calm his anger. Chef Gordon Ramsay invites the remaining 5 chefs to his poker table. Ryan brags of her card shark abilities.

Chef deals the cards to show chicken, potatoes, and smoked bacon which must be used in each contestant’s dish. They must then hit their buzzer to get three more ingredients for their dishes. Ryan and Paulie lag behind the other contestants in get their meals complete.

With 30 minutes on the clock the cooking begins. Tensions are high in the kitchen and both Ryan and Kimberly comment on their desire to win. Guest judge Jenn Louis and Chef will decide if they like the dish and that contestant will take a seat in the leader’s chair. As each dish is sampled the contestant with the better tasting dish will sit in the chair. The contestant in the chair at the end of the challenge will be declared the winner.

Kimberly is up first in the “Play Your Hand Challenge” and presents pan seared chicken with a Dijon crust and red smashed potatoes. Her dish is good and she takes the chair. During the tasting of Paulie’s dish he has several compliments for Chef which causes Heather to suggest he is a brown noser. Paulie’s pecan crusted breast of chicken over a potato puree with white wine and bacon sautéed green beans easily defeats Kimberly’s and he takes a seat in the chair.

Heidi’s bone in chicken with swiss chard sautéed in bacon is not good enough to defeat Paulie and he remains in the leaders chair.

Ryan attempts to de-thorn Paulie with her bread crumb encrusted chicken served on a bed of potatoes, spinach, leeks and bacon. Again Paulie wins and now it is up to Heather to take the lead. She presents her rustic egg and percino cheese encrusted chicken breast paired with potatoes and peas. Her dish is described as simple but flavorful and she wins the first black jacket challenge of the evening.

Heather’s prize is the royal treatment at the Venetian Hotel in Las Vegas. She will stay in the 7000 square foot Presidential suite with its own butler. Her fellow contestants cannot hide their envy.

Chef then declares it is “Recycling Day” in the kitchen and that the dumpsters are over flowing. The contestants must now empty and separate the trash from the recycling. Paulie has many complaints about this task. Chef goes on to say that since this Las Vegas trip is so amazing Heather can chose another contestant to join her. She easily picks Heidi much to Kimberly’s chagrin.

As the remaining contestants suit up to tackle the dumpsters there is much complaining and profanity. Kimberly and Ryan having nothing good to say about Heather. Heather and Heidi enjoy champagne, limousine and gondola rides while flirting with their driver.

The next morning finds everyone back in the kitchen and Chef declares each contestant will take a turn as a sous chef feeding the patron of Hell’s Kitchen. The kitchen will be staffed by the black jackets and each of the 5 remaining chef will take a turn at Chef Ramsey’s side. Andi and Aaron are Ramsey’s special guests at his table.

Heather is first up and turns in a solid performance. Next on the hot plate is Kimberly and she uses the wrong plate as noted by Andi and Aaron. Things don’t get better for Kimberly and Ramsey orders Kimberly to return the food cooked by Paulie. Over all, the team fails causing Chef Ramsey to ask Andi to return to the kitchen. He takes the group into the back room and yells at the team.

He tells the team to get it together or don’t return to the kitchen. Andi gets the food moving back into the dining room and the team returns to the kitchen with Paulie on the hit plate. Paulie struggles communicating the orders to the team and causes confusion for everyone. Paulie does no better than Kimberly and Ryan moves up to the hot plate.

Heather struggles cooking her scallops properly causing Chef Ramsey to once again cuss out the team. With Kimberly and Heather struggling to keep up, Kimberly says she is quitting. Ramsey pushes her to get back in the game or leave. The final straw is a plate with raw pancetta almost making it to a table. Chef Ramsey orders the entire team out of his kitchen.

Andi and Aaron are forced to return to the kitchen to serve the restaurant’s customers. Ramsey tells the team to nominate two contestants for possible for elimination. Paulie’s name is mentioned by all the women and it is decide he will be on the chopping block. After one the worst black jacket dinner services in the history of Hell’s Kitchen, Paulie is joined by Kimberly for elimination.

After a serious grilling by Chef Ramsey, Kimberly is eliminated from episode 14 of Hell’s Kitchen. In a surprise move Chef Ramsey then also asks Paulie for his jacket. No one saw this double elimination coming and the remaining contestants a left in shock!

However, they are not left with much time to ponder this latest development since Chef Ramsey issues the next challenge immediately. To be continued ….