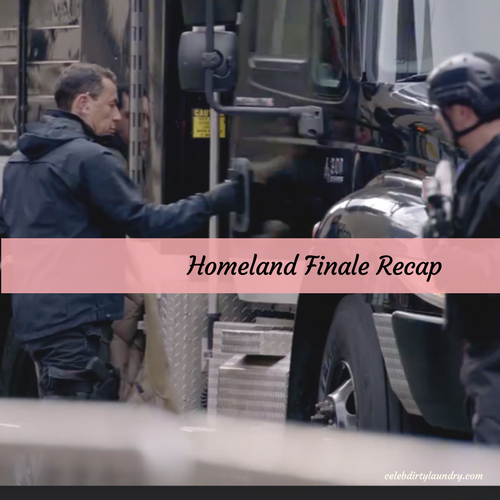 Tonight on Showtime their Emmy Award-winning drama series, Homeland airs with an all new Sunday, April 9, 2017, season 6 episode 12 called “America First,” and we have your weekly Homeland recap below.  On tonight’s Homeland Season 6 episode 12 as per the Showtime synopsis, “Season 6 ends as pieces fall into place.”

Tonight’s episode of Homeland kicks off with Dar Adal, he slips in to a restaurant for a discreet meeting in the back room. He has Senator Elian chained to a pipe, without any clothes on, in the restaurant’s freezer. He taunts Elian for keeping him in the dark, and says that this is his punishment.

Carrie is frantic at the explosion site, she fills Rob in on what happened. He says that President Keane is busy meeting with General McClendon about reinforcing her security – Carrie puts two and two together and realizes that McClendon was the special ops agent who just set off the bomb that nearly killed her and Quinn.

Meanwhile, at Keane’s hotel in Manhattan, McClendon has taken control. He tells the security team that they have to clear the mob out of the street first and shut it down. Keane is upstairs with Saul, watching the angry mob from her window. Keane confesses to Saul that she is beginning to wonder if the people made a mistake voting for her.

In the freezer, Elian has just been doused with a bucket of water, and he’s freezing. Dar demands to know what Elian knows about Peter Quinn.

Carrie and Quinn are trying to make their way through the angry mob of protestors so that Carrie can speak to Keane. Quinn slips in the back to try and find the team of Delta officers that are working with McClendon. Quinn spots McClendon and sees he also has snipers on the roof.

Dar calls McClendon and tells him he had an interesting chat with Elian. Elian sung like a canary, and he confirmed that O’Keefe has been setting up accounts to frame Peter Quinn and make it appear that he has been cyber stalking President Keane.

Inside the hotel, Carrie is filling Rob in on her concerns about McClendon – he’s clearly up to something, and is the last person they should trust to keep the President safe.

It looks like whatever is going to happen, is happening now. There’s a bomb threat at the hotel, and the security team evacuates Keane and her staff. While they are loading her in to an SUV, Dar calls Carrie on her cell. He warns her not to let Keane leave the building, it’s a trap to kill her. Dar reveals that they are framing Quinn for the bombing.

Carrie stops Keane’s SUV from leaving the parking ramp at the last minute. The two SUV’s in front of her, explode in the street, Saul was in one of them. Carrie and Keane rush back in to the hotel in one peace. Meanwhile, McClendon’s team is already searching for Peter Quinn outside.

Carrie and Keane jump in the back of an SUV, Quinn takes the wheel. They make a run for it in the SUV and there’s a barricade in the street – an entire army waiting to shoot and kill them. Luckily, the SUV is bullet proof, Quinn floors it right through the baricade, but he’s been shot and he’s losing consciousness.

Quinn loses consciousness and the SUV slams in to a car and stops. Peter Quinn is dead. Carrie and Keane are out of the kill zone though. Quinn saved their lives.

Brett O’Keefe goes live on the radio show – he goes in a wild rant about President Elect Keane, she has been officially sworn in, and McClendon and his troops, including other government officials involved in the conspiracy to take her down are all sitting in jail. Keefe shouts that there is a civil war in brewing.

Meanwhile, Carrie is working as a liaison to the President and intelligence department. Saul joins her for the meeting, and afterwards he corners her to talk in private. Saul is worried about Carrie, she didn’t even say a few kind words at Peter Quinn’s memorial, and she has been avoiding everyone. Saul knows it is only a matter of time before she crashes, and he’s worried about her. Carrie stomps off, she doesn’t need Saul worrying about her.

Carrie heads to President Keane’s office – Keane is grateful for everything that Carrie has done with her, and she offers her an official position as the Sr. Executive Advisor to the President.

Carrie is thrilled by the offer, and happily accepts as long as it is okay with Frannie’s case worker.
Saul visits Dar in prison. It’s the first time they have seen each other since Dar was arrested. Dar knows what he did was wrong, but he doesn’t necessarily regret it. He asks Saul to reach out to an old friend of his at GW and let him know that he’s okay.

Carrie rushes home and puts on make-up. There’s a knock on the door, it’s Max, and he’s wasted. He rants that something is a disgrace, but he’s not making much sense. Carrie sends Max down stairs and tells him not to make a sound, Frannie’s case worker arrives at the front door.

Carrie greets her and invites her inside, she gives her a tour upstairs of Frannie’s room, they make awkward small talk about Frannie’s collection of stuffed animals. The case worker seems satisfied and heads down stairs to fill out some paper work. The case worker raves that Carrie passed her home visit and she will let the judge know right away. Carrie reveals that she is considering moving back to Washington.

After the case worker leaves, Carrie heads downstairs to deal with drunk Max. She finds him passed out in the bed that Peter Quinn used to sleep in. Carrie gets rattled when she sees all of Peter’s stuff stil in the room and she grabs a trash bag and begins cleaning it all up. In one of Peter’s dresser drawers she finds a book, and there are photos tucked inside in an envelope.

Carrie is shocked when she realizes that Quinn kept a photo of her in personal possessions, and she breaks down crying. Max wakes up and comforts her.

Carrie gets a frantic phone call from Saul, he’s being arrested by the FBI and has a gun jammed in his face. Carrie turns on the TV and learns that President Keane has had dozen more members of the government arrested for her assassination attempt. Carrie calls Keane’s office and demands to speak to her, but she’s in a meeting.

Carrie heads straight to the office to speak to Chief of Staff David Wellington, she shouts at him that what they are doing is wrong and they can’t just arrest half of the government without authority. Carrie tries to talk to Keane, but she won’t open her office door. Security men escort

Carrie out of the building. It looks like Carrie won’t be taking that job in Washington after all.
Carrie heads to a nearby park and stares off in to the distance at the White House.