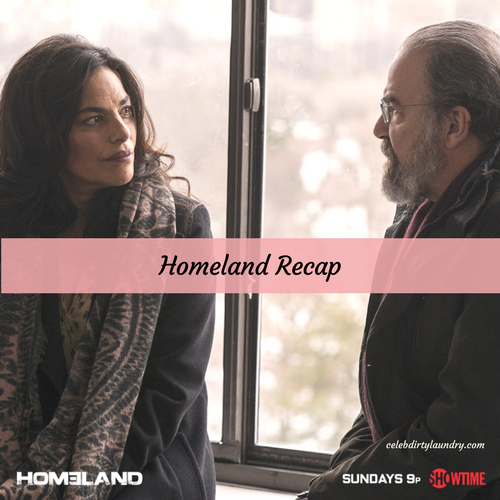 Tonight on Showtime their Emmy Award-winning drama series, Homeland airs with an all new Sunday, March 26, 2017, season 6 episode 10 called “The Flag House,” and we have your weekly Homeland recap below.  On tonight’s Homeland Season 6 episode 10 as per the Showtime synopsis, “Dar plays his hand; Quinn revisits his past.”

Tonight’s episode of Homeland kicks off with Peter Quinn, he’s wounded and bleeding from his run-in with Dar. He arrives at a diner in the middle of nowhere. The waitress recognizes him and calls him Johnny, she’s thrilled to see him. Nicki, the waitress, brags that she got married and asks Quinn about his old pals Dario and Shawn.

Quinn asks Nicki if she was working there last night, he’s looking for someone. Nicki can tell that he’s agitated and tries to talk to him but Quinn rushes out of the diner. He drives around the neighborhood and pulls over on a street to scope out a house.

At Carrie’s house, Max is telling her all about his new job and the thousands of fake social media accounts. He tells her that someone is paying O’Keefe to build a massive propaganda machine to manipulate public opinion. Carrie doesn’t have time to deal with it right now, she’s on her way to her visit to finally see Frannie.

Saul is walking the streets, and he’s extra sketched out, he thinks that someone is following him. He heads in to a jewelry store and slips in the back to a secret room to visit Pesach. Apparently, Pesach is out of town, but another man helps him. Saul picks up a duffle bag with a gun, passports, cash, and cell phones inside and an envelope full of diamonds.

Carrie gets dropped off by a car, when she climbs out, the driver taunts her and mentions her daughter Frannie. Carrie panics and calls the case worker, she reveals that Frannie is sick and headed to the hospital, she has a fever and they have to reschedule the visit.

Carrie heads in to the federal building to give her deposition to the department of justice regarding Dar and Saul in Berlin. Carrie is freaking out about the phone call about Frannie, she runs out of the room and says she can’t do this today. Carrie put two and two together and realizes that Dar is probably behind children services taking Frannie.

When President Keane learns that Carrie walked out of the deposition, she’s furious. And, then Dar shows up at her office. Keane isn’t shocked, she knows that Dar must have twisted her arm. The Department of Justice decided to try and track down Saul and get him to testify against Dar.

Keane is surprised when she sees the bruise on Dar’s face that Peter Quinn gave him. Dar acts oblivious, he tells Keane that he just stopped by to drop off a list of recommendations for office. Keane scoffs at his list, they exchange barbs with each other. Dar insists that he just wants to keep America safe. Dar warns her she doesn’t want to go to war with her own national security establishment, it’s a war that she won’t win.

When Dar leaves Keane’s office, he calls his buddy O’Keefe. He explains that his meeting with the President elect didn’t go well, they are going to have to put the propaganda machine to work.

Quinn heads in to the house that he has been scoping out. It’s where he used to meet with his old team years ago. While Quinn is recollecting, the men arrive for a meeting. He rushes in to the garage so that he doesn’t get caught. In the garage he finds a white van, just like the one the Sekou was driving that exploded.

AS soon as Carrie gets home from ditching the deposition, she gets a phone call from the case worker. She explains that it was all a misunderstanding, and Frannie is miraculously better, Carrie can come see her if she wants to. As Carrie is trying to leave her house, Keane and her security team show up. Keane presses Carrie and wants to know if Dar is holding her daughter over her. Carrie refuses to talk and storms out of her own house.

Saul arranges a super secret meeting with Mira, even though they haven’t seen each other in 2 years, Saul warns her that he is disappearing forever and the CIA will send agents to interrogate her about his whereabouts. Saul explains what’s really going on, Keane wants him to fall on a sword to take down Dar. Saul doesn’t want to be publicly humiliated and possibly even go to prison.

While Carrie is waiting in the lobby for her visit with Frannie, she sees videos all over the internet about President Keane’s son Andrew – it looks like Dar and O’Keefe have unleashed their propaganda machine. Frannie shows up with the case worker and she and Carrie are reunited.

Max is snooping around at work and sees Dar visiting with O’Keefe. He tries to get close enough to hear what they are saying. A little while later, O’Keefe’s henchwoman marches in to the office and orders Max to come with her ASAP, they know he snuck a phone in to the building.

Quinn sends his friend Clarice to Carrie’s house, she plays a video of Quinn for Carrie and convinces her to come to Queens to see him. Carrie is obviously confused, she thought Quinn was in jail. After Carrie leaves, Saul shows up to her house looking for her. When there’s no answer, he sneaks in to her house through the basement apartment to wait for her.

Saul searches Carrie’s house, and finds her work room – the walls are covered in news clippings about Sekou, Conlin, and Keane. He checks Carrie’s computer and find a video that Max sent her of Dar and O’Keefe talking.

Keane is not taking the videos and horrible comments about her dead son Andrew all over the internet very well. Rob finds her crying in her office and watching them over and over.

Carrie meets up with Quinn, he’s staked out across the street from the house where the meeting is being held. He has her look through a rifle to see the men in the window, and one of the guys inside is the man that was watching her and blew up Sekou’s van.