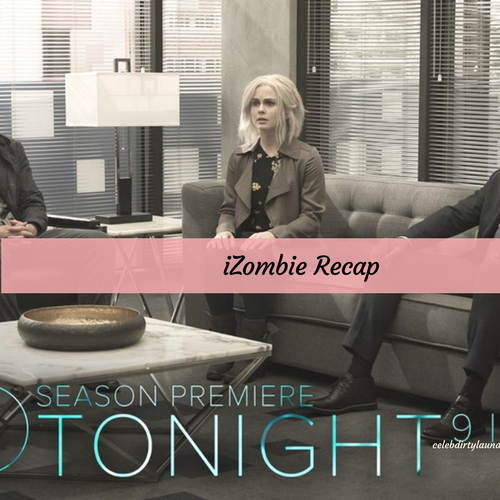 Tonight on the CW iZombie airs with an all new Tuesday, April 4, season 3 episode 1 called “Heaven Just Got a Little Bit Smoother” and we have your weekly iZombie recap below. On tonight’s season 3 premiere episode as per the CW, “Season 3 begins with Liv discovering there are more zombies living in Seattle than she previously believed and that a private military contractor is employing a small zombie army that is preparing for the day humans learn of their existence.”

Liv, Major, Ravi, Clive and Peyton are all sitting around together. Liv has a proposal – no more secrets. She tells them how she learned from Vivian that Seattle will one day soon become a zombie homeland. Liv wants to go and see her for more details. She couldn’t get many details what with the building about to explode!

Dannie is looking for money. Blaine doesn’t know what he is talking about. Dannie tells Blaine not to play dumb. He thinks Blaine is just trying to keep his business and his woman. Blaine is mad that he has been a gopher. Dannie wants the money and he will go away. Chief is dead and he was the last to have it. On his way out of the door, Dannie goes into the freezer and check the body for money. There is none.

Ravi and Major arrive at Major’s home that has been trashed and spray painted with the words – chaos killer! Major, Clive and Liv meet. They arrive at Vivian’s office. Liv tells her about what she told Major and Clive. Liv wants to know about Vivian and the zombie homeland situation. Vivian wants to have a plan for when humans discover them on what she calls D-Day.

She talks about super max, an island where all the zombies can go to be safe. Vivian tells them that her husband never wanted to make her a zombie so she scratched herself with his hand while she slept. Then one day he disappeared. She shows them the humans she saved – a tribe of children who are now zombies. She turned them to save them. One of the children named Wally knows Clive.

Clive can’t expect to keep quiet about super-maxed zombies ready to fight on D-Day. Ravi is also surprised. Ravi offers Liv brains. She only has a little soldier brains left and she needs it.

Blaine is working on extracting a brain. Peyton arrives. She has good news – Mr. Boss made it safely to Montenegro. Peyton is still jumpy though. He could come back. She wants to thank Blaine for saving her life. Blaine tells her not to bother – it was all his fault. He offers to be her comfort and protection. They can play cards. He asks her if they were once a couple.

Major grabs an OJ in a little café. He sees his picture on the front of the paper. He picks up his coffee – it has Chaos Killer written on the side.

Ravi and Clive talk about a cure. It will give them memory loss. If Major takes the alternative cure he will die. Ravi wants to create a formula that aids the memory loss. Clive wants to know how they decide who gets the cure. Liv arrives. According to what she heard on the radio, there was a witness to the killings. He is about to give an interview at the local radio station. They all race to get there. The witness is Billy Cook – a security guard at the Max Rager party. He saw what happened through the front gate. He details violence and people eating brains. Cliv and Liv stand outside the studio, tapping on the glass. Billy recognizes Clive and wants to know how he is alive. The radio host announces that Clive is there and that there is something the government wants to hide.

Clive and Liv leave. They are still listening to the show. The host starts to talk about a zombie apocalypse. Liv begins to cry. The brain she is on is wearing off. She shot her boyfriend, he is dead because of her. Clive tells her that he was already dead.

Peyton arrives home. She is on the phone. A friend tells her she needs to check something out.

Clive lays Liv on Ravi’s couch. Ravi pushes the bucket closer to her. She thanks Clive for listening to her. He tells her to stop beating herself up. He is alive because of her. Liv falls asleep. Peyton leaves Ravi a voicemail. She needs his company. She is scarred someone is tweeting her scary stuff. Major arrives. He found a job!

Blaine is home playing the piano and singing. Peyton calls him. She asks him if he has time to play go fish, maybe some gin rummy.

Dannie is defrosting a body with a hair dryer in his living room. The man’s eyes pop open. He talks talking. Dannie tells him Blaine is lying about his memory loss. He is Blaine’s enemy, so Dannie needs him so they can stink it to Blaine together. Dannie has a fingernail for scratching. He wants to get into the brain business and he needs some cash.

Liv wakes. She needs brains and aspirin. Dr. Karps, Ravi’s old boss who fired him, shows up with a body. She needs his morgue. They start dissecting. She sees brains in the victims digestive track. She has questions. A murder is called in. Ravi and Liv are happy to leave.

They arrive at the scene. The victim is missing fingernails, he was shot in the head and there is a Max rager can in his pocket. Liv walks down the hall to a child’s room. It has a license plate with the name Wally on it. Clive comes out. He is sad. All 3 victims shot in the head. Someone is going to pay he tells them.

Vivian gets the news and cries. She tells the other children about Wally. Liv pays her a visit. Outside she sees Major running with the soldiers.