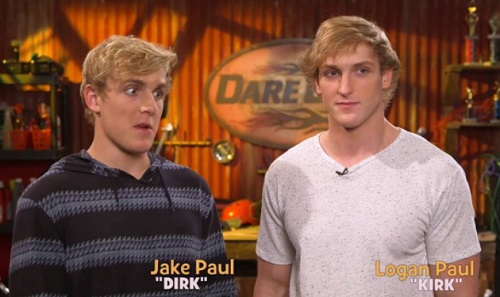 The Disney Channel has always been notorious for churning out conflicted child stars, but recent reports give credence to the rumors that they may have changed their ways and actually fired one of their stars, notorious party boy Jake Paul.

The 20-year-old Jake Paul first came to popularity on Youtube, and was hired by Disney to star on their show ‘Bizvaardvark’. However, after only eighteen months on the Disney Channel, Paul has already announced his departure from the network, claiming that the move is amicable and that he’s leaving because he’s ‘outgrown’ the network (after less than two years) and wants to move on with his career.

However, he conveniently forgot to mention the fact that just before he ‘departed’ from the Disney Channel, his party boy antics had come to light, with reports alleging that he would often bring friends over at all hours of the day and night, have massive parties that were a huge disruption to his neighbors, and pull stunts like jumping onto news vans outside the house. His neighbors would often complain about him, but even when the police showed up, Paul refused to accept any responsibility for his behavior.

As such, several reports are alleging that Disney likely fired him, even if his team is working overtime to spin it as something different.

His statement read, “Long story short…my team, Disney Channel, and I have come to the agreement its finally time for me to move on from the Disney family and Bizaardvark…I love my cast mates and will continue to support Disney but I have outgrown the channel and feels its time to move forward with my career.” His rep then added, “Now that he’s not on the show he can go on auditions for more mature roles.”

Right, because being on the Disney channel prevented the likes of Zendaya, Bella Thorne, Selena Gomez, and a host of other major stars from being able to pursue their acting careers. Except… it didn’t. Jake Paul’s off-screen antics may have led to him severing his ties with Disney, or perhaps he really was ready to move on – but either way, he seems to be laboring under several delusions on what his future in Hollywood holds, especially if he’s trying to move on to ‘mature’ roles. If that’s truly the case, perhaps he should work on changing his party boy image first.