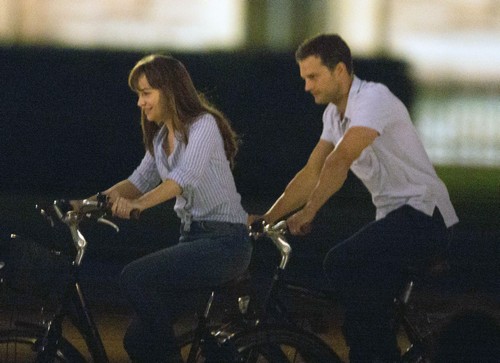 Dakota Johnson is once again making it clear that pretending to make love with Jamie Dornan in front of the cameras is the most awkward part of her job. Dakota, who plays Anastasia Steele in the upcoming ‘Fifty Shades Darker’ hints that she’s not really impressed with her Jamie Dornan love scenes.

In a new interview with Vogue Magazine, Dakota even said that her sex scenes with Jamie were ‘interesting.’ Although, Dakota did say that both she and Jamie are very honest with one another whenever it’s time to get naked in front of the cameras. They did it for ‘Fifty Shades of Grey’ and also for the upcoming ‘Fifty Shades Darker.’ Even though they work well as professionals, Dakota still had her doubts before filming and their ‘performance.’

Dakota explained, “I mean, what a gamble! What if he had turned out to be a total d**k? There’s no makeup. There are no clothes to tell you a bit about the story. There’s no jewelry to give you a clue about social status. So it becomes purely about the performance.”

This isn’t the first time Dakota has complained about having to film ’Fifty Shades Darker’ sex scenes. Back in April, she admitted that simulating her sex scenes was ‘tedious’ work. She also said it was uncomfortable having to film the scenes for several hours a day. So does this mean that she’s not impressed with Jamie Dornan’s acting in bed? Does Dakota regret signing up for the film? That’s what fans want to know.

So far Jamie Dornan has not made any comments about Dakota Johnson’s interview. As awkward and uncomfortable as the scenes are, he still wants to remain professional about it. Certainly, Jamie doesn’t want to talk about their on-screen sex scenes as much as Dakota has in her interviews. After all, Jamie is married to his wife Amelia Warner and has two kids. Dakota on the other hand is single. The last thing Jamie wants to do is upset his wife by making comments that he might later regret.

What do you think? Did Dakota Johnson humiliate Jamie Dornan with her comments? Are you looking forward to seeing ‘Fifty Shades Darker’ when the film hits theaters in February? Let us know what you think by dropping us a line in our comments section below. Also, check back with CDL for all the latest news and updates on ‘Fifty Shades Darker’ right here.