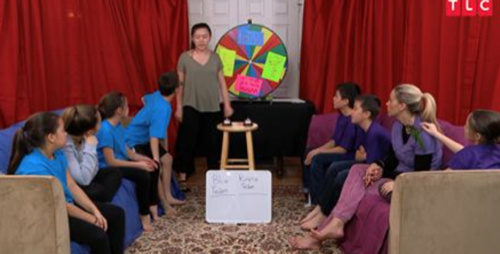 Tonight on TLC Kate Plus 8 returns with an all new Tuesday, January 10, season 5 episode 7 called, “Game Night” and we have your weekly Kate Plus 8 recap below. On tonight’s episode as per the TLC synopsis, “Mady hosts a game show for the family to answer questions about past episodes and adventures.”

This week on the season finale of Kate plus 8 Kate is planning a family game night of trivia using the history of their show. Maddy is going to run the show. Even though Kate has put Maddy in charge she is still calling the shots. Kate says “Each team will have team t-shirts and there will be a wheel that we will spin.” Maddy says “Even though she says that I’m in charge it’s really hard for her to step back and let someone else do it.” Cara decides to assemble the wheel before they head to the store to go shopping for supplies for the game.

When they finally get to the store Kate tells them “We have to pick team colors for our t shirts.” Kate decides to choose purple for her team. The girls head off in a different direction from Kate to get things for the game show. They find draperies and all types of cute decorations. Kate says “They don’t shop near me in the store anymore. Now we just text where are you and meet you at the register.” The girls are wandering throughout the store just looking and making sure they have everything. FInally they are ready to head home and get the house ready for trivia night.

When they get home chaos reigns as Maddy is trying to get everything ready. Maddy is frustrated because Kate is still trying to micromanage everything. Finally she tells her “Put that down and go sit down. You told me I could run it so let me do it.” The kids get their t shirts decorated and everyone is ready to go.As game night begins Maddy is trying to run things but as usual Kate is over ruling her. Finally Maddy tells Kate “Just act like a little kid. You can’t speak unless you are answering questions.” When the game show finally begins the kids are all having a blast. The blue team answers the first question correctly. The blue team goes up two questions to none by answering a question about the Harlem Globetrotters basketball game. When it was Kate’s turn the kids didn’t want to go up against her.

As game night begins Maddy is trying to run things but as usual Kate is over ruling her. Finally Maddy tells Kate “Just act like a little kid. You can’t speak unless you are answering questions.” When the game show finally begins the kids are all having a blast. The blue team answers the first question correctly. The blue team goes up two questions to none by answering a question about the Harlem Globetroters basketball game. When it was Kate’s turn the kids didn’t want to go up against her.

The kids say “It’s not fair playing against her. She remembers everything and we’re too young to remember some of that stuff.”

Trivia night continues and the blue team is leading four to two. When Alexis misses one of the questions she becomes so frustrated. Kate tells her “I love that face.” Kate says “This, for me, was not about winning. It was about bringing back fun memories.” As the game continues more qoutes and pictures are unveiled including the birth of crabs. Maddy asks “How old was mommy when you guys were born?” The kids had no idea. The question about Kate’s date quote sparked major controversy because the blue team felt it was unfair that the purple team got the point. Hannah says “We didn’t even get to watch the episode yet.” Kate says “Just like the old episodes are recorded, the new ones are as well.” Maddy says “Just give them the point. They are so far behind.” The score is 12- 8. Maddy says “They are so far behind I gave them a point out of pity.

Halfway through the game Kate breaks out a carnival popcorn machine and the kids all have popcorn for a snack. Kate reminisces about the trip to butterfly world. She says “They were so cute and adorable and they still let me dress them in adorable outfits, but Maddy still argued with me about holding my hand in New York City.” As the game continues Kate realizes that Maddy has rigged it so that Cara and her team would win. Eventually Alex doesn’t want to play anymore, but Maddy convinces her to keep playing. Kate says “We were doomed because I knew and I had to announce what the winners and the losers got.” Kate tells them “The winning team gets to choose our take out restaurant and the losers have to clean it up.”

Up next is the lightning round. The questions fly by quickly to get through the remaining questions. Kate says “I had no idea that this was happening. It was kind of like a fireworks finale.” All of a sudden there is an eruption between two of the girls when there was a conflict about one of the answers. The final score ends up 32 to 22 in favor of the blue team. Cara says “I think that Maddy is a good game show host except that her mouth is a little too loud.” Maddy says “I could say the same about you.” Kate says “Tha game show with no name was a great success and it shows that our family is big enough to do these things.”