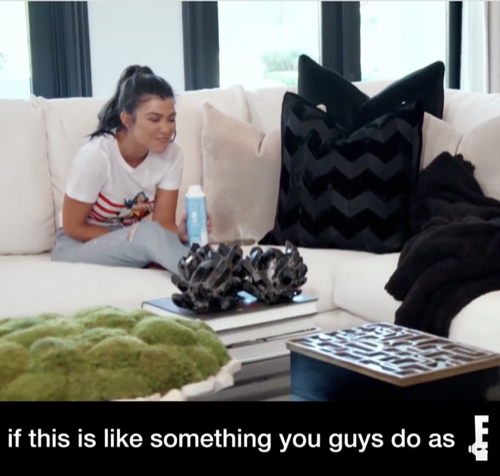 Tonight E!’s most-watched series Keeping Up With The Kardashians (KUWTK) returns with an all-new Sunday, November 12, 2017, season 14 episode 7 and we have your KUWTK recap below.  On tonight’s KUWTK season 14 episode 7 called, “Beauty Queen,” as per the E Online synopsis, “Kim anxiously preps for the launch of her new KKW Beauty line; Kourtney tries to adopt a new positive attitude; and Khloé scrambles to make arrangements for Tristan’s upcoming move to LA.”

Khloe went back to LA for the summer. She and her boyfriend Tristan had talked about it and they both agreed about relocating for the summer because Khloe had already given up a lot to move to Cleveland. But coming back home for Khloe had meant getting caught up. She saw her sisters and her friends more, however, a few things have changed since she moved. Her best friend was seeing someone new and her sister Kourtney had suddenly decided to be positive about life.

But Kourtney changing her demeanor had been new for Khloe. Khloe was used to her sister being pessimistic and the Debbie Downer. So she was liking Kourtney’s new outlook on life and had even borrowed a quote from Kourtney because she had liked it so much, but it wasn’t just Kourtney’s demeanor. It was also her relationship with Younes. Younes was the guy in Kourtney’s life and unfortunately, he lived in Europe. Therefore, Kourtney tended to see him only on vacation and tonight she talked about a trip to France.

Kourtney was going to France to meet up with her boy toy meanwhile the others were working. Both Kendall and Kim had to focus on their careers what with one doing a fashion show and the other marketing her new makeup line. But Khloe was busy with looking for a place to rent right in the city. Khloe and Tristan needed to stay close to the city for Tristan to practice and so they were forced to settle for a small place that they knew they would have to pay massive rent on. But Khloe had asked her family for help with apartment shopping and sometimes they were helpful.

There those like Kris that actually wanted to put in the effort and then there was Kourtney who couldn’t let Khloe complain because now always had something positive to say. But at the end of the day, Khloe had been forced to go house hunting on her own because the others were busy though Kris at least had a good reason for blowing Khloe off. She was secretly helping Tristan plan a surprise birthday party for Khloe and therefore she had to be secretive or risk ruining the surprise for Khloe. So Khloe got upset with her.

Khloe had purposely chosen a Sunday to go house hunting because she knew her mother was usually free on Sundays. But the fact Kris wasn’t free had made Khloe feel like her mother didn’t want to go and that simply wasn’t true. Kris had looked at apartments during her off-hours and had even suggested that she could stop by to see whatever place Khloe chose on her own to give her seal of approval. So the two had butt heads and Khloe had been a little disappointed, but everyone knew that she would be ecstatic about the party.

Nearly everyone had been invited and it had been about celebrating Khloe. Khloe was the one that always looked out for the others and so her party had been acknowledgment of what a good person she was because she deserved it. But there was one person that had been purposely left off the guest list. Scott hadn’t been invited to the party and had actually found about it through social media. So Scott had been upset by that because he wanted to know why he hadn’t been invited to what was a family event.

Scott was the father of Kourtney’s children and he had been in the Kardashians’ lives for more than ten years. But the lack of invite had just made him feel like no one considered him to still be family despite his and Kourtney’s breakup. So Scott had later brought up this issue with Kourtney. He wanted to know if she said something or if her family didn’t invite him because they knew Kourtney wouldn’t want him there. And so he confronted Kourtney about the invite seeing as she knew he didn’t have any other family.

But Kourtney came up with a lame excuse. She said she hadn’t wanted to be photographed going in and Scott said that wouldn’t have been his biggest concern. He said that he would have gone to the party to support Khloe as he’s done through marriage and divorce as well as everything else. So Kourtney tried to voice what she was really thinking and, when she couldn’t find the right words, she simply chose to shut down. She didn’t say anything else to Scott because she hadn’t been prepared for the conversation.

Afterwards, though, Kourtney had wanted to talk about what happened and had talked to Khloe. She told her sister that she hadn’t wanted to be negative and had chosen to just smile at Scott to release some of the tension. But Khloe told Kourtney that she needed to Scott about what she was feeling because it didn’t matter if it wasn’t good. It was what Kourtney was going through and she needed to be open with Scott. So Kourtney tried talking to Scott again with Khloe by her side and she was telling him about how she would have felt if he had been at the party. And he wasn’t getting it.

Scott heard Kourtney say that she didn’t want to see him at the party after he intentionally tried to hurt her. But he reminded her that it hadn’t been her party. It had been a party for Khloe and so Scott felt that he should have still been invited even if his relationship with Kourtney wasn’t all that great. So the two got angry at each other and then they started to flirt a bit with each other. And so Khloe couldn’t bother with them because she saw how dysfunctional Kourtney and Scott were and knew they weren’t going to change.

Meanwhile, Kim who launched her makeup line had faced some controversy about a picture she took and, rather than let that get her down, she chose to fix the problem before she continued on with her career.