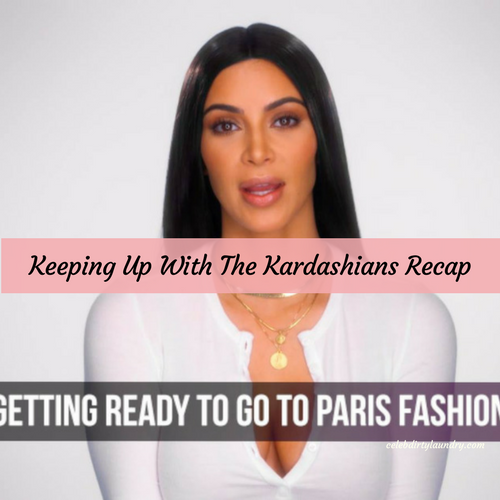 Tonight E!’s most-watched series Keeping Up With The Kardashians (KUWTK) returns with an all-new Sunday, March 19, 2017, season 13 episode 2 and we have your KUWTK recap below.  On tonight’s KUWTK season 13 episode 2 called, “Paris,” as per the E Online synopsis, “Kourtney is eager to experience Paris Fashion Week with Kim and see Kendall walk the runway for the first time, but their trip to the city of love takes a dark turn when Kim is robbed at gunpoint.”

This week on a highly emotional episode of Keeping Up With The Kardashians they show flashbacks of Kim’s return to New York after the Paris robbery. One week earlier in Paris, she is preparing to head to Paris for fashion week. Kim says “Paris means a lot to me because that is where I have so many amazing memories. It has been so much of the glitz and glam and I can’t wait.” Monica Rose and Kourtney show up at Kim’s house to help prepare the girls for the trip to Paris. Kourtney is excited. She says “This is my first time in Paris for Fashion Week and I am so excited to check out the clothes and be in the midst of the excitement.”Kris,

Kris, Kourtney, and Kim all arrive in Paris ahead of Khloe and Kendall. They head out to Bailman fashion house to choose outfits for Kourtney to wear while she is walking in the fashion show. Later, while they are at the apartment preparing for the show Kourtney reveals that she nearly missed the plane because she had passport issues and had to receive special permission from the French Embassy to be able to come to Paris.

Kanye has flown out to Paris to help Kim and the rest of the girls get ready for the show after seeing Kim’s outfit online. On the day of the Bailman show everyone is super excited for Kourtney to make her Paris Fashion week debut. She is being fitted at Givenchy fashion house. KIm says “I think Kourtney is so anti fashion because she doesn’t like spending hours getting ready.” Kim is telling some of the guys backstage about a prankster who had pulled a prank on her the day before. Kanye is working with the Givanchy designers to get Kim’s look together. Kim says “I don’t have the balls to ask designers for couture pieces, but Kanye does.”

Kourtney is also walking in the Givenchy show. Kendall says “I am excited to see Kourtney walk in the show. My mom has been to all of Kourtney’s shows, but this is my first time so I am super excited.” Kourtney says “I so badly want to embarrass Kendall by screaming and jumping up and down, but this isn’t that kind of environment.”

After the show everyone has dinner together then Kourtney and Kendall meet up to celebrate Kendall’s last night in Paris. Kanye is back on tour when he receives some disturbing news. He tells the crowd “I’m sorry. There is a family emergency and I have to cancel the concert.” Then he walks off stage.

Chaos erupts as Kim calls her sisters and her mother to tell them what happened during the robbery. Kris says “I just remember pulling up to the hotel and throwing my arms around Kim and saying thank God that she’s all right.” Everyone left Paris before the sun rose the next day. When they got back to New York Kim was still badly shaken and the press was hounding her. Kanye was with her having flown to Paris immediately upon hearing about the robbery. Kim is happy to be reunited with her children. Kris says “It is emotionally scarring to think that she could have been killed. For the rest of us it would have been emotionally scarring to think about losing her.” Kris then has to stop the interview.

Corey tells Kim “I’m just so happy you’re safe now.” Kim says “My life is totally changed now. Howard Stern says I should go to jail if this is staged.” She looks devastated as she asks “Why would I want to stage this? Why would I want to give up my ring?” Corey tells her “Unfortunately that’s the world we live in these days.”
Everyone is at Kris’ house. Kris asks Kendall “How are you feeling?” Kendall says “I’m exhausted. Kim called me and was literally screaming at the top of her lungs HELP ME!” Khloe says “I called you five minutes after that.” Kendall says “That was you on the phone with her when I tried to call her back?” Kourtney nods. Kris recalls her reaction after getting the call from Kim. She says “I literally was throwing on my clothes as I was running down the hall and all I could think of was to grab a blanket because I knew it was Kim’s favorite.”

Khloe goes to visit Kim when she comes home from Cleveland. All of the sisters are together and talking. Khloe asks Kim “How are you sleeping?” Kim tells her “I’m ok. It’s hard because Kanye is on the road and he wants me with him.” As the girls continue talking Kim tells them “I heard pounding up the stairs and I thought it was Kendall and Stephanie coming back from the club drunk.” She goes on to describe what happened. She says “They had the Concierge who acted as our interpreter because I couldn’t understand them and they couldn’t understand me.

They wanted my ring and I told them it was on the table. Then, as they were tying me up they started demanding money. I told them I didn’t have any. That’s when I saw the gun. They dragged me to the top of the stairs and I wondered if I had time to make it to the elevator and what if the elevator door didn’t open in time.” She then recounts how they duct taped her, picked her up placed her in the bathroom and ran. Kim said ” I have a family and I was worried that Kourtney would have a normal life after coming in and discovering my dead body on the bed. I just kept wondering if this was the moment that I was going to die.”