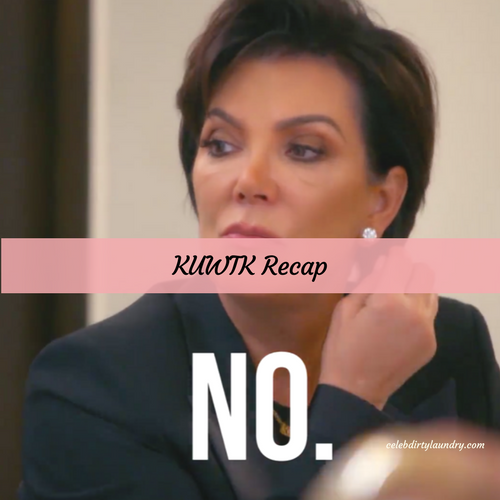 Tonight E!’s most-watched series Keeping Up With The Kardashians (KUWTK) returns with an all-new Sunday, March 26, 2017, season 13 episode 3 and we have your KUWTK recap below.  On tonight’s KUWTK season 13 episode 3 called, “The Aftermath,” as per the E Online synopsis, “Kim struggles to cope with frightening reminders of the robbery in Paris; Kendall wrestles over her decision to prosecute an unstable trespasser; and Kris makes it her mission to heighten security for the entire family.”

This week on Keeping Up With The Kardashians Khloe is preparing for the first press interview since Kim’s robbery in Paris on the Ellen DeGeneres show. Khloe says “I’m nervous because I am the first person to do press since the robbery and even though we have to move forward with life it has drastically changed.” After the interview, Kris talks to Khloe and tells her The day of the robbery in Paris Kim said that she set an alarm on her blackberry. She’s never done that before.” Khloe asks Kris “How are you doing since the robbery?” Kris tells her “I just feel relieved because Kendall and Kourtney could have walked back into that house at any moment and the outcome could’ve been very different. I could’ve lost three of my daughters that night. It makes me think how precious life is.”

Later that day everyone is having dinner at Kim’s house. Kris asks Kourtney to say grace. The whole family joins hands and Kourtney says grace. After she is done Scott says “You were a bit monotone with Jesus.” The whole table laughs and Kris says “Yeah you would think you could muster up a little more enthusiasm.” While they are having dinner Kris mentions to Kim “You guys should really get these windows tinted from the inside so that people can’t see in.” Kim says “I like them open that way so that I can see out.” Kris is worried about their safety. While they are sitting at the table Kim receives a disturbing message on her phone. Some people have accused her of faking the attack and wished her dead. These messages upset her greatly.

Kendall is getting ready to go home. Kris asks her “What are you doing tonight?” Kendall tells her “I’m hanging out with friends.” Kris asks her “What about that guy who broke into your house?” Scott says “What happened?” Kendall tells them about a man who followed her home, banged on her car window and tried to talk to her. Kendall says “He was arrested and is in jail awaiting trial.” Scott says “How scary.”

Kim is still traumatized by the events in Paris and seems to be very withdrawn. Kris is worried about her and tells her “I think you need to talk to someone so that you don’t become overwhelmed. Kris has canceled events that were scheduled including Kendall’s 21st birthday party. Kim says “I don’t think anyone should have to cancel anything because of me. It happened to me and I am dealing with it.” Kris tells her “You are strong and you deal with things by bottling them up, but this time it may not be the best idea.

Kendall is really upset when she finds out that she has to testify against the man who broke into her house. She tells Kris “I feel sorry for him. When I found out he had mental issues I just wanted to help him.” Kris tells her “You have to deal with every threat. You have a very big heart and people will try and take advantage of that.” Later Kris goes over to check on Kim and she is very upset and crying because she is having flashbacks of the robbery. Kris tells her “That is to be expected. You are a strong woman, though.” She then asks the cameras to stop filming.

The next day Kim is talking to Kris and she is telling her about Kanye’s return and how his change in routine and the way he came up the front stairs upset her. Kim says “I’ve always been aware of my feelings and emotions and never thought therapy was right for me, but I want to be all right for my husband and my kids so I know I have to do something.”

Kris, Scott and Corey are watching footage for a video that Kanye is producing for Kim for her birthday. Kris is especially moved by the footage. Kris is crying. All of a sudden one of the assistants comes in and lets them know that there is a disturbance at Kendall’s house. Corey jumps on the phone and has one of the guards ride by her house to check it out. Kris says “I think I’ll finally calm down when they all feel safe again. I don’t even care about myself.”

Kim and Kendall are talking and Kendall tells her sister “I don’t think I’m going to testify.” Kim asks her “Why?” Kendall says “I feel guilty.” Kim tells her “I can’t sleep unless there are four guards outside my house now. Ever since we got back from Paris our lives have changed and we have to protect ourselves. You have to set the tone for it now.” Kendall still doesn’t seem convinced. She says “Can’t we just put him in a hospital somewhere so he can get the help he needs? I just don’t want to face him.” Kim talks to her for a few more minutes and finally, Kendall agrees to testify.

Kim and Kourtney call Kendall to check on how her testimony went. Kendall tells them “My attorney asked me some questions and then his attorney didn’t have anything to ask me so he just confirmed my testimony.” Kim tells her “They reinstated the restraining order for five years.” Kendall seems surprised that they know this detail since she hasn’t told them anything about it yet. She asks them “How do you know this?” Kim tells her “It’s on TMZ.” Kim also tells her “There is also a rumor that you and Scott can’t quit each other.” Kendall laughs and says “That picture is from when we had lunch together.”

Kylie called her mother freaking out because she thought someone was breaking into her house. Kris immediately calls Corey. He tells her “I’m fourteen minutes away. I’ll be there soon.” Kris tells him “Maybe I should go over there.” Corey tells her “No, if there are intruders there then what are you going to do? You can’t protect yourself.” Later the alarm company lets them know that there was no break in at the house. When Corey get home Kris thanks him for going over there. Corey rebukes her for panicking and tells her “I love you and I want to help you protect your kids. We need to hire the right people.”

Caitlyn goes to visit Kendall. She asks Kendall “How was the case? Did you testify?” Kendall tells Caitlyn “I did, but it was really sad to see him. He looked pitiful.” Caitlyn tells her “Yes, but you have to do what you have to do to protect yourself.”

Everyone is gathering at Kim’s house to celebrate her birthday. After the events in Paris, Kris feels like it’s necessary to give Kim something happy to focus on, so they are throwing Kim a surprise birthday party. Rather than waiting in the house to surprise her everyone decides to gather in the driveway and greet her. Everyone is super excited and Kim is happily surprised. Kim says “It was great to see my brother and my best friends show up where I feel safe.” Kim says “I just wanna redidcate my life to my kids. I was lucky to have my dad for 22 years. I want my kids to have me for much longer than that.”