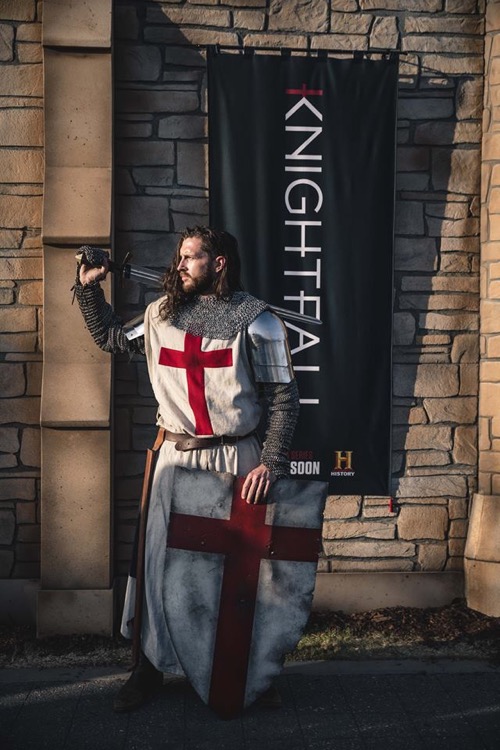 Tonight on HISTORY their new drama series Knightfall premieres with an all-new Wednesday, December 6th, 2017 episode and we have your Knightfall recap below.  On tonight’s season 1 episode 1 premiere called,  “You’d Know What to Do,” as per the History synopsis, “A chronicle of the 14th-century demise of the Knights Templar, who were persecuted, tortured and burned at the stake in 1307. In the premiere, Landry fears for the Order following the Battle of Acre, but the Templars take up their swords again when the blood of a brother is shed.”

The Holy Land, 1291
It is the Siege of Acre – Night 43. Landry (Tom Cullen) meets with Rashid (Akin Gazi) who asks for refugee in the name of Allah; he questions if their God is listening as they have lost Jerusalem and every Templar stronghold in the Holy Land and will lose the Grail too. Rashid says they have 100,000 men with more coming, and the forces of Egypt and Syria. Landry stays confident saying they have God on their side. Rashid says the Sultan is no longer listening, as he wants the Grail, he demands they surrender or die; those are the choices. Landry tells him then they shall die.

At the Templars prepare for war, they are reminded that nearly 200 years ago, 9 knights founded their order to protect Pilgrims on the road to Jerusalem and today they have a stronghold in the Holy Land and they will never relinquish it. It is more than just this city, and the men and women; today, they fight for the Grail. Every life they take, but no more and remember the answer to God just like they fight for God by the grace of God. They exit the walls and attack with a great formation, taking everyone and everything down in their way.

Godfrey (Sam Hazeldine) tells Landry to get the Grail, as there is too many of them. All is lost and they will meet at the docks, ordering him to go now! As they open the tomb and place the Grail inside the chained chest, Landry learns they have been betrayed and the docks are compromised. Landry hears someone cry out for help, he orders the knights to get the chest on the ship and he goes back to help. The mast is lowered as Landry attempts to make it back to the ship, a knight jumps in front of him, taking an arrow in the knee saving his life; they leave the port, watching as the city takes mass devastation. They promise to return just as their ship carrying the Holy Grail is hit and sinks to the bottom of the ocean and everything is lost.

15 Years Later, Paris
Landry walks the halls when King Philip (Ed Stoppard) attempts to catch him off-guard. William De Nogaret (Julian Ovenden) interrupts them, which doesn’t please the king but he asks Landry to go see the Queen who doesn’t leave her room much these days. He tells De Nogaret to find another way to get money and not from the Templars; he suggests taking the money from the Jews, but Philip says he isn’t that kind of King, he prefers to be loved by the people.

Landry wanders the city, where he hears someone talking about how the Jews will steal their babies and crucify them. Landry is reminded of his vows of chastity as he looks at a beautiful woman. He joins the brothers, they pray and then Tancrede (Simon Merrells) talks about finances; each of them suggests Landry talk to the king about repaying the money he owes them. Landry says they are warriors, they are supposed to fight for the Holy Land and give safe passage for pilgrims; but instead, they ignore the treatment of the Jews. He is interrupted and told the Jews are not their problem, as they are not to involve themselves in city affairs.

Landry is furious, feeling it has been 15 years and the Sultans are fighting among themselves, the Mongols are attacking from the East and if they act now they could do it. Godfrey says it is for God to decide; he tells Godfrey he loves him but God has forgotten them. Godfrey notices an orange on a wall, and says he must leave immediately, he tells Landry he is to be Master in his absence and he is right, they must protect the Jews, but won’t explain anything else.

Landry feels something is wrong with Godfrey and he is right when he suddenly is ambushed in the forest. A young girl and her boyfriend are talking when they see a Templar knight begin chased by highwaymen; he shouts for Marie to go, as Godfrey is told to talk. Parsifal (Bobby Schofield) saves Godfrey from immediate death but he still gets hurt and knows he is dying. He asks Parsifal for his sword, telling him to take the sword to Paris and find the knight named Landry there and he will know what to do. He says God’s Kingdom depends on it. Marie is worried about him leaving, but he feels he needs to, riding off with Godfrey’s sword on his back.

Landry climbs the wall where the woman, Isabella (Sabrina Bartlett) lives. He undresses, saying he is a lonely warrior. She approaches him, saying he is a monk who shouldn’t he there. He picks her up and makes love to her as they both exclaim how much they missed each other. Landry talks to her about Godfrey leaving the city and how worried he is about him, saying he has been a father to him and he isn’t a good son to Godfrey. He admits to her that she is the only woman he has ever loved. Outside, the man continues to talk about Jews, mocking their looks. A Jew approaches him, hugs him and says “Shalom my friend!” and stabs him repeatedly in the back as the crowd screams.

Parsifal arrives in Paris and waits for Landry to meet with him as he holds the bloody sword that belongs to Godfrey. He explains what happened to him and Landry says he needs to be laid to rest in the temple, after the funeral he deserves. Parsifal wants to know what Godfrey meant when he said Landry would know what to do. He is dismissed after Landry thanks him. Tancrede wants to know what Godfrey meant, but he has no idea. Landry is informed that there has been a murder in the city, a Jew has killed a Christian and people want revenge.

De Nogaret comes to see King Philip in the cathedral after he is done praying. Philip says the church holds a special place in his heart as the queen and he were married there. She was just a girl then and how she has flowered since then. De Nogaret tells him that a Christian trader has been stabbed and killed in the market square in broad daylight; Philip says he should be dealt with in the usual way but DeNogaret feels matters have gone beyond that as the people are angry and won’t stop until every Jew in the city is dead. Philip sides with his wife on this one, citing that the city needs the Jews. De Nogaret says he agrees but they need to protect them and the best and only way to do that is to force an evacuation.

Isabella hides on the stairs as she overhears that De Nogaret has managed to convince the King to evacuate the city of all Jews; he tells the highwayman to rob them of their money and then kill them. When asked about the children; De Nogaret tells him not to bother sparing them either; Isabella scurries off before they can spot her.

While being escorted back to Parsifal’s farm, the Knights do not treat him too kindly as the edict is read in Paris that the Jewish Quarter is to be cleared. Landry watches as Isabella signs that she left a message for him to read. He quickly finds it and informs Tancrede that the jews are all being set up to be slaughtered. He is reminded they cannot step into city affairs. He is unwilling to reveal his source and Landry enforces his decision as Master when Tancrede protests.

The Christians heckle and throw things at the Jews as they carry their few possessions as they leave the city. As Godfrey’s sword is being cleaned, there is a rattle and inside a blue stone is discovered by Draper (Nasser Memarzia) who immediately does the sign of the cross when he places it inside an open slot inside his lamp.

Suddenly the Jews are surrounded by Highwaymen in the forest, but thanks to Landry listening to Isabella’s warning, him and the Templar Knights arrive with swords and shields. Some of the people, including a brave woman named Adelina (Sarah-Sofie Boussnina) picks up a large stick and joins them. When they have defeated them, Landry thanks her for being so brave as her father says the Templars saved them once before. He gives them papers that would give them safe passage.

Parsifal returns to the farm and finds Marie tied up to a wagon with an arrow through her neck. King Philip is in good spirits when De Nogaret arrives; he dismisses his dressers and informs him that the Jews were set upon on the road. Philip tells him that he is not weak and if he finds out De Nogaret disobeyed him, he will see him hanged.

King Philip and Queen Joan (Olivia Ross) dine with the nobles that night as Draper shows Landry the message that Godfrey left them. Inside the blue stone is the Fleur-de-lis; meaning the Grail is in France!