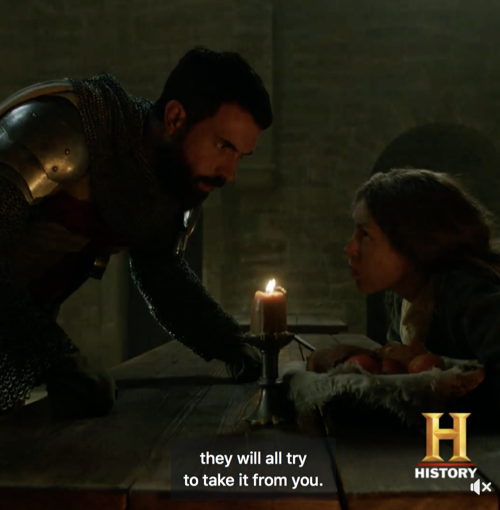 Tonight on HISTORY their new drama series Knightfall premieres with an all-new Wednesday, December 20th, 2017 episode and we have your Knightfall recap below.  On tonight’s season 1 episode 3 called,  “The Black Wolf and the White Wolf,” as per the History synopsis, “On the Pope’s orders, Landry and Tancrede travel to investigate the Holy Grail’s whereabouts. Meanwhile, the plotting behind the royal wedding becomes deadly.”

Knightfall begins with Godfrey’s (Sam Hazeldine) funeral mass and burial. Meanwhile, queen Joan (Olivia Ross) is in her bed, vomiting, when she suddenly realizes she might be pregnant.

Pope Boniface VIII (Jim Carter) returns to the chapel were Draper (Nassar Memarzia) tells him he has tried every chest and lock in the temple, but can’t find where the key belongs to. Tancrede (Simon Merrells) says he was going to cancel training with King Philip (Ed Stoppard) but the Pope insists Landry (Tom Cullen) go because a friendship with the royal family is important and his absence could invite questions.

Outside, Gawain (Padraic Delaney) is with the initiates and informs he is their new trainer. He reminds them to never step out of line, their strength is as brothers, without they are lost. He wonders where Parsifal (Bobby Schofield) is. He finds him in the barn crying and tells him to go home as he isn’t ready to be a night; when he protests, Gawain hits him and steps on his hand; telling him to conquer the pain and make him the master of it. Gawain tells Parsifal he must become a monk before he becomes a warrior and today they start with charity.

Landry and King Philip spar, but he shares that he is disheartened that the Queen will not come to his chamber. He tells Landry he wouldn’t understand what its like to feel Joan’s passion and then be away from it. He has given her everything and is now at his wit’s end. Philip says something is wrong, suggesting Landry should talk to her, he says he is a monk and wouldn’t have any grounds to talk about it. Philip says he will arrange something for them to speak tonight.

William De Nogaret (Julian Ovenden) is saying the words of the communion and asks Nicholas (Edward Bourne) if he believes. He says he does, but De Nogaret says it is all gibberish, saying he doesn’t believe in religion but he does admire it.

King Philip presents Robert, Earl of Oxford a horse after they denied his daughter, Isabella (Sabrina Bartlett) hand in marriage. He warns the King that if he doesn’t fix this, there will be war. King Philip says if he wants a war, then they will have one. He tells De Nogaret that they will need Catalonia behind them and he must tell Rodrigo (Enrique Arce) to inform his King.

Queen Joan learns she is pregnant but asks for the news to remain quiet until her belly swells and the baby is strong. Sophie (Amelia Clarkson), her handmaid, says the news will please the king, but the Queen reminds her that she hasn’t shared a bed with the King in over two years. She isn’t sure what she is going to do about the baby.

Draper discovers the key doesn’t go in something, but rather ON something. He places it on the chalice and shines the light down on the ground and it shows another crest of a family they know, both Tancrede and Landry feel they have found the grail.

Parsifal is not pleased that he has to hand out bread to the beggars and clean out the bathrooms; he wants to learn to swing a sword. Gawain tells him, his first lesson to becoming a knight is to shut up and follow orders. Someone steals the bags of bread and he is outsmarted when he sees it is a girl and she hides in the trap under a house.

De Nogaret meets with Rodrigo, who says they will support France but Catalonia will not die for them. Joan tells Sophie to go to purchase a tonic for her; Sophie knows what it is for and warns her that her sister used it and made her lose the baby but it nearly killed her and is blind now. Joan explains how she cannot cross the King as she once stayed behind to listen to a lute player and he met with an highway robbery, where all his fingers were broken and never played the lute again. She begs Sophie to go as King Philip enters the cathedral, he asks Joan to stay and pray with him.

Tancrede and Landry approach the farm but wonder how long Godfrey knew the grail was there. They race towards it when they notice how run down the place is.

Landry and Tancrede are at first told to leave, but when the man learns that Godfrey is dead, he reveals that Marcel DeCoul was Godfrey. He shares that the Grail was not returned to the temple because the last time it was in the care of the temple it was nearly lost forever. Landry is questioned how can they protect the Grail, when they don’t even know what the power is. He warns them that the cup is so much more than a symbol and they share that Godfrey never told them how he became a Templar.

They are told how Marcel (before he became Godfrey) killed his brother because he inherited all the land and titles, hated his success. Marcel stabbed his brother all the way through his belly but Raymond survived but lost the use of his legs; despite that, he forgave Marcel. Marcel was so moved that he turns his life to God and that was how Godfrey was born. He shares that when Godfrey got possession of the Grail, he gave his brother one sip of wine from it and his wounds were completely healed and he could walk again; there was only one witness. He undresses, revealing he is Godfrey’s brother, Raymond!

Raymond picks up a scroll and says it is for Landry only, but before he can give it to him, he is stabbed through his back by a sword and someone dressed in black escapes with the scroll as Landry holds Raymond. Tancrede demands the scroll as Landry learns Godfrey didn’t tell him about the scroll to protect him too. Raymond dies before Landry can tell him that he loved Godfrey. A dagger hits the wall above Landry’s head and he gives chance. The voice tells him that the Grail is not his to find, Landry says he knows the voice and demands to know who he is. He stabs the man in black but the scroll is burned before he can save it; the other person in black jumps down into the well before Tancrede can get them.

De Nogaret talks to Robert of Oxford, saying asking for troops is too much for Rodrigo, revealing that the eve before war, King Philip will have to turn to England and give Isabella’s hand to Prince Edward instead.

The Knights bring in the man, Landry and Tancrede want to save him as the others want him dead. Queen Joan looks at the vial, as Sophie begs her to reconsider as a child is a blessing. Joan says it wouldn’t help if she told the father as there is no way for them to be together, but Sophie encourages her to tell him and dream of a life together.

Landry sits with the Pope, admitting that he thought when they lost the Grail that God abandoned them but it was Godfrey who lied to them. Landry confesses that he replaced the emptiness and broken his vows as a Templar. The Pope says he isn’t the first but Landry says he it is with a friend’s wife and he shouldn’t be the leader; the Pope says he needs to end this business immediately, find his way back to God and find the Grail.

Rodrigo’s assistant confronts William De Nogaret on his deceit, so in front of everyone, he says that he is not a servant, in fact, he is Prince Lluis (Marcos Franz) of Catalonia. He asks for forgiveness from King Philip because he wanted to be sure if they were genuine; he promises them that France will not stand alone, as they will fight shoulder to shoulder as allies and family; everyone claps as De Nogaret bows his head.

Draper instructs one of the initiates to change the dressing on the wound every hour and to get him if there are any changes. Upstairs, Landry is honored with a feast for becoming the new Temple Master; De Nogaret sees that Gawain is not pleased and barely raises his glass as the King toasts to Landry, he wants to know why but Gawain says he is not the man people think he is and he brings the word “heretic” back to the temple.

Robert, Earl of Oxford approaches De Nogaret, who promises to think of something better than killing him, as Robert is concerned about Prince Lluis stepping in and offering his country’s help.

Parsifal catches the same girl who stole the bread from his earlier, she steals a purse full of coins. He demands her to give it back but she says it will feed an entire family. She is surprised, saying she didn’t know Monks wore jewelry; he reminds her that he wasn’t a monk yet and takes the purse back. Landry and Queen Joan dance among everyone else in the room, as per the King’s request.

He tells her the Grail is in France and as she begins to talk about their dream of being together; he interrupts her saying he is Master now and responsible for many men and her future is the wife of a king and his as a Templar. He says she will always be tied to him as the mother of his children, what hope is there? She runs off. King Philip wants to know what she said and Landry tells him he needs to talk to her about it as he should not interfere with their marriage. The King and Queen join each other in a dance, both very somber.

Draper is with the man, who is now awake. He is saying,“The black sun will burn us. The desert storm will burn us and the world will turn black!” Draper says it is some sort of prophecy and when Draper asks him about the Grail, he just keeps telling them they will burn. Outside in the rain, the girl has Parsifal’s necklace, saying it is valuable to him and when he comes to get it, the man can have him.

Landry returns and learns from Tancrede that the man is talking, saying that the Grail will destroy the world and will only talk to him. They go to the room and find him dead. Landry orders the temple to be sealed and no one is allowed to leave as there is a murderer in their midst.