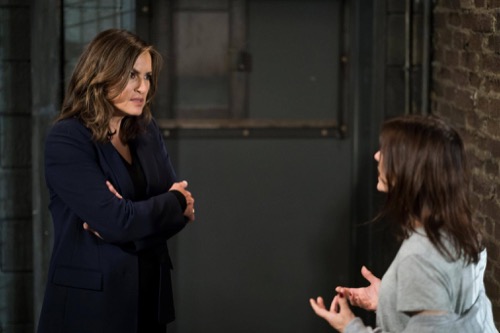 Tonight on NBC Law & Order SVU returns with an all-new Wednesday, November 29, 2017, episode and we have your Law & Order SVU recap below.  On tonight’s Law & Order SVU season 19 episode 7 as per the NBC synopsis, “Benson must disclose the secrets of her past to help a rape victim recall the details of one terrible, traumatic night.”

The show opens with a group of children at a museum. One of the girls finds a woman lying on the floor behind a statue crying. The paramedics are called and take the woman to the hospital. She tells the doctor she has been raped. Benson gets to the hospital to interview the victim but she tells her there is no point because she can’t remember anything. As they talk she does remember her attacker smelled like Old Spice just like her father. Olivia tells her they will figure it out together. The woman, Lauren, remembers that she went to the flower shop and then to work. Rollins and Cressie go to Lauren’s place of employment to see if they can get clues on who may have attacked her.

They learn that her father’s funeral was the day of the rape and that she has a sister who is a lawyer. They go to interview the sister. When Olivia offers her condolences to Lauren she begins to talk about how she and her father used to go to the museum every Sunday. They would then go out to dinner and have calamari. Last night the calamari was not very good. Olivia helps her realize she went out to dinner last night. As Olivia listen to her talk she points out that Lauren talks a lot about predators and she wonders if she has ever been raped before. Lauren than turns the discussion to Olivia and asks doesn’t she feel like a victim ever. Olivia says “no.”

Lauren’s sister, Leah comes to the station. Lauren remembers that her attack had an apartment on Chelsie. She remembers thinking if she could just grab the scissors during the attack. Olivia sends Cressie and Finn out to the bars in Chelsie to see if anyone remembers seeing Lauren. Lauren remembers that the man who raped her was wearing a watch just like her father’s. Finn finds a bartender who remembers seeing Lauren. She was at the bar and left with a man named Greg Harvey. Finn sends a picture of him to Olivia who shows it to Lauren. She gets upset at the sight of the photo.

Lauren gets angry at Olivia and asks why she does what she does. Does she have a Jesus complex? Lauren then says Olivia doesn’t know what it is like to have your legs forced open and have someone pierce your soul like a knife until your soul is dead. Olivia promises her that her soul is not dead. Finn and Cressie serve a warrant on Greg Harvey’s home and find him dead with a pair of scissors in his neck. Lauren’s fingerprints were on the scissors. Olivia calls Barba and brings Leah in to speak to Lauren. She tells her that the police think she killed the man who raped her.

Olivia questions Lauren about Greg and tries to determine when she stabbed him. Lauren again begins to talk about her father. Lauren then talks about her hatred and screams at Olivia, asking how she handled her hatred. Olivia says she beat him with a metal rod. Lauren asks if Olivia killed him. Olivia says no but asks if Lauren killed Greg. She responds that she doesn’t remember. Cressie and Barba watch and listen to the interview through the two-way glass. Lauren then asks her sister if she remembers the time they painted the poll house. Leah tries to stop her but Lauren continues and asks if Leah remembers how angry their father got. She then says she returned to the pool house and looked through the window. She saw what was happening between Leah and their father. Leah gets angry and leaves the room. As she leaves she says she is glad the old bastard is dead.

Olivia tells Lauren that she thinks she stabbed Greg because he reminded her of her father. Lauren admits that he father began having sex with her when she was just six years old. She asks Olivia when her father started having sex with her. Olivia tells her she is confused. She never even met her father. Lauren continues to talk about her hate for her father and tells Olivia that she knows she feels that hate too. Finn comes in and tries to stop the interview but Olivia send him away. Olivia closes the blinds and turns off the intercom. She tells her that her father called her once but they didn’t talk. He had a son and a family.

Olivia says she has a brother named Simon. Simon had everything. He had a mother and a father. Lauren says he loved his new family but not you. Olivia says he never even looked for and he killed himself before she ever met him. Lauren then tells Olivia the story of the first time his father abused her. She says they made love and it was beautiful. Olivia tells her she was just six years old and it wasn’t beautiful. She was abused and it was wrong. Olivia then realizes that Lauren wasn’t abused by her father. He picked Leah over Lauren. Lauren says she is right and that she knows she is going to prison for killing Greg. She admits that she waited until Greg was asleep and then she stabbed him. She just wanted her daddy to love her. Lauren is arrested.