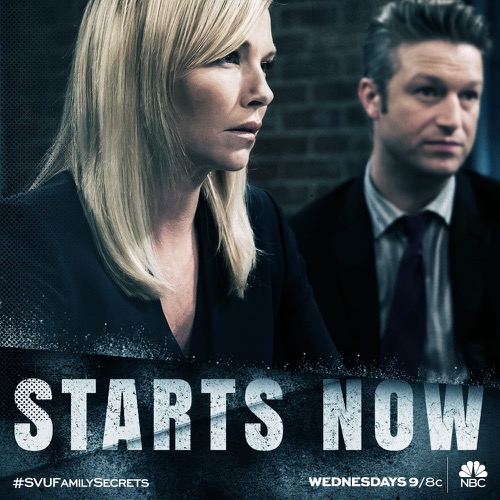 Tonight on NBC Law & Order SVU returns with an all-new Wednesday, January 18, 2017, episode and we have your Law & Order SVU recap below.  On tonight’s Law & Order SVU season 18 episode 9 as per the NBC synopsis, “A powerful family unite and close ranks when one family member is accused of rape by a bartender.”

Tonight’s episode of Law & Order SVU kicks off at a mansion – it’s Lawrence’s birthday party, he owns a company named Avalon. After his cake is served, Lawrence gives his grandson advice about picking up girls.

So, he flirts with the bartender. After the birthday party is over, he convinces the young bartender to have a drink of “the good stuff” from downstairs with him. The next morning Sarah wakes up in the house with her pants around her ankles.

The bartender shows up at the precinct, she tells Olivia that she thinks she has been raped – but she can’t remember anything. Olivia takes her to the hospital to be checked up and get a rape kit.

Sarah’s rape kit comes back positive for semen, and she has some bruising. Sarah tries to remember what happened, but the night is all a haze. Sarah remembers talking to a young guy who smiled a lot – but that’s it.

Olivia and her team gets to work trying to figure out who was at the party. Carisi and Rollins track down Lawrence at his office, they learn that the only young guy at the party was Lawrence’s grandson Eric.

Rollins questions Eric, he says that he had sex with Sarah but it was “totally consensual.” Eric agrees to go down to the station. Then his father barges in and says he won’t be answering any more questions.
The police get the results back from the hospital and learn that Sarah was on Quaaludes.

Olivia calls Sarah down to her office, she explains to her that they found drugs in her system. Sarah is shocked when she learns that she was on drugs. And, the bad news keeps coming. Sarah had not one, but TWO semen samples in her. She was raped by two men when she was drugged, Eric isn’t the only person that she had sex with.

Olivia is shocked when she learns that the two men that raped Sarah are related, according to the DNA tests. So that means it was either Eric’s father or his grandfather.

Rollins interrupts Lawrence’s board meeting and says that she needs a DNA sample. Lawrence announces that he will save her the trouble, and confesses that he had sex with Sarah the night of the party. Lawrence scoffs that Sarah “came on to him.”

Olivia calls Sarah back down to the police station to see if she has remembered anything else from the night she was raped. Sarah’s memory is coming back – she remembers that she and Eric had sex, and she says that she wanted to. But, she doesn’t remember another man.

Olivia shows Sarah a photo of Lawrence and she starts freaking out – she says there is no way she would have ever slept with him. She doesn’t even remember talking to him or having a drink with him.

Olivia’s team found some Quaaludes in Eric’s room, but she thinks that they may have been planted there by his grandfather.

Sarah wears a wire and agrees to confront Lawrence about them having sex. Lawrence confirms that he drugged her because he wanted her to “relax.” Then, he calls Sarah the wrong name, he thinks her name is Monica.

Lawrence has said enough on the tape for Olivia and her team to arrest him for drugging and raping Sarah.

Barba thinks the case will be a slam dunk, then things get complicated. Lawrence’s daughter Cynthia takes her father to civil court and has him declared mentally incompetent, she says that Lawrence has dementia.

They head to court and Sarah takes the witness stand. Barba plays the tape of Sarah and Lawrence for the jury. But, Lawrence’s dementia claim is going to be tough to beat.
Olivia and her team decide to try and find more victims that Lawrence raped in the past. They think it will make their case stronger.

Barba and Olivia accuse Lawrence’s girlfriend Sue Ann of putting the pills in Eric’s room to save her boyfriend. She reluctantly takes the witness stand and admits that Lawrence has used Quaaludes on her before.

Despite the overwhelming evidence against Lawrence, he seems to be really milking the dementia plea and the jury is buying it. Barba tries to get Eric to testify against his grandfather, but he refuses. However, Eric’s father Larry Jr. is more than happy to take the witness stand and put his father away. Larry takes the stand and testifies that his father Lawrence has a reputation for raping women and that he is faking his dementia.

After court, Larry Jr breaks down and reveals to Eric that when his mom Monica was pregnant with him years ago, his grandfather drugged her and raped her too.

Eric is furious when he learns that his mom was one of Lawrence’s victims. So, the next day he gets on the witness stand in court and tells the jury what really happened the night that Sarah was raped. He confirms that Lawrence raped and drugged Sarah after she had slept with him in his bedroom.

Lawrence stands up and shouts in court that Eric is “soft just like his dad.” Lawrence’s excuse is that he was showing Eric how to “be a real man.” Case closed!