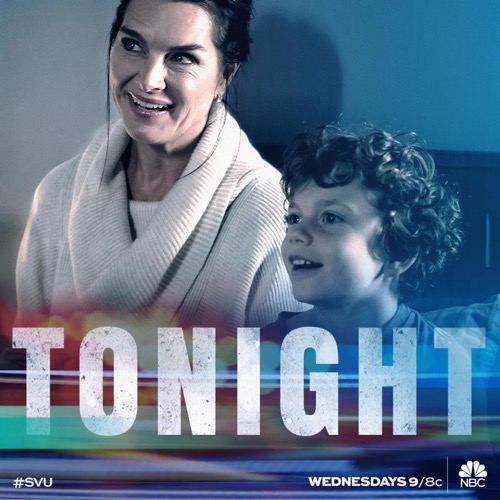 Tonight on NBC Law & Order SVU returns with an all-new Wednesday, November 8, 2017, episode and we have your Law & Order SVU recap below.  On tonight’s Law & Order SVU season 19 episode 6 as per the NBC synopsis, “When a teenaged girl is found dead, Rollins goes undercover at a high-end rehab center where the victim was last seen alive. Meanwhile, Benson tries to overcome her doubts about Sheila.”

The show opens with rock music playing as a teenage girl is shown lying on her bed. Two men break in and kidnap her. Switch to Olivia watching Noah’s grandmother reading him a bedtime story and tucking him into bed. They move to the kitchen and have an awkward small talk. Olivia gets a call to the scene of a crime. The girl who was kidnapped is found dead. It looks like a heroin overdose but she has no ID or cell phone. The ME confirms that the girl was raped and the heroin was laced with fentanyl which is what killed her. Finn meets with the narcotics squad and gets the name of a dealer who is known to the work the area where the girl was found. Rollins,

Rollins, Cressie, and Finn bring him into the station for questioning. He says he never sold drugs to the dead girl but did business with the man she was with, a white guy with a strange mustache. Finn and Cressie find the man with the mustache and ask where he was the night before. He has an alibi but gives the address of the girl. Olivia and Rollins go to the home and ask the parents when the last time they saw their daughter was. They report they haven’t seen her in three months because she is in rehab.

Olivia brings the parents to the morgue to identify the body. It is their daughter Natalie. They say she broke her ankle and was given OxyContin but when the doctor’s cut off the painkillers she moved on to heroin. Cressie and Finn go to the rehab center and interview the director. He says Natalie ran a few days ago. He didn’t call the police because they wouldn’t have done anything and he didn’t call her parents because he thought she would be back. Most of the girls who run return when they realize they have nowhere to go. As they talk a girl starts screaming and they all head toward the noise. The doctor explains that it is Kristi, their newest arrival. She yells at them, not the every sends their kid there.

The director introduces Finn and Cressie to the social worker and asks her to give them whatever they need. She tells them it feels like they are fighting a battle they can’t win. She says Natalie was an incredible artist and she thought she would be one of their success stories. When they ask if she knows of anyone Natalie used with she says she can’t help them due to confidentiality rules. They report back to Olivia who is obviously distracted. Olivia tells them to check subway cameras to see if they can figure out who she got from the rehab center to the area of town where her body was found.
Rollins asks Olivia if she is OK. Olivia says it reminds her of Elle. Rollins gets a call that Natalie was 2 months pregnant and the DNA from the fetus matches the DNA from the rape kite. Natalie had been at the rehab center for 6 months so she got pregnant there.

Natalie’s parents are shocked and say all of the patients there are girls. It had to be a staff member. They give permission for the team to review all of her records. Finn and Cressie return to the rehab center with a warrant for DNA samples of all of the male employees. The director is not happy. He also says Natalie’s file has been moved to an offsite storage area. He does allow them to interview some of the residents. One gives a glowing report and the newest arrival complains but offers nothing concrete.

Olivia and Rollins review the security cameras and see Natalie sneak out. There is no record of any cab or Uber picking up anyone near the facility. Olivia gets a call and goes to meet Sheila, Noah’s grandmother. She gives her a baseball glove. It was Elle’s glove. She was a real tomboy who loved sports. Olivia is touched. She asks if Elle ever said anything about her. Olivia says what happened to Elle isn’t her fault. She doesn’t have to prove she was a good mother. Sheila just wants Noah to know she loves him.

Olivia returns to the station to learn that none of the DNA from the rehab staff matches the DNA from Natalie. Finn learns that a civil suit was filed and settled out of court by the rehab center four years ago. Finn and Cressie go to interview the girl for the suit. She says she can’t talk because she signed a non-disclosure agreement but is happy they are looking into the center. Cressie gets a call that the center is refusing to turn over Natalie’s records. The next scene is in court where the center’s attorney argues that Natalie’s parents signed over their rights to the center when Natalie enter so they don’t have the right to allow the police to review her records. The judge agrees.

Barba tells the team they have to figure out another way in. It is decides that Rollins will go undercover as an assistant to the social worker at the center. On her first day a girl causes a scene in the cafeteria throwing her food. The social worker does a great job calming her down. Rollins is able to access the medical file and downloads the records of the newest patient, Kristi. Rollins show Olivia that the center has already charged over $100,000 to the girl’s insurance company for procedures that have not been done. Rollins knows this because one of them was supposed to have been happening while the girl was having her breakfast with Rollins.

Olivia says they can’t use the information because it was an illegal search but decides to interview the social workers old assistant to see if he knows anything. He tells them that Natalie has actually transferred to a different facility a couple months ago but then returned to the center. He gives them the name and Cressie and Rollins go the other facility. They meet a girl who knew Natalie and she says she fell off the wagon hard. They go to find the counselor at the facility and find him in bed with a patient. They bring him into the station and find that he is the father of Natalie’s baby. He says he never raped anyone. Natalie was begging for sex.

The police call in the director and his lawyer. He admits he runs a lot of tests but says he doesn’t know what happens at the sober living house. Olivia tells him it is obvious what is going on. Ten of the last 12 girls he sent there have returned to him. He gets them clean then sends them there to get back on drugs so they can return to him and line his pockets with cash. She tells him they will prove it in court. He says no jury will ever believe the sluts he works with. Barba says they have nothing to go on.

Rollins realizes that the social worker may be their only hope because she really cares about the girls. Olivia and Rollins go to interview her. She is able to help the team make the connection between the rehab center and the sober living house. Barba decides to charge the director with Racketeering for rape, insurance fraud and drug dealing. The social worker calls Rollins and asks her to come to the center. They find the director on the floor dying from an OD. The social worker says they can arrest her now. Olivia has to go into work and has Sheila babysit Noah.