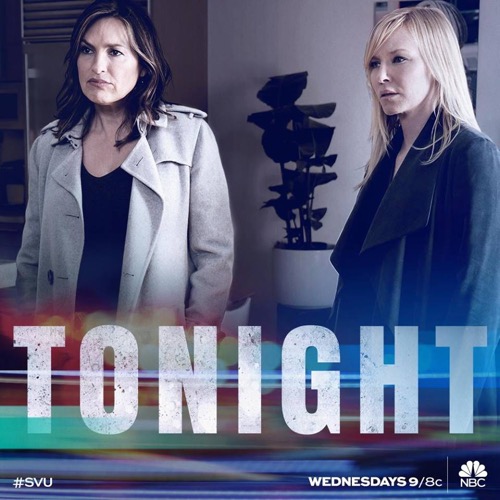 Tonight on NBC Law & Order SVU returns with an all-new Wednesday, December 6, 2017, episode and we have your Law & Order SVU recap below.  On tonight’s Law & Order SVU season 19 episode 8 as per the NBC synopsis, “The cops get tangled in an elaborate online hoax that leads to the rape of a popular social media star. Meanwhile, Benson sets firm ground rules with Sheila.”

The show opens with Sheila walking Noah home from school and meeting Olivia at her door. Olivia invites her to dinner but Sheila declines. Noah says he wishes he had to meet Ellie because Sheila says she loved him so much. Olivia looks unhappy. The next scene is two teenage girls walking into a drug store looking for something called Blue Glacier. A woman stands on a corner and is met by a man and they go back to his house. It is their first date. She posts pictures on her social media account of them together. He is a well-known boxer. He tries to take her to his bedroom but she says she wants to take it slow. He pushes her down and rips her clothes off as she screams NO over and over again.

Katie is seen walking down the street crying and a man asks if she is OK. She cries no and says she was just raped. Fin and Rollins arrive at the hospital to be told the victim is trying to leave. One minute she says she was raped and the next she doesn’t’ know. As they try to talk to her she says she has to leave and that she wasn’t raped. Katie leaves the hospital. Rollins and Fin fill Olivia in on what they know and Cressie researches and finds that Katie Miller is a well know Instagram celebrity. She posted a photo of her and a man’s arm at 9:30 pm the night she reported that she was raped. Olivia and Rollins go to Katie’s home to check on her. She has photos of her with the fighter who raped her framed on her table and she is again asked if she was raped. Katie denies it and asks them to leave.

Fin and Cressie interview the lawyer Katie said she was working with but he says he never heard of her. They think the fighter must be pressuring her to not press charges. Fin and Cressie get a call from Olivia that the fighter, Andy wants to talk to them right away. They head to his gym. Andy shows them a text he received from Katie an hour ago. It says “pay me $10,000 or I will tell the cops you raped me.” He says they had rough sex the night before but he didn’t rape her.

Andy goes to the station and says they met online and texted quite a bit and he was starting to like her. She then sent him a text saying she wanted him to rape her. He shows them the text. Olivia decides that Andy should text Katie back and say he wants to pay her the money. If she shows up she will be arrested for extortion. If she doesn’t show up he will be arrested for rape. Rollins and Cressie watch Andy in the park and see Katie approach Andy. She makes eye contact with Andy and runs away. Cressie catches her and she is brought to the station.

Olivia tells her that demanding money from Andy to not report a crime is extortion. She denies she did anything like that. She was at the park to meet a rep for a modeling job. They don’t believe her but she shows then the texts. She also says Andy has been threatening her since last night and shows them the texts. She admits Andy raped her. Olivia and team think that both Katie and Andy were Catfished. They have IT check out the IP addresses to figure out what exactly is going on. Olivia fills Barba in on the case. To charge the person who sent the texts Andy will have to plead guilty to rape.

Andy is called to Barba’s office and after seeing Katie agrees to a plea agreement. Now they can press charges against the person who set them both up. Cressie tells Olivia IT was able to get an address in West Virginia. Cressie and Rollins head there. Sheila puts Noah to bed and Olivia confronts her about telling Noah about Ellie. She specifically told her she had not told him about his mother. She will when he is old enough to know the truth but he is only five years old. Sheila begs for forgiveness and Olivia gives it. Shelia is very grateful.

Rollins and Cressie find the house where the texts came from and find a young woman. She is arrested and the local Sheriff says he thinks she also goes by Blimpie. Rollins, Cressie and the sheriff go for a drink at the local bar and after a few drinks get into a physical fight with some of the locals. They head back to their hotel and it seems that Cressie wants to kiss Rollins but she backs away. The next morning he goes to meet her and sees the bartender from the night before leave her hotel room. Rollins puts the woman, Heather into their car to head back to New York. She can’t stop talking about how excited she is to go to New York just like Mary Tyler Moore.

Sheila and Olivia make dinner in the kitchen and Sheila tells her about her life. She asks if she can buy Noah a new jacket. Olivia says that would be fine. As they drive back to New York Cressie asks Rollins how she slept. She can tell he is upset but he doesn’t say anything else. Heather asks if she will be able to meet Andy when the get to New York. Back at the station Olivia and Barba tell Heather if she takes the deal she will spend 7 years in prison. She is about to take the deal when the lawyer who was interviewed early enters the room and says he is now representing Heather and she will not be taking a deal.

Rollins asks Cressie if he wants any lunch since she going to get something. He says no and they have another awkward exchange. The case heads to court and Katie testifies that Andy was nice at first then he pushed her down and raped her. She begged him to stop. Andy then takes the stand and says they had been texting for weeks and she told him she had a rape fantasy. He admits he held her down and had sex with her but he thought it was what she wanted. He later found out the texts came from someone else. Rollins testifies that they traced the texts to heather and that she had sent thousands of text to both Katie and Andy in a six week period. She also says Heather confessed when they arrested her. Heather’s lawyer asks Rollins if Heather seemed to idolize Andy. Rollins reports Heather was excited at the idea of meet Andy.

Heather takes the stand and admits she did it and it was just a stupid game. She got the idea from one of the soap operas her mother watched. She tells the court she spends most of her day taking care of her mother. She comes off as very sad and pathetic. The court is adjourned for the day and Barba says it doesn’t look good. Heather had no motive. She was just lonely and stupid. Cressie joins Oliva and Barba and tells them he found a text when Heather asked if she could come along on the date as a friend of Katie’s but she was told no. Barba thinks he may now have a motive. In court the next day he gets her to admit she hated Katie because she had such a great life and Heather is stuck taking care of her mother. She screams it just isn’t fair. Heather is found guilty of rape in the first degree.
Sheila takes Noah to buy a new coat as a strange person is watches. She turns her back for a minute and Noah is gone.