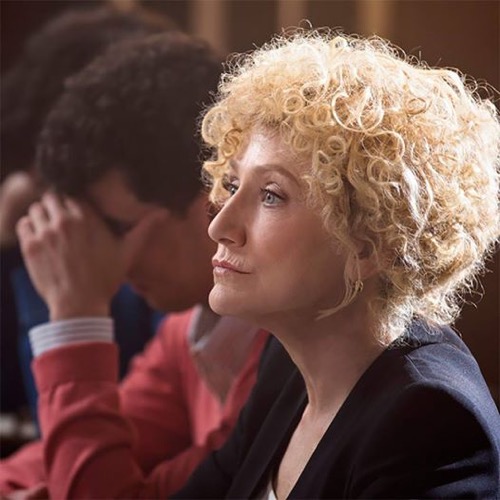 Two unseen men walk by a staircase with shot guns. They open a door and shoot a man and a woman. A call comes into a dispatcher. It is a frantic man who wants to report a shooting.

Two detectives arrive at a house. They talk over what they know. Kitty and Jose Menendez have been shot. Their two sons came home and found them. The detectives look over the scene while the others take pictures and evidence. Jose is slumped over on the couch. Kitty is on the floor. Blood is everywhere. The shooter took the shotgun shells with them.

Lyle, the oldest son, is being questioned. He is home for the weekend from Princeton. Meanwhile, Erik, the younger son, is in the other room with another officer. He is hysterical. He details his night with his brother. Lyle tells the officer that his father is from Cuba. He does what he wants. His mother has always be on edge. In recent times she has been suicidal.
Flash forward to court, Lyle and Erik’s attorney pleads for leniency. The two suffered from an abusive relationship at the hands of their father.

Back to present day, Lyle and Erik show up at home. The place is taped off and full of investigators. They just need to pick up tennis equipment. The detective is surprised that they would want to go to practice, but he doesn’t say much. He tells them to come back in 3 hours. Hey can get their stuff then. The detective goes back in the house to see what they have found. There are guns that have never been fired, pills for Kitty’s depression and money.

The detectives visit Jose’s place of business. They ask a coworker about Kitty and Jose’s relationship. She reveals that the family was building a home in Calabasas. They wanted to move out of Beverly Hills after Erik broke into a neighbor’s house.

After the funeral, the boys get together with their family. Lyle and Erik tell them they plan to move. Weird people have been driving by, lurking around. They think that these people might be associated with Jose.

Ballistics counted 15 shots. Fingerprints are only from the people who live in the house. One detective offers up a gang theory. The other shoots it down. Meanwhile, Erik and Lyle shop for suits for the memorial. Lyle seems thrilled about using their father’s company card to buy what they need. Erik is squeamish and hesitant.

At the memorial, Lyle’s uncle makes a comment about him buying a gold watch 4 days after his father was killed. He explains that he did what his dad would have wanted. Erik and Lyle take the podium at the memorial and share memories of their parents.

Leslie is in her kitchen cooking dinner with her husband. The Menendez murders come on the news. She thinks the boys did it. Her husband looks surprised.

The detectives talk about Lyle and Erik’s account that there was gun smoke in the house when they came home. But the detectives notice there is a window open. They head off to question Erik’s tennis coach. He tells them that Lyle was suspended from Princeton for plagiarism.  When he spoke to the boys the other day they didn’t sound good.

Erik is having a bad dream about his mother. She is in bed crying in the middle of the day. He asks her to get up. They all care about her. The phone rings and wakes him up. It is his cousin Henry. He tells Erik how he found tons of tapes in Jose’s study. It seems the parents where recording all of their sons’ calls. Erik tells him that’s how it was. They hang up. Henry calls Erik’s psychiatrist Jerry. Henry is worried about him.

The detectives visit Craig, a former classmate of Erik’s. The two wrote a script together about a boy who kills his parents. They want to see the script. Craig agrees to get it. The detectives read through the script back at the precinct. They pull the phone records that make the boys suspects.

They call in the boys’ aunt. She recounts how the boys didn’t care about money. They told their aunt they were cut out of their father’s will. They call the boys’ uncle who is in charge of the estate. He found a will on Jose’s computer. But it has since been deleted. The detectives track down the computer tech, who helped the boys’ uncle retrieve the file. They were paid by Lyle. The detectives call in the tech. He tells them that he was asked to delete files by Lyle.

Erik returns home with his uncle and grandmother. He is hesitant to go in. His uncle had everything cleaned and replaced. He heads to the living room and looks over everything. He begins to cry and hunkers down in a corner of the room. His uncle finds him and asks him what is wrong.