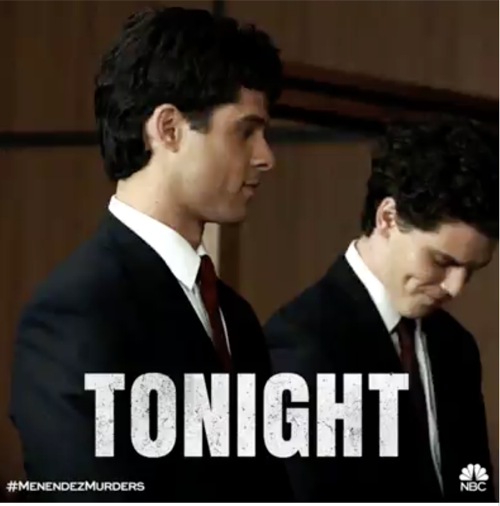 Lyle and Erik dress in their cells for court. They enter the court. Leslie tells them to focus on her. The judge asks them to stand. She tells them that they have been convicted of the murder of their parents. They are dismissed. Leslie talks outside of the court room to the press. She tells the press that there is a bias against them because they are rich.

Lyle and Erik meet with Leslie and a consultant. They discuss Erik’s psychiatrist. They are sure that what he told him shrink will be privileged unless he threatened him.

Judith calls Jerry. She is wired with the detectives in the room. Jerry doesn’t know. Judith hangs up and tells the detectives where to find the guns. The authorities head out to do a search.

Leslie and her team go over the boys’ financial records. They discuss Erik’s shrink, Jerry. He was convicted on assault years back. Leslie admits to her team that Erik confessed to her. She can’t imagine the pain of what happened in the house to provoke such violence.

Leslie and her consultant Jill meet with Jerry, who says that Lyle threatened him. He also states that Judith stole his notes when she stayed with his family. Leslie tells Jerry that she thinks he is lying and milked the family for sessions that never occurred. She wished him luck and leaves.

Lyle meets with his girlfriend Jamie. They talk through glass. He is missing his hair piece. His girlfriend gives him a card. He likes it. He asks her to lie and say his dad made a pass at her. She doesn’t understand why he wants her to lie. He begs her. Do it for them.

The detectives visit a gun shop. They ask for footage but the gun shop doesn’t have the footage, their camera doesn’t work. It is only used as a deterrent.  They find out who bought the guns, Lyle’s old roommate. They call him. He tells them he lost his license after Lyle kicked him out of his dorm room.

Lyle speaks with Jill and thanks her for the hair glue. Leslie talks to Erik in another room. She tries to get information about his parents from him. Erik tells her that he was afraid all of the time. She wants to know what he is scared of.

Leslie and Jill bring a psychiatrist by the name of Bill in. Leslie urges them to talk to Bill. They agree. Lyle talks about the high standards of their father, his dominating nature. Erik talks about his parents being atheists. Erik asks Bill if they drug the food in prison. His stomach is upset.

Bill tells Leslie that the boys are a lot sicker than he expected. Erik is fragile and all over the place. She tells Bill to push him a bit. It will save him from the death penalty in the end.

Judith meets with the detectives and discusses Jerry with them. She says Jerry controlled her with hypnosis. Meanwhile, Erik and Lyle are taken out of their cells so that ABC News can come in and film. The boys’ friends, Glenn and Donovan, start giving interviews. Leslie tries to control it but she can’t.

Jerry takes the stand. Leslie accuses him of mistreating his patience and breaking his oath by telling Judith everything. He denies it.

The next day in court the judge rules that Dr. Jerry’s tapes are no longer privileged and can be used in the case. Leslie is angry and wants to appeal.

Erik is in his cell having bad dreams. He is recalling a night when his father told him he wasn’t worthy of being a Menendez. The next day, Erik tells Bill that he thinks he is going crazy. He sees his father’s face. He can hear him. He talks about his nightmares about a man with the green face. He starts crying. His mother knew about his nightmares. She would put him in the shower, but he wasn’t allowed to say what he was afraid of. He says he needs to stop talking.

Bill brings the tapes of his sessions to Leslie and her team. Erik admits to sexual abuse.  His father repeatedly raped him. Leslie believes it, but the other women don’t. They aren’t so sure about all of this.