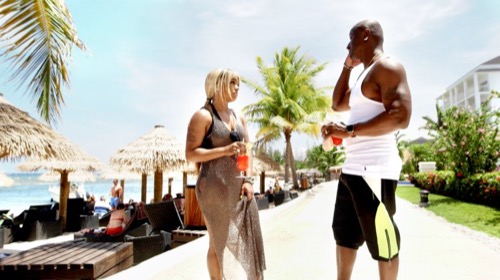 Previously on Love and Hip Hop Atlanta Rasheeda got another shock in the drama involving her husband Kirk, Jasmine and baby Kannon as a young man came into her store Press and claimed to be Jasmine’s ex boyfriend and a possible father to her baby.

Karlie tried to embarass Joc at her store’s grand opening by ambushing him with her new man. Jessica Dime brought her new relationship with an NBA player to the forefront and both Jessica and Karlie managed to make peace with Joseline.

Meanwhile Joseline has had her baby Bonnie Bella and she and Stevie are trying to co parent. All of the ladies, except Joseline of course, headed for Jamaica for a ladies getaway to forget about the drama. While they were there some unwanted,, and unexpected guests showed up to crash the party.

On this week’s episode Karlie is very upset that Joc has come to Jamaica and brought Treasure with him. He says “Treasure is really here to make Karlie go crazy. She introduced Ceaser to me so I had to let her know that I was moving on as well.” Joc tells the ladies “I just came to support my guys.” Karlie says “What guys?”

Just then Waka walks out on stage and does a short performance. Tammy says “I love what you did, but this is a girls trip and you can’t just pop up on a girls trip.” Waka says “I just wanted to surprise you.” Tammy says “I don’t just pop up on your trips.” Waka says “It’s not like you can’t.” Kirk is also there. Rasheeda is not having it. She says “It’s time to go. I don’t want to see you.” Kirk tries to talk to her, but she is not having it.

Joseline is content raising Bonnie Bella. She is happy that Stevie is being a good father and being an active part of her life. She says “I’m just wondering if we should raise this baby together. I have been thinking since Stevie asked me to move into the house and raise Bonnie together. I think I might do it because everything we do is for her.”

The next day in Jamaica, Rasheeda is still not happy that Kirk is there. She decides to meet with Kirk and talk. She tells him “Someone named Logan came into Press and told me that Jasmine’s baby could be his. He told me that the baby could be his.” Kirk says “I will definitely get a lawyer and get a DNA test.” Rasheeda says “Let me know how it goes.” Kirk says “Of course i will you’re my friend. As of my now you’re my wife.” Rasheeda says “We are seperated and this is Jamaica and I am going to have fun.”

Jasmine is working at the club. When she comes out Logan is waiting for her. He confronts her about the fact that Kannon could be his and Jasmine tells him “Get away from me.” Logan says “You have to talk to me sometime. Talk to me now or not at all. Don’t come calling my phone later on.” Jasmine slams the door on him.

The group in Jamaica is preparing for a white party. They are sitting around talking. Karlie and Tommie are still upset that Treasure is there.

Treasure reveals another story about a woman named Kiana who was dealing with Kirk from another strip club. Rasheeda says “I had heard this girl’s name before, but I always thought it was foolishness. How dare Treasure come up here talking about my personal business.” As the conversation continues Rasheeda gets angry and says “This is where i make my exit.” Karlie says “No, you’re not going anywhere.” As she is guiding Rasheeda back to her seat Tommie springs up and snatches Treasure out of her chair.

The fight continues and they have to be seperated by security. Joc apologizes for Treasure’s mouth. Dime and the rest of the group are royally pissed. Joc leaves with Treasure and the whole group calls him a traitor.

Back in Atlanta Jasmine is still dealing with her issues with Logan. She tells Rod about the issues with Logan popping back up. Rod says “There is no way that Logan can be the father? You haven’t been with him for years right?” Jasmine says “Absolutely not.”

Rod continues to believe her. They want to know why Kirk hasn’t been served with the papers yet. Jasmine says “They can’t find him. He moved his family out of the building. He isn’t at the other house. He is in hiding.” Rod says “It’s mighty convienent that all of these people are coming out of the wood work. First they tried to get Joc to say that he was possibly Kannon’s father, now there is this guy Logan. When i see him I am going to mess him up because Kannon is involved and this is nothing to play with.”

Joseline meets up with Lovely Mimi to introduce her to Bonnie Bella. Joseline tells her “I was planning on moving to Miami, but now that Stevie and I are working things out he has asked me to move into the house with him. I want my daughter to have two parents because I didn’t. As long as Stevie can handle one little requirement that I have then we can work this out.” Mimi then tries to talk to Joseline about her relationship with Tommie. Joseline doesn’t want to hear it. She tells her “I like you. Watch how you move in Atlanta and who you deal with.”

Back in Jamaica Joc goes to talk to Treasure about the incident at the white party. Treasure is pissed because Joc tells her “You were wrong for opening your mouth at the party.” Treasure goes off and tells him “You’re friends are fake. All they do is talk about each other on social media and behind each other’s back. I wasn’t trying to hurt anyone’s feeings. I was just trying to be real.” Joc tells her “You had no business opening your mouth about that subject.” Treasure is pissed! She fires back and tells Joc “Just leave. I’m going home. I don’t want to talk about this anymore. Go back to your fake friends!”

After the incident with Treasure the group heads out on a cruise. Jessica says “Yesterday when Treasure came at you like that it made me mad.” Rasheeda says “Me moving aside cleared the way for you and you came through.” Waka comes through with a great surprise for Jessica. He brings Shawn out to the boat. The whole group is having a great time. Later that night the whole group is sitting around in a private piano room listening to Tammy’s new song.

Everyone is impressed by her music. Rasheeda says “To see Tammy and Waka together like that is inspiring. In a perfect world that would be me and Kirk, but right now I just don’t know.” Each couple goes around the room talking about how long they have been together.

When it comes to Jessica and Shawn he pulls out his grandmother’s ring, and gets down on one knee. When he proposes everyone is shocked and excited. Jessica says yes! Then she asks “So are we like engaged?” She says “Never in a million years did I think I would come on this girls trip and get engaged!” Joc says “This is the most romantic trip of my life!” He tells Karlie “I just want to apologize for whatever we had going on. I just want to lay it to rest.” Everyone cheers and is excited for new chapters to begin.