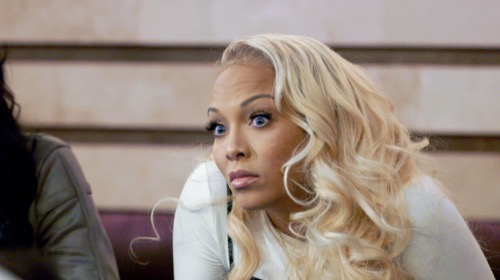 This week on the season finale of Love and Hip Hop New York Kimbella meets with Samantha’s mother Kim to talk about the fallout from little Mendecees birthday party. Kimbella tells her “Everytime Samantha and Erika do something it keeps the kids apart.” Kim responds “There are two sides to every story. You don’t know both sides.” Kimbella asks her “What’s the other side?” Kim tells her “Erika and Samantha have invited Yandy to things that she has not come to.” Kimbella says “Can we all get-together and sort all of this out so that the kids can be together?” Kim agrees.

Drewski and Sky are having problems. Sky has moved out of Drewski’s house and back in with her mom. Drewski meets up with Sky to try and patch things up at the basketball court, but when he arrives she is flirting with another man. Drewski gets very upset. He tells her “I want to make things right with you and this is what you do?” Sky is still hurt by the fact that Drewski posted the video online and has decided to set him up by using her friend to make him jealous.

Swift stops by the studio where Cardi B is working and professes his feelings for her. He brings her flowers and tells her “My feelings have grown for you and I really think that we could do great things.” Cardi is flattered, but she tells him “I don’t want us to get together because if you do me wrong I would wish you bad, and I pray for your come up.” Swift says “Why do you think I would do you bad?” Cardi says “I just worry about jumping from one relationship to another.”

Remy and Pap are focusing on helping their children get their rap careers off the ground after the loss of their baby. Pap tells them “I brought an independent music producer in to listen to your music and tell you what she thinks.” The producer is from Hot 97, a radio station in New York. The rep tells them “I think your music is hot. I want you to come perform on the Hot 97 stage.” The kids are excited.

Yandy and Kimbella meet up at Kimbella’s photo shoot to talk about the meeting. Kimbella says “Did you hear about the birthday party?” Yandy says “I was coming to the party with Judy and the kids when I heard all of this commotion so I turned around and left.” Kimbella laughs and says “I was the commotion!” Yandy is shocked when she hears this. Kimbella goes on to tell her about the confrontation between her, Ericka, Samantha and Kim. She then tells her “I met with Kim the next day and we agreed that there needs to be a meeting with all of us so that we can work this out.” Yandy agrees to go to the meeting although she is not happy about it.

Drewski is trying to make things up to Sky. He shows up at her mother’s house and apologizes to her once again for the incident at the basketball court and for video taping her in their home. Sky tells him “I accept your apology, but I am still sleeping here at my mom’s house.” Drewski pulls out his phone and sends out a text. Before Sky can go inside a beautiful white Mercedes rolls up. Skye is shocked and happy. Drewski tells her “Before you plant yourself in that drivers seat you need to tell me that you are going to change your cell phone number.” Skye is shocked to hear this. She asks him “Why do I have to change my number?” Drewski tells her “I’m jealous and I don’t like the way dudes come at you.” Skye gets angry and throws her glass of wine in his face. She tells him “I thought you didn’t want me riding a motorcycle in the winter. You buying me this car is just you trying to control me.” She storms away.

The meeting between Erika, Samantha, Yandy, Kimbella, Kim and Judy starts out all well and good. Everyone is trying to agree on how to work on get the children together, but it quickly disintegrates when Kimbella speaks up and blames Mendecees for all of the trouble that is going on between all of the women. She tells them “If all of you know that he is a cheater and wasn’t faithful to any of you then why are you sitting here fighting over him?” Samantha speaks up and says “It’s not about Mendecees, it’s about the kids.” Yandy appears shocked at Kimbella’s brazen display and Judy tells Kimbella “Don’t blame my son for any of this.” The argument continues to escalate until Judy leaves.