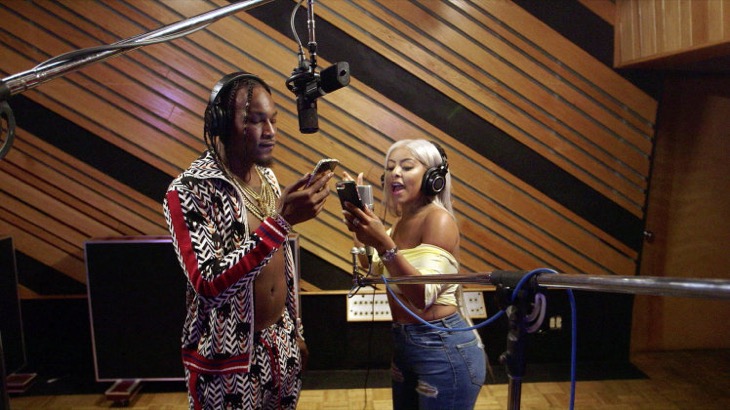 This week on Love and Hip Hop Hollywood Moniece is out with Fizz, AD and Kannon. They are playing miniature golf. Moniece tells Fizz “I talked to Teairra and she wanted to apologize for kicking you out of the meeting that day.” Fizz says that it’s ok. AD asks Moniece to come be part of the photo shoot for her new line. Moniece says “I would love to be there.” Then AD drops another bombshell on her and says “I also want to invite Tiffany.” Moniece is not happy to hear this. She tells her girlfriend “I’m not happy about this, but I’ll sleep on it and if I get a good nights sleep maybe when I wake up the Gods will be smiling on you and I’ll be ok with this.”

Hazel’s mom Angela has come into town and she is eager to introduce her to her new boyfriend Denzel. Angela asks him “What do you do for my daughter?” He tells her “I made your daughter.” Angela quickly fires back “You didn’t make her.” Denzel says “ I do everything for her including making sure she gets up for work on time.” He then excuses himself from the table.

Angela is clearly not impressed by her daughters choice in men. She asks Hazel “Where do you see yourself in this relationship in five years? Because this is not a relationship, it’s quicksand.” Hazel tells her mom “If I dated someone on my level then I would have  to cater to them.” Angela asks her “What about that young man Booby that you mentioned to me?”

Keyshia is preparing to go on a blind date that was arranged by her friends Zell and Quita. Booby comes over to babysit for their son. He has a million questions for his ex wife. He asks her “Are you going to cover up?” Keyshia asks him “Are you my father?” Booby laughs and Keyshia goes off to get ready for her date,

Lyrica and Brooke are hanging out and Lyrica rehashes the incident between Zell and Misster Ray. The two ladies then move on to talk about Hazel. Brooke says “I don’t know Hazel, but she seems a little shady.” Lyrica says “You have to tell me what’s going on between you and Booby.” Brooke tells her “Marcus and I were arguing and then when he left Booby and I kissed.” Lyrica is super excited for her friend. Brooke says “Lyrica you can’t tell A1.” Lyrica says  “Girl I won’t tell him anything.”

Moniece decides to go to AD’s photo shoot to support her and try to mend fences with Tiffany. At the shoot Moniece tells Tiffany “For the sake of AD I apologize, but I also feel like I am owed an apology.” Tiffany says “No.” AD steps in and tells her friend “You did say some nasty things about her and you should apologize,” Things deteriorate even further and once again the ladies have to be separated by security before they come to blows.

Marcus meets up with A1 and Marcus to discuss Bridget’s career, but neither one is really keen on backstabbing Ray,, Meanwhile  Hazel is hanging out with Chanel and making a plan to try and steal Booby from Brooke. The ladies spot Marcus and A1. When they introduce Chanel to Marcus he reminds her that they had met before and that she had dissed him. A1 then tells her that he won’t work with her. The encounter goes downhill from there as Chanel lets Marcus know about Brooke and Booby being at Lyrica’s listening party. It makes Marcus angry that some unknown girl would be in his business that way and then Hazel continues to tell them “I’m a best selling author in LA.” The guys aren’t buying it and after a few more minutes of trading insults Hazel and Chanel storm off.

Keyshia and Quisha are on their way to meet Keiysha’s blind date. His name is Dujuann. Keiysha is not impressed and after only a few minutes the two ladies decided ti call it a night.

Marcus decides to meet with Bridget ans they discuss the possibility of working together. Bridget tells him “James told me that you were single and about the whole situation. Brooke is my friend, but my loyalty is to you.” Marcus tells her “Well if we are going to work together I don’t want her to know anything about it.” Bridget agrees with that. He says “Ok let’s talk less about Brooke and more about this music.”
T

here  is still major tension between Moniece and AD. Moniece tells her girlfriend “Tiffany said that you weren’t happy here.” AD says “I didn’t say that,h but we do have some things we need to talk about.” Moniece says “It sounds like to me that you don’t want to be here.” AD tries to explain herself. She tells Moniece “Within a year of being together we were in therapy.” Moniece says “We are clearly not going to resolve this today.”

The night of Booby’s listening party arrives and Hazel and Chanel show up. Brooke is still having conflicting feelings about Marcus. Despite her conflicted feelings Brooke is not happy to see Hazel and Chanel at all.  When Booby’s performance is over he comes offstage to talk to Brooke when Hazel and Chanel saunter over to get his attention.  Hazel tells Brooke “You always frontin like you don’t know me, but you do know me.” All of a sudden the fight is on!

A1 says “We gotta stay clear of the drinks because  I don’t want any drinks thrown on me.” Bridget steps up and tries to defend Brooke. She tells Hazel “The only reason that Brooke and I became friends with Brooke was because of Marcus.” The ladies continue arguing until security breaks them up.

Brooke decides not to go to Catalina with Booby in order to go to Marcus’ mother’s birthday party. So Booby decides to take Bridget to Catalina instead. At the party Marcus tells Brooke “I’m not sure what I expect from you these days.” Brooke says “Ditto.” Brooke asks him “Do you want a relationship?” Marcus says “I’m in love with you.” Marcus asks her “What happened between you and Booby?” Brooke tells him “I wanted to piss you off. We kissed.” Marcus asked her “What else?” Brooke tells him “That is between me and Booby.” Marcus responds “I’m a man. I know I did my wrongs, but for us to work there has to be complete honesty.” Brooke tells him “Booby invited me to go to Catalina this weekend.” Marcus looks a little shocked. He asks “You didn’t go?” She tells him “No. I’m still in love with you.” The two decide to work on their relationship and Marcus invites her to his listening party.

Bridget and Booby are having a great time in Catalina. After her fight with James some time away seems to be exactly what Bridget needed. She tells Booby “I’m here as me and you’re here as you. Nothing else matters.”

Safaree and his cousin Renaldo are talking. Renaldo wants Safaree to come back to Brooklyn. Safaree is torn because he does miss his family, but he loves living in Hollywood. Renaldo tells him “Everyone really missed you. The girls out here are crazy.” Safaree says “I’m gonna take heed of your words.”

Zell goes to Hazel with the idea to do a diss track about Masika. Hazel is all for it but she wants to add Mister Ray to the track as well. The two are super excited and get to work on it imeadiately, but they have some trouble getting the timing down. It takes a few tries, but in the end they come up with a pretty funny track.

Safaree and Chanel are hosting a party. Safaree asks Fizz about the possible B2K reunion. Fizz says “It’s not looking good, but I’m working on it. I’m going to talk to April next week to see about Omarion.” Chanel is excited about the possibility of the reunion. While they are talking Hazel walks in. She has decided to confront Safaree about the bet he made with the others about working with her. Safaree tells her “I was just there to support Ray.” Hazel tells him “You need to put some respect on my name because this is my city.” Even Chanel is upset when she hears about the bet and tells Safaree he needs to apologize.

Brooke meets up with Booby to discuss their relationship, Brooke tells him “Us going to Catalina would have been the start of something. We both know where it would’ve lead. I need to cut you off.” Booby is not happy hearing this, but he respects her decision. The two share one last kiss.