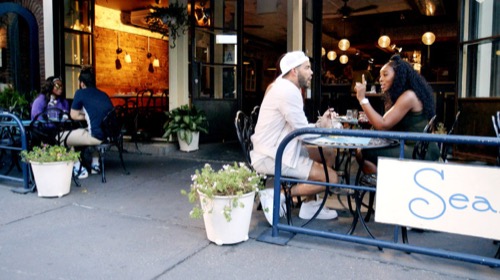 Tonight on VH1’s hit series Love & Hip Hop returns with an all-new Monday, November 13, 2017, episode and we have your Love & Hip Hop recap below for you.  On tonight’s season 8 episode 4, “Reckless,” as per the VH1 synopsis, “Yandy discovers a juicy secret of Judy’s that helps her come up with a plan to get back at her.”

This week on Love and Hip Hop New York Yandy is stressed dealing with the situation with Mendecees and Judy. He hasn’t called her in five days and when he does she asks “Why haven’t you called me in five days?” He tells her “I needed a time out.” Yandy asks him “What do you mean?” Mendecees says “My mom is telling me all this stuff and I don’t like it.” The conversation continues and Mendecees expresses his displeasure at Yandy putting lotion on another man. Yandy apologizes and Mendeces promises to handle his mother.

Snoop, Lil Mo and JuJu meet up to discuss the rumors about Mo’s husband Karl cheating on her. Snoop doesn’t believe the rumors. She tells Mo “I don’t believe it, but I do understand you being upset about the rumors.” Mo says “I’m going to investigate this and get to the bottom of it.”

James and Mariah meet up to try and smooth things over. Mariah is still upset over Sofia being in his video. She tells him “I showed up to support you at your video and this chick was all over you. What’s worse is that she thought that we weren’t together.” James jumps in and tries to defend himself. He tells Mariah “I didn’t tell her that.” Mariah isn’t hearing that at all. She tells him “You got me out here looking foolish, putting my hands on people and looking like a liability. I’m not having any of that. Feed the birds Lames R!” She storms off as James yells at her “Remember that night!”

Yandy is in a much better place after talking to Mendecees. She meets up with Jonathon and Bella to plan her next move with Judy. She tells them “I have been doing my own research and Judy has been seeing some young thing all over Facebook and Instagram. I am going to catch her with this man.” Jonathon tells them “Speaking of drama I see Anais. She’s creating all kind of drama and spreading all kinds of rumors.” Jonathon is angry. He says “If I’m going down I’m taking her with me because I know her dark secrets too.” Yandy says “I’m going to try and arrange a sit down with the two of you.” Jonathon says he is ok with it, but he doesn’t hold out much hope.

Jaque takes Sofia to meet Brit. The two ladies are good friends, Sofia is worried about telling her man about the incident between her and Mariah Lynn. She tells Brit “Mariah busted in on the video shoot and started yelling at James and started yelling at me. It turned into huge drama. I’m worried about telling Jaquae about doing the video shoot, but I’m more worried about him hearing it from someone else.” Brit tells her “You should definitely tell him.” Sofia agrees.

Lil Mo finds her husband Karl outside working out. She asks him “Where’s your ring?” He tells her “I’m working out.” Mo is not satisfied with that answer. She tells him “If someone sees you out here and they don’t know you they could assume you’re single.” Karl is surprised by Mo’s being so upset. He wants to know what’s wrong. She tells him “Our son saw rumors on the internet about you cheating on me.” Karl tries to laugh it off, He tells her “Those are just rumors. You always see stuff like that.” Mo asks him “Would you be open to taking a lie detector test?” Karl seems offended. He asks “What’s a relationship without trust?” Mo says “It’s nothing.” After a few minutes, Karl agrees to take the test.

Judy is on a date with a man named Rob. All of a sudden Yandy walks in and surprises Judy. Yandy tells him “How do you spend time with her and she is married?” Rob seems shocked to hear this. Judy tells Yandy “He knows that Kenny is my ex.” Yandy is surprised to hear this. She decides to sit down and join the date. Rob tells Yandy “We came here to eat so I need to come around here and feed my baby.” He then steps around the table and feeds Judy. Yandy looks appalled.

Bri is worrying about making her grandmother proud of her. Her grandma is sick and Bri wants to make sure that she is taken care of. She is worried because she has to go back to the hospital.

Anais agrees to meet with Jonathon. When she gets there Jonathon tells her “We are talking about us. When I came back to New York, every time I walk into a club, I have people telling me that you are saying that I’m Hollywood.” Anais denies the accusation. He tells her “Last year for my birthday you were there. How could you sit there and tell the whole right side of the table that I was involved in an orgy?” Anais gets really angry and starts screaming at Jonathon. Anais says “I do not deal with someone who is being a hypocrite.” Jonathon wants to know “How am I being a hypocrite?” Anais says “You’ve done some stupid stuff.” Jonathon says goodbye to Brie and storms out.

Grafh meets up with Dj Self, Jaquae and a few other people to hang out. Grafh tells them about the fight between Mariah and Sofia at James’ video shoot and how James felt that Sofia was giving off vibes. Jacquae is upset. Grafh tells him “You need to check your girl and find out what is really going on because these two chicks were fighting over a man and that man wasn’t you.” Jacquae agrees that he needs to deal with Sofia about this. It looks like Sofia’s worst fears have been realized.

Dream Doll and Bri meet up. Bri tells Dream “My grandmother is back in the hospital. My other friends are coming through. Sofia.” When Dream hears Sofia’s name she tells her “You shouldn’t trust her.” It turns out that Sofia is Safaree’s ex. As soon as Sofia sits down Dream starts in on her. Sofia has no idea what her problem is, but all of a sudden Sofia and Dream Doll are throwing blows and being separated by security. Bri is so upset because she didn’t get the support she desperately needed from the two women she thought she could count on. She tells them “I’m out of here.” Dream Doll tries to apologize but Bri isn’t hearing it.