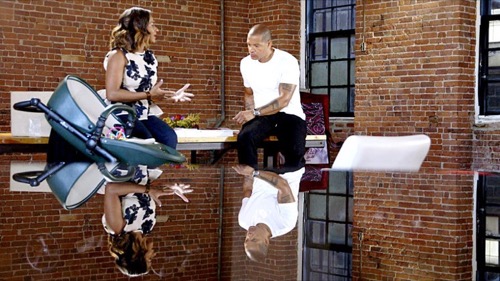 On this week’s episode of Love and Hip Hop New York thev fight continues between Yandy, Samantha, Erika and Judy. Samantha tells Yandy “Nobody wants your man. We had him before you. We can’t trust you.” Yandy says “Trust me with what?” Samantha asks her “Are you and Mendecees married or not?” Yandy tell her “We’re married.” Samantha tells Erika “I don’t know what you want to do, but I am done with this.” Yandy mentions little Mendecees birthday party. Samantha tells her “You are not planning my sons birthday party.” Yandy says “Well you come up with a plan and he’ll pay for it.” Samantha likes the sound of that much better. Judy says “I’m glad you guys are able to work out your differences because I just want to be part of all my grandchildren’s lives.”

Peter and Amina welcome their new baby into the world. Peter says “Even though this is the last baby it feels like the first one and I am so excited.”

Papoose and Remy are out for a romantic lunch and Remy has her own surprise for Pap. She asks him “Do you love me?” He tells her “Of course I do.” She asks “How much?” He tells her “To the moon and back.” Then she gives him the large box that she walked into the restaurant with. When he opens it there is a positive pregnancy test. Pap is beyond words excited.

Kimbella and Yandy meet up. It seems like there is a problem with Julez and Kimbella and the fact that there is a confidentiality that has to be respected. Yandy tells her “You have to respect that there are some things that I won’t be able to tell you when it comes to our business.” Kimbella is not happy to hear what Yandy has to say.

Peter Self and Rich meet up. They all congratulate Peter on the new baby. Self asks Peter “What’s the situation between you and Amina?” Peter says “She took the kids and moved to LA, so I am gonna try and work it out with Tara.” Rich asks him “Are you sure that the only reason you are trying to work it out with Tara is because Amina has moved to LA?” Peter says “No, I have done alot of soul-searching and Tara is the woman I am in love with. She is the woman I want to be with.”

Peter meets up with Tara and their son Gunner at the Art Factory. Peter tells her “It’s over between Amina and I and I wanted to see if we could have another chance.” Tara tells him “I’m tired of being the girl in the messed up relationship. There is no trust. You just had a baby!” Peter tells her “I love you. I know that I’ve hurt you, but I want my Goddess back.” Tara tells him “For 11.95 you can have her.”

Cardi is having a tough time dealing with her breakup with Tommy. Swift comes to one of her events and the two of them sit down and have a conversation. He tells her “Anytime you need to talk about the situation with you and Tommy I’m here.” This makes Cardi happy. She tells him “I’ve missed having you on the tour to talk to and joke around with. By the way we are having a family dinner this weekend and you know my family loves you. Are you gonna come?” Swift thinks about it for a second and then agrees to come. Cardi is overjoyed.

Yandy and JuJu meet up at the gym to talk about all of the things that have been happening. Yandy tells her about the incident between her, Samantha and Erika. She then goes on to tell JuJu about the situation with Kimbella. JuJu tells Yandy “I was planning a trip to Mexico,” Yandy is super excited. She asks “It’s just you and me right?” Juju says “No. I was planning on inviting the girls including Kimbella. That won’t be a problem will it?” Yandy says “No. As long as she gets over this one thing.”

Peter goes all out in trying to win Tara back. He starts by throwing her a surprise fortieth birthday party. Tara is very impressed. She says “This is something I wished Peter would always do. This is the peter I would like to rebuild a friendship with.” At the party Peter makes a very moving speech talking about how much he loves Tara and what a wonderful person she is.

Jules meets up with Yandy. She tells him “Kim wants to be involved in your career.” Jules is confused. He says “She is involved in my career.” Yandy tells him “You haven’t given me the product.” Jules tells her “I’ll give you the product when you tell me how those checks are going to be rolling in, and as for Kim don’t worry about her. I’ll talk to her.”

Everyone is having a great time at Cardi’s family dinner. Heennessy corners Swift and asks him “You like my sister right?” Swift is a bit taken aback by the directness of the question, but he tells her “Yeah I do.” Hennessy tells him “Well she’s finally single. You need to go ahead and make your move before you lose it.”Remy is having an

Remy is having an eptopic pregnancy and that she can’t get pregnant anymore.ectopiche and Pap are absolutely devastated. Pap tries to comfort herand tells her “I’m worried about you. In the future we’ll figure out another way.” Remy does not want to hear that. She is completely distraught.