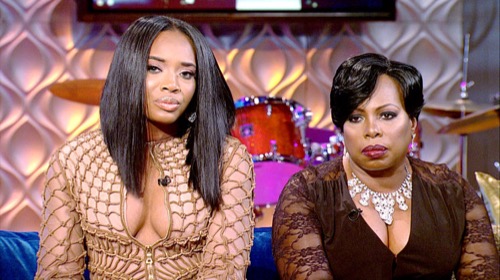 On part one of the Love and Hip Hop New York reunion Nina begins the reunion by congratulating Remy Ma on her Grammy nomination. Then she moves on to talk about Cardi, Swift and Asia. Asia is backstage. Nina asks Cardi “Why do you think that Asia has beef with you?” Cardi says “She is just ma because I have a big butt and he wants that. I have beef in the hood, but I know why I have beef. I have no idea why this girl is mad at me.” Cardi’s sister Hennessy speaks up and says “I wanted Swift and Cardi to be together because he is my bro and I love him.”

Nina brings Asia out and asks her “Why did you have a problem with Cardi?” Asia says “I didn’t have a problem with Cardi.” Cardi jumps up and interrupts. She asks Asia “Why were you talking mad trash about me in those text messages?” Asia says “I supported Swift when he started working with you until you started acting funny.” All of a sudden Cardi gets up and hits Asia in the head. Nina says “Everybody in their seats and let’s talk like adults.”

Nina asks Asia again “What was it that caused you to send those text messages to Swift?” Asia says “Swift disrespected me.” Cardi is still pretty angry and says “You didn’t like me before all of that. Why didn’t you like me?” Asia says “I went through Swift’s Facebook and I found you. I stalked you.” Swift says that he is not with either Cardi or Asia and apologizes to Asia for what happened with Cardi.

Nina moves on to talk to the Creep Squad. Nina asks Cisco “What is the problem with you and the other guys?” Cisco says “I don’t know what Rich’s problem is. He seems to have issues with me. I have tried to get Peter to sit down and resolve it.” Peter says “I shouldn’t have to keep sitting down with two grown men and trying to resolve issues.” Nina moves on and asks them “Who started the Creep Squad?” This question sparks a huge argument between Cisco and Rich. Cisco tells Rich “Sit down and be quiet. You don’t want none of this.” Rich quickly jumps up and Cisco quickly crosses the stage. The two men have to be separated by security.

Once things are settled down and the two men are back in their seats Nina talks to Mariah Lynn who seems to be the main source of contention between Rich and Cisco. Mariah talks about the situation between herself, Cisco and Self. She says “Cisco felt betrayed by the situation so he said some hurtful things about me which he apologized for. Our mother’s both have brain aneurysms so we connected on that level.” Cisco agreed and apologized to Mariah again for saying that he put food in her refrigerator. He also apologized to Peter for taking away the ten grand from the appearance in New Orleans. He then gives Peter a check for ten grand to make up for it. The two men hug and make up.

When they return Nina addresses the issues between Snoop and J. Nina asks J “Why did it bother you so much that she got Sofie Green an audition and not you?” J says “I just felt disrespected. All of this foolishness was just ridiculous.” Snoop cuts in and asks J “Did you cheat on me?” J explodes and asks “Cheat on you with who?” She then turns around and asks Snoop “Did you cheat on me?” Snoop tells her “No I didn’t.” Nina breaks in and asks Snoop if there is a chance that the two of them could get back together. Snoop says “No. There is too much chaos there.” J breaks down and starts to cry. She says “I love her. That doesn’t just go away, but I feel like I deserve respect and all of this was just messy.” Snoop then says “I will always love J as a friend and be there for her.”

When they return Nina moves on to deal with the devastating loss that Remy and Pap suffered when they lost their baby. Remy says “I don’t think that people understand how quickly you get attached to a child.” Pap says “I’m ok. I don’t have time to not be ok. I have to make sure that my wife is ok.” Remy says “He spends all of his time making sure that I’m ok, but I know that he’s not ok.” Juju and J are crying on stage. J tells Remy “I know what you are going through. I have had this happen to me. I just want to come up on stage and give you a hug right now.” Pap says “Any doctor who performs the procedure she needs please reach out to us. Nina tells them “We know that you guys are going to make it because of the love that you have for each other and your family.”

When they return they deal with Mendecees family of baby mommas. Nina tries to get the timeline together as far as how long Ericka and Mendecees were together. Yandy says “I don’t care what happened before me.” As they are trying to get things straightened it quickly desintigrates. Judy and Kim quickly engage in a heated exchange of words. Nina quickly gets things settled down and lets everyone know that she has spoken with Mendecees.

When the phone interview is played Mendecees reveals that Ericka was no more than a side chick while he was dating Samantha and on a break with Yandy. When Ericka hears this she is very upset. She says “As a man with a daughter, mother and sister I think it is very shameful of him to sit up here and talk like that.” When Nina asks Yandy what she thinks of the story she responds “That was always the story I got from him. If you know you have to leave his house by a certain time and can’t be around his friends and family then that’s your position. You need to play your position. As they are talking things quickly break down and all of the ladies have to be escorted off stage and locked into their dressing rooms to cool down because they are so heated.