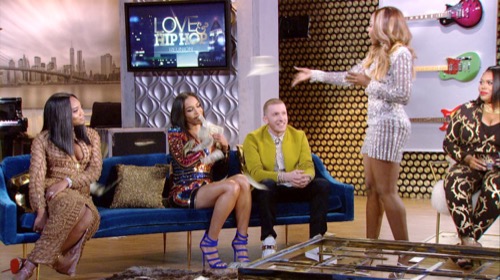 This week on part two of the Love and Hip Hop New York Reunion the fight between Yandy, Samantha, Ericka, Kim and Judy becomes so intense that all of the women have to be removed from the stage and locked in their dressing rooms. When the filming resumes it is just Yandy, Samantha, and Ericka on stage. Nina asks Yandy “What’s going through your head right now?” Yandy says “I”m just sad because the kids don’t get to see each other.” Neither Ericka nor Samantha believe her and Ericka says “The two people who attacked me were your relatives.”

Nina then moves on to address the situation at the birthday party. She asks Yandy “Did you know that Kimbella was going to show up and create a disturbance?” Yandy says “No. I didn’t.” Nina then plays an audio clip of a phone call between Yandy, Judy and Kimbella during which it sounded like Yandy not only knew that Kimbella was there, but had sent her there to give Yandy an excuse to not come to the party. After the clip plays Nina asks Yandy “Can you see how that would look suspicious?” Yandy doesn’t seem to have a real answer for her question. Once again the accusations start to fly and the yelling ensues. Nina tells them “I hope that you guys can work things out for the children.”

When they return they are talking to Bianca, Drewski and Sky. Nina asks Bianca “Do you think it is appropriate to play with a relationship?” Bianca responds “I am a petty person so it doesn’t matter to me.” Nina then asks Sky “Do you think he lead her on?” Sky says “I think they led each other on.” Bianca fires off on Sky and tells her “I heard that you get passed around.”

Nina asks Pap “Would you ever work with someone that Remy says “I don’t care because if you can steal him then he wasn’t really mine.” Nina then reveals that they have a clip for Drewski’s video Make It Official. After showing the clip and seeing Drewski talking to Sky’s dad about making it official Drewski surprises Sky and drops to one knee and pulls out a ring. He tells her “I know you’re a down woman and after all we have been through I just wanted to know if we could make it official?” Sky is shocked, surprised and happy and she says “Yes!”

While Self is trying to answer the question Cardi interrupts and says “I connected him to Major.” Major Galore rolled her eyes at Cardi. Cardi looks at her and says “What? do you have a problem with me?’ Major tells her “You know we were face to face at a club and you didn’t do anything.” All of a sudden Hennessy flies across the stage and attacks Major. Security quickly steps in to seperate the women. After Cardi and Hennessy leave the stage Self reveals that he and Cisco will be working together on the Gwinnin record label and Mariah says that she and Major are cool.

They then move on to talk about Kimbella’s situation this season. Nina asks Julez “Why do you think Kimbella has such an issue with you in the studio?” Julez says “You’ll have to ask her. She has to trust me.” Kimbella says “He does a great job of calming my fears. I trust him completely. I just can’t trust these other girls out here.” Nina then moves on to talk about their trip to Mexico. Cardi is back on stage. Yandy addresss the drama between her and Juju about her book. Nina asks Juju “Did you borrow from Yandy’s life for your book?”

Juju says “I would never use my friends for my book like that.” Yandy steps up and says “I felt a certain type of way when I read it and I called her out, but she explained it and I understood once she cleared it up because I know my friend is not like that.”

When they return Nina talks to Peter, Tara and Amina. Nina asks Amina “How did it feel to hear Peter to ask you for a divorce and that he wants to work things out with Tara?” Amina says “It hurts, especially because that’s not what he says off camera.” Nina then asks Amina “Are you and Peter still intimant?” Amina says “Yes.” Peter says “No.” Nina asks Tara “Are you and Peter still sleeping together?” Tara says “No, this has been going for years and it needs to stop.” Cardi speaks up and tells them ” Stop letting Peter be in control of this situation. He jumps from woman to woman because he can.”

Cisco then tells Amina “You sleep with Peter knowing that he is only with you because Tara doesn’t want him.” Amina fires back and says “I sleep with Peter because I want to.” Nina then moves on to address the subject of Amina’s new book. She asks Tara “Do you have any issues with the book?” Tara says “I do.” She then talks about the fact that Amina wrote about them going to a sex party the night before they got married and then Peter coming home to her. Tara says “I want my children to see their father in the best light possible.” Peter says “They are going to see this when they grow up so they are going to know who their dad is and how he behaved.”

When they return everyone has a final word. Rich and Cisco have a final confrontation. Cisco tells Rich “I’m gonna beat you down whenever I see you.” Remy tries to keep things calm. Cardi apologizes to Asia for her behavior earlier in the reunion when she attacked her. She says “I remember what it was like when people used to come for me like that so I just wanted to apologize to her for that.”