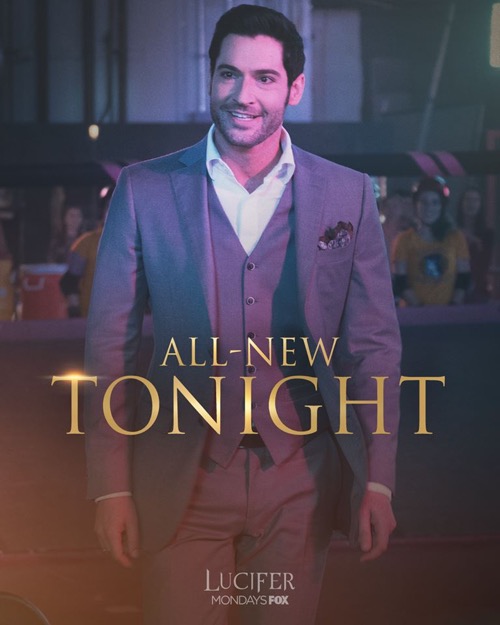 Tonight on FOX their drama Lucifer airs with an all-new Monday, December 11, season 3 episode 10 called, “The Sin Bin,” and we have your weekly Lucifer recap below. On tonight’s Lucifer episode as per the FOX synopsis, “With the Sinnerman in custody, Lucifer is prepared to go to any length to get his devil face back. Meanwhile, Trixie is introduced to Charlotte and questions the relationship she has with her father. The Season 3 fall finale.”

Lucifer is drinking at the club with Maz in celebration of them catching the man who kidnapped him. The next morning, the Pierce announces that there is a prisoner in the house. They have Sinnerman and he wants everyone on their toes. Chloe tells Ella she cannot believe how calm Pierce is with the SInnerman there, so close. He is the guy who killed his brother after all. Ella didn’t know.

The officers bring the Sinnerman into a room, shackled at the ankles and wrists. Lucifer shows up. He wants to talk to Sinnerman. Pierce doesn’t think this is a good idea. Chloe enters the room while the two debate. Chloe tries to ask him a few questions but he isn’t budging. Ella comes into the room. The Sinnerman’s phone is ringing. They miss the call. All of them look at the phone as a text comes in. Sinnerman laughs. It is a video of a woman tied down at the reservoir. Pierce wants details. Sinnerman tells them he will take them there.

The team reviews the video to try and get clues. Sinnerman obviously has an accomplice. Pierce doesn’t want to let Sinnerman out. He thinks this is Sinnerman’s escape plan. Ella discovers who the women are and also finds out that Maggie Cole likes to roller derby in her spare time. Lucifer and Chloe head over to where Cole skates. She is known as The Slayer. When one of the skaters sees them asking around she tries to run for it. Lucifer throws beer in her way so she falls. They put her into the penalty box to question her. The only thing she and Maggie fought about recently is a job.

Lucifer and Chloe catch a lead on where they can find Maggie’s car. They find the hot pink hot rod in a parking lot. When they get close, Chloe discovers it has a bomb strapped to it. They run and jump, getting out of the way just in time.

Meanwhile, Dan and his daughter are at a café as he tries to find a babysitter for her. He didn’t realize she had the day off from school. Charlotte is there in line. Dan introduces his daughter to her. Trixie thinks she is pretty.

Chloe and Lucifer search Pierce’s office for a key to the holding cell while Ella tries to keep Pierce busy with stories about the death of her dog when she was younger.

Dan comes back to the precinct and finds a gift on his desk from the Sinnerman. He yells for someone to call the bomb squad. Lucifer and Chloe bring the SInnerman into a precinct truck to take him to find Maggie. They get him into the back when they realize their driver is Pierce. There was no way he was going to take his eyes off of them.

They head into the woods. After walking for a bit, Chloe hears screaming. They find Maggie tied down in the reservoir. Chloe and Pierce race to pull her out. When they turn back around they realize the SInnerman and Lucifer are gone.

Pierce and Chloe call 911. In the back of the ambulance, Maggie confesses to going to the Sinnerman for a favor.

Lucifer has Sinnerman tied up at his house in the hills. He wants answers. Sinnerman tells him that he isn’t saying a word. Lucifer tells him he will get what he wants. The Sinnerman makes jokes about how Lucifer to return to his normal self. Lucifer brings in Maz. She can’t get anywhere with him. Lucifer decides he is going to kill him then.

The team tries to figure out where Lucifer went with the SInnerman. Dan has a listing of all of Lucifer’s properties. He did some research when Lucifer and Chloe teamed up.

Maz tells Lucifer she isn’t going to help kill Sinnerman. She will be at the Chateau. She’ll know the deed is done when she sees the swarms of locust.

Lucifer tries to kill Sinnerman but he cannot seem to do it. He goes through all the ways he should try. The Sinnerman begins to tell him that he needs Lucifer to kill him. Just as Lucifer discovers that the Sinnerman needs to be killed by him, Pierce comes in and shoots SInnerman. Lucifer screams no. Now he won’t know why the Sinnerman wanted to die by his hand.

Lucifer tries to explain himself to Chloe but she isn’t having it. She walks away from him before he can finish telling her what he learned.

Dan comes to Charlotte’s to pick up Trixie. The two decide to go out on a date.

Lucifer goes through the evidence at the precinct to try and find more on Sinnerman. He discovers something. He calls Pierce to meet him at the club. He accuses Pierce of being an accomplice to the Sinnerman. He also accuses him of being immortal. He stabs Pierce in the chest. He falls to the floor. After several minutes, Pierce gets back up!