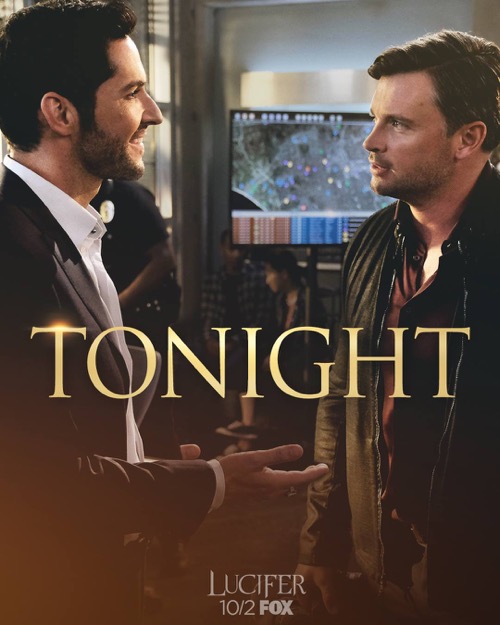 Tonight on FOX their drama Lucifer airs with an all new Monday, October 2, season 3 episode 1 called, “They’re Back, Aren’t They?,” and we have your weekly Lucifer recap below. On tonight’s Lucifer episode as per the FOX synopsis, “After Lucifer (Tom Ellis) wakes up in the middle of the desert with his wings back, he recruits the help of Chloe (Lauren German) to help figure out what happened to him and why. They come across a crime scene that could be tied to Lucifer’s kidnapping.”

An armored vehicle is driving down a desert road. He sees something in the distance. He approaches and sees a man with white wings in the middle of the road. It’s Lucifer! He gets into the truck and demands a ride to LA. The two have met before. The driver is a jewelry thief on the run. They talk. They plan to help each other. The police surround them. Lucifer gets out to see guns raised. They demand him to get down on the ground. He tells them he is a consultant for the police. Just call Chloe Decker.

Back at home, Lucifer welcomes Linda. He is sweet to her. She wants to know what he wants. He shows her his wings. She is shock. She didn’t know they could grow back. Lucifer tells her he plans to cut them off again. He needs her medical expertise. She tells him she didn’t learn how to take wings off in school. She tells him to think this through.

Lucifer shows up at the station. He tracks down Chloe. He tells her they need to find out who kidnapped him but he doesn’t have a description. He brings her to the scene of the crime, the dessert. She doesn’t see anything. She turns moments later to see an arm sticking out of the sand. She believes a crime took place now. Lucifer looks taken aback.

Forensics and Chloe identify the body as a local hotel owner. They head back to the precinct to meet the new lieutenant. He makes a brief announcement and everyone gets back to work. Amenadiel shows up to see Lucifer. Lucifer tells him about mom. Amenadiel is upset she is gone, he didn’t know. Amenadiel is also upset he didn’t get his wings back yet. Lucifer doesn’t share that he has his. Lopez comes in. They have a suspect. Lucifer and Chloe head to the hotel to check out the suspect.

They see the suspect. He hits on Chloe. Lucifer threatens him. The suspect laughs. Chloe shows him her cuffs. He laughs again before running off and yelling back to her that she needs to catch him. When they do catch him, Lucifer throws him over a rail and luckily into a swimming pool down below.

They bring Josh the suspect in and show him pics of Steve, the dead hotel manager. Josh gets serious. He wouldn’t kill Steve. The two of them pull pranks on one another. He thought that Lucifer and Chloe’s arrival was all a joke.
Amenadiel shows up at Lucifer’s. He isn’t there though! Remedy, a massage therapist is and she wants to rub him. Amenadiel goes to get a towel and finds Lucifer’s wings.

Lucifer doesn’t know who kidnapped him, he explains to Chloe. But he does need to show her something. He just wants to be honest with her. He takes a set and tries hard to make his wings appear. His face contorts and he makes noises. Chloe asks him if he is gassy. When he doesn’t do anything, she gets annoyed and leaves the room.

Chloe and Lucifer meet with the lieutenant. They come up with a plan for the kidnapper. They are going to use Dan as bait.

Chloe, Dan and Lucifer get into the surveillance truck and go. Chloe wires him up. Meanwhile, Amenadiel asks Lopez where Lucifer is. She tells him he is in the middle of the sting.

Dan doesn’t end up the bait, but Lucifer instead. The kidnappers bring him to an abandoned building. They are amateurs; they fight over who changed the batteries in the flashlight. Lucifer turns the tables and ties them down to a chair, one sitting on top of the other! Lucifer questions them about Steve, the hotel manager who turned up dead.

Chloe and Lopez go over the evidence again. Meanwhile, Lucifer busts down the door of Sam. He asks him if his father hired him. Sam begs for mercy. He works for a practical jokes company who kidnaps people for fun. Chloe shows up with Dan. They take the man in.

Chloe reports to the lieutenant. She tells him that even though her and Lucifer have an untraditional partnership, they get the job done.

Lucifer comes home to see Amenadiel, who is mad that Lucifer didn’t tell him about his wings. Amenadiel tells him that maybe father has forgiven him. Lucifer doesn’t want to be forgiven. Lucifer tells him about a man named the Sinner Man, that is who kidnapped him. He thought their father was behind it, but he isn’t. This is something much darker.