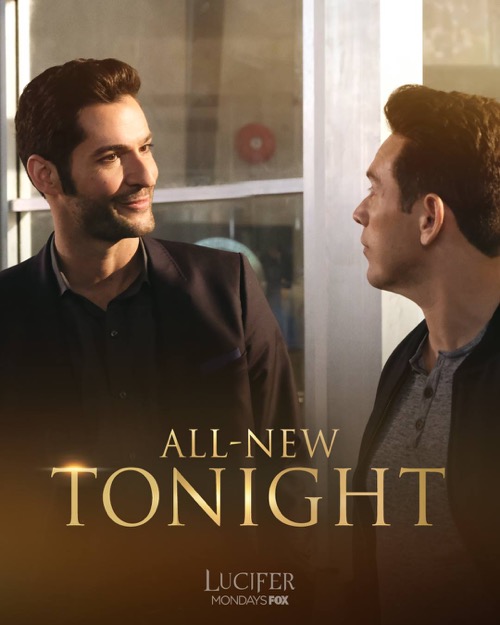 Tonight on FOX their drama Lucifer airs with an all-new Monday, November 13, season 3 episode 7 called, “Off the Record,” and we have your weekly Lucifer recap below. On tonight’s Lucifer episode as per the FOX synopsis, “A reporter seeks revenge after he discovers that Lucifer has been sleeping with his estranged wife. However, when it’s revealed that Linda is the reporter’s estranged wife, things get messy. Lucifer’s reputation and safety are on the line, especially when a serial killer from the past resurfaces.”

A patient gets a second chance at life when he comes to in the hospital. He leaves, grabbing flowers on his way home. He hears laughing on the other side of the door. He hides behind some bushes. Lucifer comes out. He follows Lucifer to a club where Lucifer laughs and drinks with a group of women. Lucifer comes up to him. He knows he has been following him. He wants to know what he wants. The man tells him he is after the man who slept with his sweet, smart wife, not disclosing to Lucifer that he is talking about him. Lucifer tells him he needs to destroy the man. The guy agrees. Chloe arrives. Lucifer tells the man who he is and how he is a consultant with the LA PD. He has to go.

The man goes to work the next day. He pitches a new story to his editor, a piece on a man who says he is Lucifer and works for the police. She gives him the green light. He heads to the precinct to see Lucifer.  He tells him he is going to write a piece about him. The reporter starts interviewing all the employees. Everyone loves Lucifer, except Dan who gives the reporter all the details of Lucifer’s work with his ex-wife.

The reporter demands a ride along with Chloe. They head to a crime scene. A woman with breast implants has been discovered. The murder took the implants out and left her for dead. Lucifer gets some digs in on Dan, who is irritated. Reese the reporter thinks she was killed in this way because the murder wanted to call her out for being a fraud.

At the precinct, Chloe sees patterns with two other murderers. Reese wants to know why Lucifer works with Chloe. She doesn’t have much of an answer. That night, Reese follows Lucifer to a warehouse where he hands a man a bag and then takes another. Mazikeen comes out of nowhere. She warns him to stay away from Lucifer.

Reese’s estranged wife visits him the next day. It’s Linda! Linda asks him why he keeps calling her. They have been over for 2 years. He needs to sign the divorce papers. He asks for 24 hours, she agrees.

Reese breaks into the penthouse. He finds a woman tied up in lingerie. He tells her he will save her. Lucifer comes in. He wants to know why the man is in his house. Reese tells him he is going to expose him. Lucifer laughs.

At the precinct, Reese watches Lucifer talk to the murder suspect. Reese has an epiphany about how Lucifer gets people, to tell the truth. Chloe comes by to talk to Reese outside the room. When she leaves, Lucifer goes crazy on the suspect in the room, exposing his true devil face. Reese sees him.

Reese goes to see Linda. He tells her that Lucifer is the devil. She laughs. She tells him to sign the papers and move on. He signs them and leaves. Reese begins building a timeline in his office and digs for evidence everywhere.

Chloe and Lucifer visit Reese. They need help in the case from last year. Lucifer asks him if he took care of the guy he was looking for all that time ago. Reese tells him no. Lucifer takes off to see Linda for therapy. Reese shows up, plowing through the door. He warns Linda and then shoots Lucifer. Lucifer is mad that Reese ruined his shirt. Linda tells him she knows who Lucifer is. He cannot believe that she still associates with him.

Reese spent so much time on Lucifer he ruined his career. He knows his vulnerability, though – its Chloe. Reese tracks down the murder suspect that Chloe was following. They pair up and spike Lucifer’s drink at the bar. A woman drinks it and drops dead instantly. During the crime scene investigation, Chloe tells Reese she thinks the killer is after him.

Later, at the penthouse, Reese comes in with a knife. They talk back and forth. Lucifer asks Reese what he wants. He drops the knife. He wants Linda to love him.

Reese goes to see Linda. Reese becomes angry, hitting Linda in the head by accident. He pleads with her. He runs off to his office where he takes a drink. The murder suspect he befriended poisoned his drink. He drops to the ground. Lucifer comes to his side. The suspect runs for it.