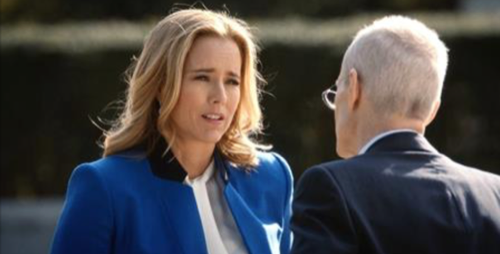 Tonight on CBS Madam Secretary airs with an all new Sunday, May 21, 2017, season 3 episode 23 Finale called, “Article 5” and we have your Madam Secretary recap below. On tonight’s Madam Secretary episode, as per the CBS synopsis, “Elizabeth (Teas Leoni) heads to Brussels to seek NATO’s support against Russia when it threatens to invade Bulgaria, but when France refuses to cooperate, it could threaten the alliance’s very existence. Also, Henry’s (Tim Daly) new government role has him dive into the Russia issue and turn to his former operative, Dmitri Petrov (Chris Petrovski) for help.”

Elizabeth offers Henry support as he gets ready for his job interview with the CIA. Jason and Allison tell their parents there is no way they want to go camping this weekend. Elizabeth reminds them of all the fun they used to have but no one is interested. Nadine and Michael have breakfast together and she asks him to keep their relationship quiet especially at work. Nadine and Daisy talk about the brewing problem with Russia. Jay updates the team that a Russian ship is moving into the Black Sea and they are worried Russia is preparing to attack a NATO ally.

Russell asks to meeting with Elizabeth. He wants her to join the team in Brussels. The president wants her to bring up article 5 in the meeting: an attack against one NATO nation will be considered an attack against all. She has to get it through to them that a war will be imminent if they attack. Nadine meets with the mother of a soldier whose body was accidentally buried on Russia soil. She promises they will do everything they can to get his body back to the US. The mother reports she has been trying for a year and doesn’t hold out much hope that Nadine and Elizabeth will be able to help.

Henry gets the job with the CIA and tells Elizabeth he hopes her trip to Brussels goes well. Article 5 has only been invoked once before in the history of NATO. Henry and Elizabeth decide to go camping without the kids. Elizabeth argues with France over invoking article 5 and France decides to withdraw from the Alliance. Michael and Elizabeth meet and he shares information he has that she can use to try to get France back in the fold. It is basically blackmail and Elizabeth isn’t sure if it is the best move. Henry and his team review the Russia situation and he thinks he may know why the Russians are being so aggressive.

Nadine and Daisy have lunch and discuss Nadine’s romance with Michael. They snoop in his social media account and discover a photo of him with another woman three months ago. Nadine says they are not exclusive but it obviously bothers her. Elizabeth calls the president of France and presents the negative information she has about his son in hopes that France will join her. He becomes angry, refuses and hangs up on Elizabeth.

Jay reports to Elizabeth that Belgium and Turkey are hesitant to commit troop deployment if France isn’t on board with the plan. Henry meets with a former Belgium agent he knows and asks for his help in figuring out what is happen with Russia. He agrees to help. Elizabeth meets with the president and learns that Russia is about to invade Bulgaria. The president orders US troops be sent immediately. If NATO won’t act the US will go it alone. Elizabeth returns home and tells Henry she is scared. If NATO goes away what will the future hold?

The next morning Nadine tells Elizabeth she found out that the woman in the photo with Michael is part of an alliance that is trying to take down NATO and the EU. Michael has been on her payroll for over a year. Elizabeth worries he is trying to sabotage her and the president. They have to get to the bottom of it STAT. Henry’s friend reviews the paperwork Henry has and points out that there is a name missing on his list. Henry and his team investigate the man for clues.

The mother who is waiting for her son’s body to be returns go on TV bad mouth the president and his plan to defend Bulgaria. She plans to go on all the news shows. The PR is hurting the president and he asks Elizabeth to speak to her to beg that she stop her campaign. She agrees to temporally to stop. Elizabeth meets with Michael and lets him know she knows about her work with the anti-NATO group.He promises he isn’t trying to betray her and that he quit months ago.

He promises he isn’t trying to betray her and that he quit months ago.

Henry finds evidence that the president of France accepted bribes from Russia to help him getting elected with the goal to break NATO and help Russia invade several of its’ neighbors. Nadine confronts Michael and he can’t believe what she thought of him. The president of France is forced to resign but his replacement is also not in favor of moving forward with troops in Bulgaria. Elizabeth reports to NATO that the Russian troops have invaded Bulgaria and the Bulgarian government will fall without NATO’s help immediately.

Elizabeth reads a postcard from her uncle who died in war. He knew he was on the right side of history. She says it is time that NATO do the same. The vote is called to invoke article 5. With France abstaining, the votes passes. The body of the soldier is returned from Russia. Elizabeth and Henry go camping and celebrate that while they didn’t save the world they made it OK for now. As they enter the cabin they find the kids and Elizabeth is thrilled to get to spend the weekend with them.THE END