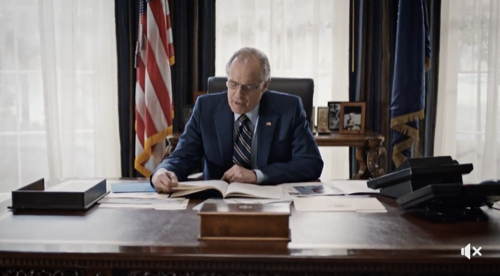 Tonight on CBS Madam Secretary airs with an all-new Sunday, November 26, 2017, season 4 episode 8 called, “The Fourth Estate” and we have your Madam Secretary recap below. On tonight’s Madam Secretary episode, as per the CBS synopsis, “Secretary of State McCord and her staff work with the Mexican government to extradite a Mexican cartel leader to a U.S. prison in an effort to diminish the opioid crisis. But after he escapes during transport and a journalist who secured a gloating interview with him while on the lam is murdered, Elizabeth’s urgency to find the leader escalates.”

Liz wakes up to find Henry working on the Great Eight. He hasn’t found anything yet. Liz has been having nightmares about Russia. She gets called in to see POTUS.

Liz arrives outside of the Oval Office. Russell explains to her that Harrison (the president’s son) is back in rehab and since the CDC Report came out this morning things have been busy. She enters to see the president. He is upset about the drug crisis and what is happening on his watch. He wants the head of a Mexican drug cartel, Macias, who is running things from his prison cell, brought to the US and put into supermax. Liz asks him if his son’s latest spiral is clouding his judgment. He says it is not and is adamant Liz deal with this problem.

Blake briefs Liz on the day. He is not himself. He explains that his parents are flying in to see him. They are private sector people who don’t approve of his job. Liz tells him to be his parents in so that they can see what he does.

Liz video chats with the secretary of Mexico. He shuts Liz down immediately at her request to extradite Macias to the US. They make a deal to loosen their trade provisions and let them in on US cyber weapons.

Liz meets with a reporter who calls her on the US’ decision to barter with Mexico for Macias. She tries to maneuver around his questions, but she can’t. They go off the record. She tells him that the US will never beat the cartel not as long as Mexican officials are on the cartel’s payroll. But what can they do? Mexico is their neighbor and ally.

Macias is being transported to the US. A helicopter is heard overhead. The chopper fires at the authorities, blowing up the leading car. The prison bus stops. Cars surround them. Macias gets out. His people have come to free him.

POTUS speaks with the Mexican president. He assures him that they will help try and track Macias down.

Henry and his team come up with a strategy to out the possible Congressperson who could be leaking Intel to Russia.

Stephanie and Dmitri meet up for drinks. He is a little hesitant because of Henry. Stephanie assures him it is okay. They sit and drink. Meanwhile, the reporter Liz met with about the war on drugs is on the brink of reporting a story that could ‘really change things,’ he tells her. On his way outside, he is grabbed from behind by an unknown man who slits his throat.

Stephanie and Dmitri walk home from their date. She wants to go out again but he isn’t too sure.

Liz gets word that the reporter she spoke with has been killed. She visits his editor who turns over the reporter’s notes and files. Kat and Jay go through the files. The reporter has a lead on who in the Mexican government is on Macias’ payroll. Liz tells them to keep digging. Jay gets a text that they know Macias’ whereabouts.

Russell and Liz meet with the president. He wants to perform a raid to get Macias and not inform the Mexican government of the raid. Russell and Liz do not think this is a good idea. It will affect their relations with Mexico. POTUS doesn’t care. He wants to move in on Macias asap.

Senator Morejon barges into Henry’s office. He wants to know why he is being followed. Henry cannot give him information and asks him to leave. The senator is furious, telling him he is going to report him. The CIA is not allowed to spy on American citizens.

Liz sits down with Blake. She asks him how his visit with his parents went. In a nutshell, he tells her that his parents want him to be a political consultant and not work for the state. She isn’t surprised, which surprises him. She tells him he is too smart to do this for the rest of his life. She plans to fire him in a year. He is taken aback. She wants him to decide what he wants to do within the next year and she will either help him get his dream job or at the every least write him a glowing reference. He agrees.

Kat and Jay tell Liz they have found their man, it is Mexico’s Secretary of Foreign Affairs. He is on Macias’ payroll. Liz is dumbfounded.

Liz heads to see POTUS to stop the raid. They can get the Secretary of Foreign Affairs and Macias in the long run. POTUS aborts the raid. Russell is happy.

Mexican officials break down the office door of the Secretary of Foreign Affairs. They haul him in.

Liz, Russell and the president meet with the president of Mexico. He thanks them for the Intel. After the meeting, the president asks Liz to stay so they can talk. He explains that he is sorry he was so gruff and hard-headed to deal with. He hates that thousands will die before they can get a real hold on the drug crisis.

Dmitri meets with Stephanie for dinner in a busy restaurant. He is late. She is smiling and happy to see him.