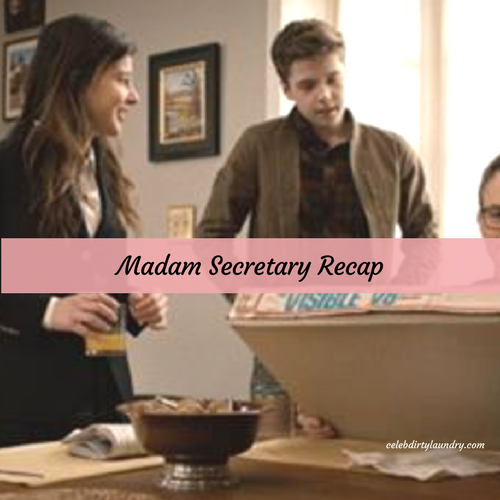 Tonight on CBS Madam Secretary airs with an all new Sunday, March 26, 2017, season 3 episode 17 called, “Swept Away” and we have your Madam Secretary recap below. On tonight’s Madam Secretary episode, as per the CBS synopsis, “A possible mole is arrested in the CIA arms smuggling ring, but Elizabeth (Tea Leoni) suspects that he could be a small part of a larger, more dangerous force behind the operation.”

The phone rings waking up Elizabeth and she rushes into the white office to get an update on the smuggling ring. Elizabeth convinces the president not to shot down a plane that is carrying weapons because if they do they will lose their last chance to find the mole. The president agrees with her. Henry gets word that the cult is getting ready to attack.

Elizabeth and her team meet and discuss the poaching of black rhinos in Namibia. She asks them to find a new approach to dealing with the poaching problems. Henry meets with his informant and is told the group is getting ready to use their bomb. The mole within the CIA is caught. He is a forensic accountant and Elizabeth interviews him using a much softer approach since the CIA’s techniques failed. He starts to open up to her but his attorney shows up before she can learn anything. His lawyer is a well-known mafia attorney. Elizabeth can’t figure out the connection.

Jim Fox comes to Elizabeth’s home and offers a plea bargain. He said she can’t afford the public scrutiny of a mole in the state department. She refuses and tells him to get out.

She then meets with the Attorney General and tells him they should take the deal. She thinks they can get information they can use now. A trial will take years. She thinks there are bigger fish out there. The team makes a presentation to the president of Vietnam but he won’t go for the public ad campaign. Meanwhile at the current rate of decline the black rhino will be extinction in 3-6 months. They have to do something fast. Elizabeth is at a loss.

Milken, the CIA mole, takes the plea deal and is released from jail. Before he can give the CIA any information he is assassinated. The drug test confirms that Henry’s informant, Ian has been compromised. He plans to pull him out the next day.

Elizabeth goes to the president and asks that he help her with the rhino problem. He agrees but Russell is very mad because she went over his head. Henry goes to meet Ian but he doesn’t show up. Instead someone opens fire but Henry is able to get away. He is shot in the ankle and breaks his leg. While Elizabeth talks to him in the hospital they realize the cult and the CIA smuggling ring are working together. The president is briefed and the nation is put on high alert.

Elizabeth meets with Jim Fox and tells him he is responsible for the death of Milken. He refuses to help her. Elizabeth and her team are thrilled when they get the money to fund the Vietnam program.

Jim Fox comes to Elizabeth’s home again and this time he wants to work with Elizabeth.