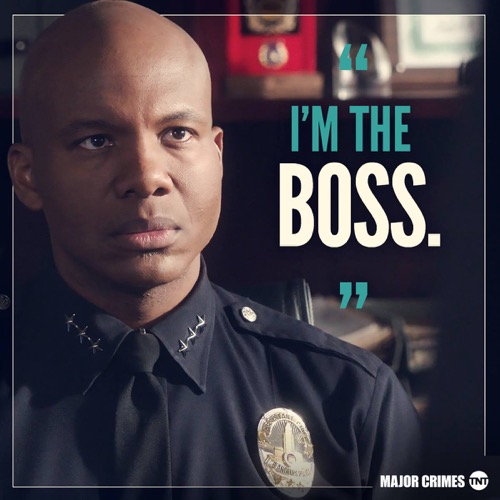 TNT Major Crimes airs tonight with an all-new Monday, November 21, 2017, episode and we have your Major Crimes recap below!  On tonight’s Major Crimes season 6 episode 4 episode as per the TNT synopsis, “Sanctuary City: Part 4.” as per the TNT synopsis, “AsPart 4 of 5. While dealing with a difficult personal matter, Sharon continues to investigate the disappearance of the St. Joseph’s Three, their relationship with an overly protective priest and the possibility that two of the teens could be killers.”

The show opens with Sharon laying on the floor unconscious. She begins to regain consciousness as the paramedics arrive. She is taken by ambulance to the hospital. Louis yells at the two FBI agents and throws their box on the floor as he demands they leave the office. The captain puts Louis in charge as he asks the FBI agents to come to his office. The team realizes they can only get their information on the television so they watch several different news stories about the boys being found. The bishop says in a news conference that while the boys were found in Mexico Father Jonas is in a different part of the country, far from where the boys where located.

Louis complains to the captain about the FBI’s conduct and reminds him that they could have been hurt when the raided Marvin’s hate group headquarters. The captain explains the boys are going to be released to them rather than the boy’s parents. The FBI will also share all their notes from the interviews with the boys. Louis arrives at the hospital and gets an update from Rusty. He reports that several tests have been run but no results are back yet. Sharon is alert and talking to Louis and her husband. Louis updates her on the case as the doctor arrives. He asks to speak to her alone but everyone tries to argue they should be allowed to stay. Sharon asks them all to leave.

The doctor tells Sharon while what he has to say will be initially upsetting, they have caught it early and there are good treatments available. The next scene is of the boys being lead into the interview room at the station. Miguel tells the police that everything was Lucas’ idea. He told them he had the greatest surprise ever and they would find out the morning of the field trip. During the field trip, Lucas said it is time to go and they went outside. A big black limo was waiting and they got inside. As the limo left the museum a man in a mask turned around from the front of the limo and sprayed some kind of chemical on the boys and they passed out.

They tried to get out of the limo but the doors were locked. They woke up in a strange dark place and waiting until sunrise to try to escape. They were in the middle of the desert. They started walking until they found a house. The people called the police and that was when they realized they were in Mexico. When they police came they searched their bags and found the drugs. Both boys say they had never seen the drugs before. Louis doesn’t believe their story and starts to put pressure on the boys for the truth. Both boys stick to their story and say they think Marvin (the racist neighbor) did it. The boy’s parents arrive at the station and demand to see their sons. The detectives listen in on their reunions but the boy sticks to their stories as they talk to their parents.

Ryan’s father arrives and his parents begin to argue. He says he just wants to speak to father Jonas and storms out of the room. Sharon is home from the hospital and watches videos of the interviews. Sharon tells Buzz to have Louis arrest the boy’s for the murder of Lucas. He leaves and Sharon tells Andy that she has cardiomyopathy. There is an infection in her heart and right now they have to wait and see how it progresses. She tells him they should postpone the wedding to be fair to him. He refuses. He says he does not want to wait to be her husband. They will postpone the honeymoon but the wedding will go one. He asks her to tell him everything the doctor said – word for word.

The assistant DA grills Louis about what exactly he plans to do. She isn’t sure she trusts him but he reassures her that he is in direct contact with Sharon and is following her plan. They call in a psychologist to interview Ryan. He says what is said to him will remain confidential but they hope he will discover something new. The team can’t listen to the interview but decide to watch it to see if Ryan’s body language gives anything away. The doctor asks how he is holding up since he learned Lucas is dead and Ryan begins to cry.

The team reviews Marvin’s database of illegal immigrants and learn that over half of the people on the list has been victims of vandalism or assault. Several have had “get out of my country” spray painted on their doors. Sharon returns to the station to learn that tests results on the boy’s shirts indicate chloroform. It seems they may be telling the truth. Testing also found oxy in Lucas’ blood. He still died from complicates from his diabetes but he was also drugged. Ryan tells the doctor that he told father Jonas that Hector had been beating him. Hector said that if he told anyone he and his mother would be killed.

After the interview with the doctor, Ryan is reunited with his mother as the team listens. He gets very upset and says he is going to hell. He needs to speak to father Jonas now. She tells him the priest will be back in the country in the morning. The team decides to stake out all the airports and the train station. They need to speak to the father first. Sharon tells Rusty about her condition and he agrees to have a security to help lessen her stress. Lucas’ parents are shown the lab report and his mother gets very upset when she learns he had oxy in his system. She thinks they took it from her husband but he says he knows exactly how much he had and there is no way they got it from him. She storms out.

Father Jonas is brought into the station but before he can be questioned the teams gets a report that Lucas’ father was found dead in his office. They report to the scene and find him dead with an open bottle of oxy and alcohol on the floor.