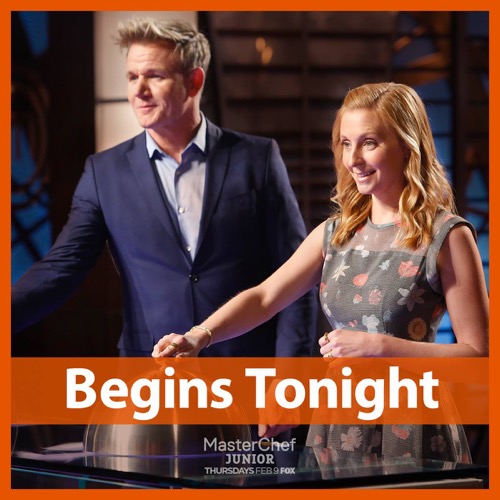 Tonight on FOX Gordon Ramsay’s Masterchef Junior continues with an all new Thursday, February 9, season 5 episode 1 called “Quest for the Apron, Pt. 1,” and we have your weekly Masterchef Junior recap below. On tonight’s Masterchef Junior episode as per the FOX synopsis, “The Season 5 premiere introduces 16 contestants competing for eight of the Top 20 spots, but once they’re split into four teams, each tasked with a specific dish, only two cooks from each group will advance to the next round of challenges.”

MasterChef Jr. season 5 premiere begins tonight with the children cheering as Chef Gordon Ramsay and Chef Christina Tosi come out to welcome the 40 best young chefs between the ages of 8 and 13. The winner will receive the coveted MasterChef trophy and $100,000 and the title of MasterChef Jr.

The chefs will be in a cook-off of their signature dishes where the judges will decide who will win a white apron and a place in the top 20.

The first group up is 4 bakers: Elisabeth (9), Barbara (9), Cydney (10) and Na’imah (10). They are given 45 minutes to create one stunning tartlet. Elisabeth had to hold a fundraiser for her to be there and Chef Ramsay admits he also had to do a charity for his first chef whites. Na’imah reveals her grandmother is the inspiration for this dish because of her peach cobbler.

Barbara is making a banana tartlet in honor of her Columbian background and Chef Ramsay tells her to move her butt. Cydney jokes she is like a soul sister to Christina as they both live in New York. She is making a dark chocolate, coconut tartlet. Her food dream is to open a cafe where she can sell baked good. Christina encourages her to stick to her dream.

The two bakers who get white aprons are Elisabeth and Cydney.

The next group of young chefs are Donovan (9), Kamryn (11), Sydney (9) and Logan (10); they are all making salmon dishes and have 30-minutes to complete it. Donovan says his babysitter from China taught him how to cook. Christina feels Kamryn is making a complicated. Sydney reveals she is making salmon in paper and her mom taught her how to do it. Chef Ramsay tells her to nail it. Logan is making salmon tacos with chips and guacamole.

The two young cooks who get white aprons are Sydney and Donovan.

The next group to enter the MasterChef Jr. kitchen are Liani (10), Jasmine (11), Mark (13) and Kaitlyn (11). The protein they need to cook with is pork chop, they have 40 minutes to make their dish. Chef Ramsay talks to Liani who is making a breaded pork chop. Jasmine tells Christina she is making a jerk pork chop, saying the jerk seasoning represents her personality.

Mark tells Chef Ramsay he is making a honey and molasses pork chop. He is told he has 20 minutes to nail it. Kaitlyn says her background is Latin/Dominican and that is what she has been taught to cook. Chef Ramsay jokes that if they put all the children’s ages together, they are still younger than him.

The two young cooks who receive white aprons are Mark and Jasmine.

The last group for tonight are Gonzalo (11), Madyson (9), Emma (12) and Justise (10); they are making scallop dishes. Madyson has never cooked a scallop before but tells Christina she is confident. Gonzalo has cooked whole scallops before as he is Peruvian. He tells Chef Ramsay if he won the money he would give some to his parents and siblings because they have helped him along the journey, and he can’t be selfish.

Christina talks to Justise, who says she wants to be a teacher and not a police officer like both her parents. Emma tells Chef Ramsay that her life dream is to have her own restaurant and teach kids how to cook. He wishes her good luck.

The first junior chef to win white aprons and a spot in the top 20 is Justise, who Chef Ramsay says did his dish “justice”; as she cries he tells her should could easily be working on the line in his restaurant, he sends her off. The second chef is Gonzalo, who also cries and thanks him. Chef Ramsay tells Emma and Madyson they could come back next year for the competition.