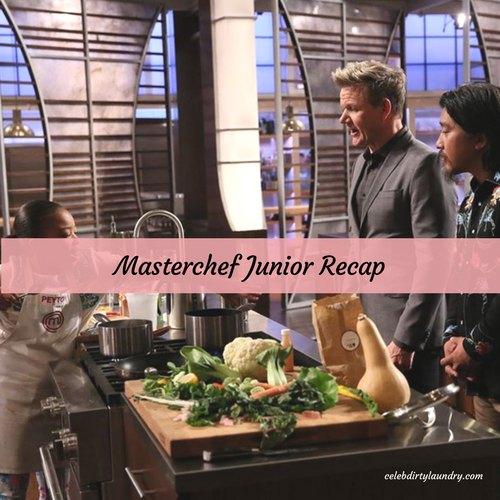 Tonight on FOX Gordon Ramsay’s Masterchef Junior continues with an all new Thursday, April 20, season 5 episode 11 called “Tag Team,” and we have your weekly Masterchef Junior recap below. On tonight’s Masterchef Junior episode as per the FOX synopsis, “Edward Lee is the guest judge when the cooks prepare dishes inspired by their families in the season’s first mystery-box challenge. Later, the contestants pair up to replicate a sushi platter.”

Tonight the top eight face the biggest mystery box of this season.  The remaining eight enter the kitchen and take their stations to see mystery boxes. Gordon introduces a special guest, Chef Lee. He will take part in the tasting.

The gigantic box in front of their stations is lifted to reveal all of their friends and family. The kids are excited to see their parents after being away for so long.

The families head up to the balcony to watch as the challenge begins. On the count of three the remaining eight junior chefs lift their boxes to see a blue apron family planning box. Each box is missing a recipe. The chefs must make something great for their families to eat from scratch.

Afnan is called forward he made a pan seared salmon with curried rice pilaf, bok choy, and swiss chard. He pan seared his salmon with butter and lemon. Gordon thinks it needs to be cooked a touch more but he did an excellent job. Chef Lee loves the spices and the flavor.

The second dish they want to examine further was made by Justice. She made a pan seared salmon with bok choy, butternut squash and cauliflower purée. She added a touch of lemon zest to her purée bringing the dish full circle. Gordon high-fives her for an excellent job.

The third dish they would like to look at closer was made by Adam. He is happy to be in the top three. He made a crispy salmon with brown rice, rainbow chard, bok choy and apple cider vinaigrette. Chef Lee takes the first bite. He likes the texture within the rice. The fish is cooked perfectly. The vinaigrette works perfectly.

The top three will have a giant advantage in the next challenge. Justice has also won a special prize – her recipe will be shared within blue aprons boxes. The families are all invited back down to the kitchen to say goodbye to the eight remaining chefs. Gordon wishes them only safe journey home.

The AR brought down to the front to hear the next challenge ahead. The eight will be making sushi. It is a tough challenge. They will work in teams. Justice will be picking all of tonight’s teams.

Justice chooses Shane be on her team. Jasmine and Adam make the next team. Cindy and Evan get paired next. They all had to their stations. The rules of the tag team require only one shop to be cooking at a time when Gordon you’ll switch they must switch off.

The challenge begins. The master chefs yell instructions to each other. Gordon yells switch. It proves to be difficult for some. Afnan and Peyton are falling apart. Adam is headstrong and doesn’t listen to Jasmine. Evan yells to Cydney to roll the sushi tighter. They switch again. Jasmine is Yelling at Adam – she wants him to butterfly the shrimp but he is busy cutting the rolls. Chef Lee tries to help them communicate better. 20 seconds until the next switch. They only have 20 minutes left to complete their dishes. Gordon gives Cydney advice. Their communication skills improve. 30 seconds to go until the last switch. Jasmine is yelling Adam to cut the scallions. “Faster, faster” they all yell to each other as the clock ticks down. Sheen can’t get his shrimp off the stick it’s too hot. They all rally around each other. Times up!

Cydney and Kevin are called up next. Gordon thinks that their plate looks sloppy and very messy. The sushi is cut way too big. He does think that the shrimp is cooked deliciously. He points out that Japanese cuisine is all about precision. Cydney cries. Gordon tells her that she is a smart cook. Sometimes she needs to push on. Their platter of sushi is a mess.

Adam and Jasmine win best sushi platter of the night. Shane and Justice made 2nd place. The last 4 come to the front. Afnan and Peyton are called forward. Their time is over. They will go home. All 4 of them cry. Gordon hugs them goodbye. The other watch from the balcony.