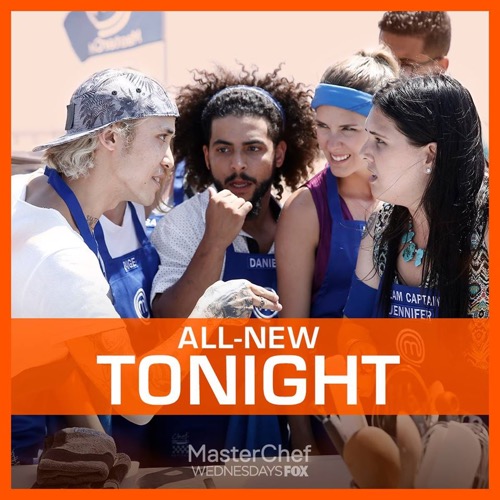 Tonight on FOX Masterchef returns with an all new Wednesday, June 21, Season 8 episode 4 called, “Feeding the Lifeguards,”  and we’ve got your MasterChef recap down below! On tonight’s MasterChef Season 8 episode 4 as per the FOX synopsis, “The Top 19 cooks compete in the first team challenge of the season, which involves preparing fresh fish on the beach for 101 lifeguards, who cast their votes for their favorite dish.”

So make sure to tune in between 8 PM – 9 PM for our MasterChef recap.  While you wait for our recap make sure to check out all our Masterchef spoilers, news, videos, pics & more, right here! Tonight’s

Masterchef recap begins now – Refresh Page often to get the most current updates!

MasterChef begins tonight with the Top 19 being greeted by judges Chef Gordon Ramsay, Chef Christina Tosi and Chef Aaron Sanchez, who arrive on ATV’s at Huntington Beach, California where they will be competing in their first team challenge. They will be cooking lunch for 101 lifeguards.

Brien is the first team captain and Christina tells the cooks to separate themselves into 2 teams of 9. Gordon tells Brien to go to the team he wants to lead, he chooses the red team and Aaron tells the blue team to choose their captain, they choose Jennifer. The dish they are making is fresh Pacific rock fish and striped sea bass; two very different fish.

Brien now has to choose which protein his team will work with and he chooses the sea bass. The teams are given 60 minutes to create their dish that needs to have two stunning sides and an incredible sauce. The winning team will be safe from the elimination challenge.

Brien is working well with his team, listening to them all while Jennifer is not organized and not really listening to people. She doesn’t really have a vision and the team isn’t too happy with her leadership.

Chef Ramsay does a check in with Brien who says they are making a crispy skin sea bass with a side of bamboo rice with peas, crispy eggplant and pineapple, grilled corn salad. He notes that it is smart they are cooking the fish skin side down, he tells him to delegate, divide and conquer.

Chef Christina meets with Jennifer who shares they are cooking the fish on cast iron skillets on the grill. The sides are a vegetable medley, kind of savory and spicy, potatoes and a broccoli slaw. Christina is confused about what they are actually making as Jennifer rushes off to work on the dish.

Gordon is not impressed with the red team when Newton reveals they have cooked huge amounts of the fish and store it under the table until serving time. He is furious that he gave him the best fish and treating this like its a banquet. He swears that their timing is screwed telling Necco to separate the good ones from the bad ones.

Chef Gordon Ramsay thanks the lifeguards for being such heroes and tells them to pick up a plate from the red team and the blue team. The lifeguards are thrilled to be served a nice lunch on the beach.

Chef Ramsay isn’t pleased with Jennifer’s performance as lifeguards have to wait for the fish. Jeff jumps to the front and takes over in an attempt to keep the team afloat. Chef Ramsay visits the red team and learns their eggplant is soggy because the oil wasn’t high enough; he is angry with Jason who knows the eggplant would suck up the oil and is serving the soggy crap to these lifeguards. He orders them to smarten up and treat these dishes as the best they have ever cooked.

Chef Aaron is told the fish is too spicy, the avocado softens the bite but the fish cannot be eaten alone. Reba is mad that Paige used half a bottle of Cayenne on the fish and most of the lifeguards are saying they cannot get past the taste of the seasoning. Chef Ramsay orders them to get a grip and do better. Dino says if they don’t get this right now they will be sleeping with the fishes.

Daniel takes the skin off the fish and tells them to plate them with the skinless side down. Chef Ramsay says at least they will still be getting fish that isn’t over seasoned; thanking Daniel for using his head. The dining area seems pretty split when asked what they thought of each dish.

Christina brings up the last lifeguard they have to serve, when he is given his plates she tells them service is over. The blue team feels they had a rough start but stuck it out and might have done enough to win. The red team isn’t sure either as Gordon and Christina say they can only have one winning team, she wants all 101 of them to run to either the red or blue flag to see who won.

The winning team is clearly the red and the blue team led by Jennifer will be facing the pressure test and possible elimination.

Back in the MasterChef kitchen, the red team lead by Brien are standing on the balcony as Jennifer and the blue team compete the dreaded pressure test. Christina tells them based on their performance yesterday, not all 9 of them will have to compete; each judge is going to choose one of them to save. Gordon chooses to save Jeff. Aaron chooses to save Daniel and Christina chooses to save Reba ad they are sent upstairs.

The challenge is making Chef Aaron’s version of an American hearty comfort food: grilled pork chops. He shows them how to prepare a cactus and cactus fruit for cooking. They come up and taste his dish to familiarize themselves with what goes into the dish. They have 45 minutes to replicate Chef Aaron’s stunning dish.

Christina sees Dino who is vegan, he feels at least he got the sauce on point. She tells him someone is going home, telling him to make sure its not him. Gordon talks to Paige who is only 18-years-old. She is part Mexican and very familiar with the flavors. She is confident she can do this.

Aaron comes to Caitlin’s station, who is nervous about cooking a dish she has only tasted one time. He reminds her to work on her presentation. The cooks on the balcony notice that Jennifer is losing her mind. She is flustered and out of her comfort zone as she cooks with things she has never done before. She begins to cry and the judges question if she is okay.

Gordon comes to her. She shares her passion and hunger is very real for her. He encourages her to bounce back. Christina is worried the most about Gabriel who has an issue with mind over matter. Aaron is concerned about Paige whose sauce is very slimy and runny, he feels she is all over the place.

First up is Jennifer, Chef Ramsay asks if this dish will bring her redemption. Her pork chop is under-cooked and he tells her all they need is a mud bath and it could go back in the field. He is concerned that one knock back and she disintegrates and she has one foot out the door.

Christina calls up Gabriel who admits it was a rough pressure test as he was really out of his comfort zone. His pork chop is perfect and its clear he has the knife skills, the sauce is a bit slimy but over all it was a nice job.

Caitlin approaches the judges, she hopes her dish will match their expectations. Aaron tells her the pork is a little bit under. The spices are nice, he loved how she did the cactus and the sauce had good vibrancy.

Dino brings up his dish, believing the pork chop is cooked. Chef Ramsay cuts it and reveals its cooked beautifully. He says the dish is delicious, but the knife cuts are good but its a nice job.

Aaron calls Jenny forward. She is very concerned the dish could send her home. The seasoning on the chop is great, the sauce is good but she needed more tequila, it needed a lot more cactus but all in all it was a good job.

Paige brings up her dish and she feels confident about it, almost overly confident saying she nailed it. Christina tells her that the stark white fat tells her already its not good. She confronts Paige on being almost too smiley for this test. The pork chop is under-cooked and she says she would not want to eat it. There is an elegance to the dish but the sauce and pork chop show she just doesn’t care. Christina isn’t buying her excuses.

Chef Aaron Sanchez says they could be saying goodbye to at least one of them. Dino is quickly told to join the others on the balcony. Pork chop is his mother’s favorite dish and feels she will be super proud of him and this dish validated his place in the kitchen.

Gabriel, Caitlin and Jenny also impressed the judges and told to go up to the balcony while Jennifer and Paige are left standing in front of the judges.

Chef Gordon Ramsay asks Jennifer if she has peaked. She says she really cares about being there but he feels they are not tasting it. It is understandable that Paige is the youngest, but he is concerned that she doesn’t have the heart nor passion to be there. He tells them both to pay close attention, they are going to the balcony and ask the home cooks who should stay in the competition.

Everyone on the balcony says Jennifer, Gordon says Aaron, Christina and himself agree and he tells her to go up to the balcony. She feels she needs to get out of her head and gain the confidence she needs to get through this competition. Paige is asked to place her apron on her station and go home.