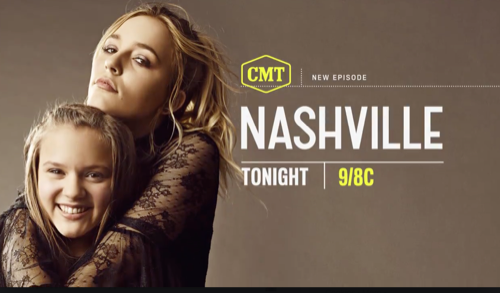 Tonight on CMT Nashville starring Hayden Panettiere returns with an all new Thursday, June 15, 2017, season 5 episode 14 called, “A Fool Such as I” and we have your weekly Nashville recap below for you. On tonight’s Nashville episode, as per the CMT synopsis, “Maddie and Clay get pulled over by a police officer; Juliette searches for the perfect song to re-launch her career; Damien George returns to Nashville with grand ideas for Scarlett.”

Glen tells Juliette to stop pushing herself. She needs a hit. She wants to make a new album that is a mindblower. She’s going to start writing songs. Glen chuckles, she’s back!

Damian shows up at Scarlett’s. Gunnar answers the door. Gunnar isn’t happy while Damian is over the moon that they are having a baby. Damian hugs them.

At the office, Bucky answers the phone. It’s someone calling from the Blue Bird looking for Deacon to perform. Deacon isn’t so sure. He hasn’t touched a guitar since Rayna died. Bucky talks him in to it. Deacon agrees to play. Deacon apologizes to Bucky about his job and how things turned out. He thanks him for everything.

Maddie falls on the bed with her guitar in her hands. She tells Clay she is worried that’s some people may not like her music. The two sit down and sing together. Daphne calls, they are playing Maddie’s song Saved on the radio. Clay and Maddie dance around in excitement.

Gunnar asks Scarlett what Damien means when he said “we are having a baby.” Scarlett reminds him that is about the baby. Gunnar can’t figure out what she wants.

Juliette is sitting with Glenn. She is mad. She can’t find a great song. She finds out that the Jimmy Kimmel show bumped her appearance to boot. She wants Travis’ number. She is going to call him.

Maddie is doing a radio show, discussing her music when she is asked about Rayna. How does she feel trying to fill her mom’s boots? The situation gets uncomfortable.

Deacon wants the girls to get ready to go to the Blue Bird. They don’t want to go. He is going to trust them this time. They need to keep their butts on the couch.

At the Blue Bird, Deacon introduces Jessie Kane. The performers all sit in a circle playing guitar. After the show, Jessie tells Deacon she is sorry about Rayna.

Maddie and Clay are driving in the car. The cops pull them over. The cops tell Clay that he rolled through a stop sign. Maddie tells the officer that they never rolled through a stop sign. Maddie starts recording the incident on her phone. The officer won’t answer any questions. Maddie gets out of the car after they ask Clay to get out. The officer detains them both. Maddie calls Deacon.

Deacon picks them up at the station. Clay is shaken up. Maddie was standing up for their rights. Clay tells her that’s not how you do it.

Juliette pays Travis a visit. She wants to write a song. Travis wants to know about Maddie. He wants to get her a song.

Damien is driving Scarlett and Gunnar to a secret place. They arrive at a house. He wants them all to move in and co-parent.

Deacon pulls Daphne aside. He tells them that the situation with Liv can’t stay like this forever. Deacon doesn’t want to kick her out. Maddie yells from the other room. A video of her arrest is online.

Damien shows Scarlett the baby’s room. Gunnar leaves to go outside. Damian tells Scarlett he is sorry for the way he reacted. He thinks she is going to be a great mom. He kisses Scarlett and she kisses him back. He thinks they can start a real little family. She needs time to think.

Clay is walking down the street. He is approached by a paparazzi who keeps asking him question about the nature of his relationship with Maddie.

Juliette arrives at the studio. Inside Maddie is watching news reports of her video. Zach reassures her that they are sending out press releases. Juliette comes in. She tells Maddie to handle the situation with grace. It is all going to be fine.

Scarlett opens the door to see Gunnar working. She asks him if he is busy. Does he want to talk? Scarlett tells him that Damian asked her to live with him. She admits that she doesn’t know what is right anymore. Gunnar tells her to figure out what she wants.

Deacon is sleeping when Scarlett arrives. She sits down on the couch and cries. Deacon wants to know what is wrong. She doesn’t know what she is going to do. Deacon tells her to be honest with herself and let the chips fall as they may.

Clay is at the club. Maddie shows up. He can’t go home. There are too many reporters at his house. They live in two different worlds. He needs sometime. He cares about her but she needs to let him be for now.

Damian and Scarlett meet up. Damian admits to being a bit of a playboy. She walks off. He yells to her that he still loves her.

Juliette calls Travis and tells him that Maddie didn’t care for his song, but she would love to put it on her album. He agrees.

Maddie is crying to Deacon. She tells him about Clay. He reassures her that if it is meant to be there isn’t anything in the world that can stop it.