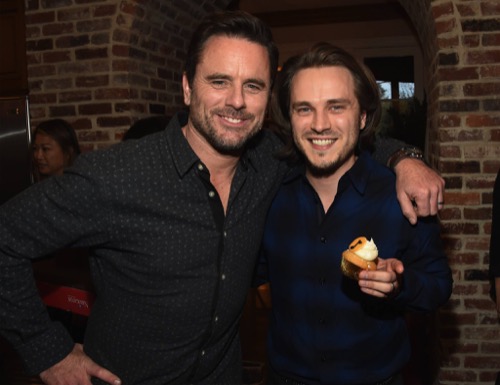 Tonight on CMT Nashville starring Hayden Panettiere returns with an all new Thursday, June 22, 2017, season 5 episode 15 called, “A Change Would Do You Good” and we have your weekly Nashville recap below for you. On tonight’s Nashville episode, as per the CMT synopsis, “Maddie deals with the fallout from the video of her and the police officer; Deacon and Avery are smitten with Hallie’s special sound; Zach continues to exert his influence on Highway 65.”

The media is outside the home of Maddie after video of her surfaced online. On TV, one reporter calls Maddie’s meltdown a cry for help after losing her mother. Deacon heads into the office. Zach wants him to meet Alyssa Green, a go to exec who helps failing businesses. Deacon agrees to hear her pitch.

Hallie is afraid to go on stage. Juliette gives her a pep talk. She gets on stage and kills it as Deacon, and Juliette watch from the audience. The crowd goes wild. At home, the media is still outside. Maddie calls Clay. He hates all of this attention and he isn’t going outside. She offers to come to him, but he turns her down. Maddie falls on her bed, upset.

Zach talks to Deacon about Alyssa. He wants to hire her temporarily to see if she can help. Deacon has Maddie on his mind. A PR rep stops in and tells Deacon they all need to get on the same page. Maddie needs to release a statement apologizing. Deacon is taken back.

Deacon calls Hallie. He wants to meet her for dinner. Meanwhile, Daphne and Liv are having fun with make-up in her room. Maddie comes in and asks what she is doing. Their mother didn’t want them to wear make-up until they were older. The door bells rings. It’s Bucky. He has come to talk to Maddie about her image.

Juliette is working on the studio. Maddie shows up. She wants to see her process. Juliette doesn’t want her to hear the song she stole from her. Meanwhile, Alyssa is talking to the gang. She is brutally honest. She wants them to create songs for brands. None of them take to it well. Zach wants them to try.

All of the gang gathers for dinner. Deacon welcomes Hallie to Highway 65. They all toast. Upstairs, Liv and Maddie are hanging out. Liv has created a meme of Maddie. Daphne tells her not to publish it. She does. Daphne shakes it off like it is no big deal.

Maddie is in her room looking at the internet. She comes across a news report that reveals Clay isn’t a stranger to the law. Years earlier he fought with his mother’s boyfriend. He barricaded himself in the bathroom, threatening to kill himself. Maddie calls him and gets voicemail.

Scarlett comes to visit Deacon. She asks about Maddie. Deacon asks her about her situation with Gunnar. She finds it weird that she doesn’t want to be physical with Gunnar. Deacon tells her that she may not feel a certain way now but that could change.

Clay is trying to drown his troubles in music. The phone won’t stop ringing. It’s Maddie. A reporter shows up and wants to talk to Maddie. He sees her as an ally of people of color.

Hailie doesn’t want to leave her band behind. Juliette cannot understand. She needs to leave George behind and take her big break.

Avery, Gunnar and Scarlett are shooting pool talking about Zach and Alyssa, and all of the changes at the studio.

Avery meets with Hailie. She sings her song in the studio while he watches. Maddie finally sees Clay. He hasn’t slept in days. She can’t believe they are breaking up. He tells her that they were never boyfriend/girlfriend. He feels so much for her. But they were never going to work. She hugs him as he cries.

Maddie cries to Deacon. He hates to see her in pain. He has her back. She isn’t sure what to do.

Will doesn’t want to be put in the middle with Zach and the rest of the Highway 65 family. Zach tells him that Budweiser wants him. Will’s interest is piqued.

Maddie videos live, talking about the police and Clay. How her actions caused him pain. She sings as Daphne sits next to her. When the song and video ends, they hug.