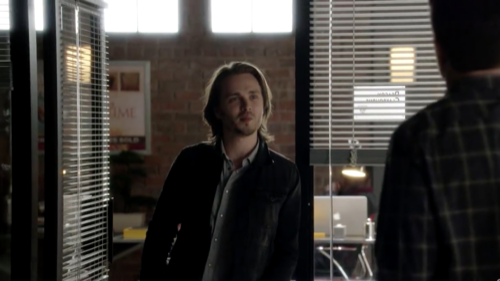 Tonight on CMT Nashville starring Hayden Panettiere returns with an all new Thursday, July 13, 2017, season 5 episode 18 called, “The Night Before Life Goes On” and we have your weekly Nashville recap below for you. On tonight’s Nashville episode, as per the CMT synopsis, “Juliette continues to be plagued by her injuries; Avery gets a taste of independence; Scarlett and Gunnar shoot a national commercial; Deacon plays a benefit for a charity.”

Daphne is getting ready for school. She gets a text about a party tomorrow from a friend. Deacon takes a call from a social worker from FosterMore, who has found Liv a good home. Deacon is also set to play a charity show for them and has promised to donate something of Rayna’s.

Gunnar and Scarlett meet with Alyssa and an exec for a brand at the studio to discuss their commercial plans. They don’t feel like they should shoot anything at the moment given their bad press situation. The exec thinks they are the perfect celebrity couple to shoot the commercial.

Avery stops by Deacon’s office to say goodbye. Avery is sad he is leaving and he will miss all the firsts his daughter is having. He asks Deacon how he is holding up. Deacon isn’t doing well. He can’t seem to bring himself to donate anything. Avery tells him not to put a timeline on grief. Nobody can take away what they had, even if he gives away something of Rayna’s.

Deacon tells the girls at breakfast the next morning that he plans to donate something of Rayna’s. They get upset. He shows them the jacket he plans to turn in. They no longer care. The jacket is ugly.

Scarlett and Gunnar show up to shoot their commercial. They aren’t happy. Juliette is at rehearsal. She is a little rusty. The director wants her to take it easy but she doesn’t want to.

Avery arrives in Atlanta. He checks into his hotel and hits the bar for a soda. Nell, the bartender, is extra friendly to him when he tells her he is there to open for Dierks Bentley.

Daphne asks Maddie to make her eyes look smoky for the party. She is nervous to go. Maddie tells her to be herself.  Alyssa escorts Gunnar and Scarlett to the set. They are nervous. Scarlett gets even more, nerve racked, when they carry out a baby crib for the commercial.

During rehearsals, Juliette begins singing and takes a small fall. The director gives her a pep talk. Things have changed for her and that is okay.

Deacon arrives at the charity event. Deacon asks the director who else is playing. Lady Antebellum and Jessie Caine will be hitting the stage.

Daphne arrives at the party. The parents aren’t there. The kids all start making out and drinking. Daphne sits with a boy she doesn’t know and looks horrified.

Avery is at the bar. He is eating and drinking. Juliette calls him on her way home. He answers drunk. She can’t hear him. Nell grabs the phone from him and tells Juliette she is infringing on his drinking time.

Deacon sees Jessie at the table. They are sitting together. Meanwhile, Gunnar plays the piano while he and Scarlett sing. Scarlett begins crying in the middle of the shoot. The director yells cut. Gunnar comforts her. Alyssa comes to Scarlett’s side. Scarlett wants to do a commercial for a table like they planned, not a crib. She feels like she is already pimping out her baby that it isn’t born yet.

Jessie’s arrogant ex-husband who is also in music comes by the table during the charity dinner to talk to her. Their son is grounded again, he tells her. Jessie looks upset and tense. Deacon notices.

Daphne is outside on the swings. The friendly boy comes out. He is uncomfortable too at the party. They hear a bird making noises. They discuss his love of nature. He apologizes to her for inviting her to a party like this.

Avery is very drunk at the bar. He asks Nell who can fix his TV in his hotel. She asks who Juliette is. He tells her that it is all complicated. He describes Juliette as a hurricane and he is the calm who just picks up the pieces. That’s why he is on tour. Nell offers to fix his TV.

Rayna’s jacket goes up for bidding. Deacon looks uncomfortable. He gets up and leaves as the bidding hits $50k. Jessie watches him with a sad look. Her ex texts her – “step daddy material?” She looks annoyed and shakes her head.

Scarlett and Gunnar drive home. They stop for milk. Meanwhile, Jessie comes out to blow off steam. She sees Deacon. She tells him she isn’t there to talk. He asks her what she is upset about. Is it her ex? She explains that she is sad for her son who is being raised by her ex. He is a cruel man. Deacon tells her that she will prevail. He gets called in to sing.

Juliette calls Avery. Why didn’t he text her back? And why is he whispering? She asks him who he is. He confesses, he is with Yuri. The maintenance guy who is fixing his TV. He hands Yuri the phone. Juliette wants to kill him. Avery tells her that he misses her and their daughter. He is scared he is going to miss a lot.

Deacon hits the stage and sings a song he dedicates to Rayna. Gunnar and Scarlett come out of the grocery store. They are arguing about the baby when they are interrupted by three guys. They want Gunnar to buy them beer. He tells them to buzz off politely. One of the guys gets mad and pulls out a gun. Gunnar hands over his wallet on command. The guy wants Scarlett’s wallet too. She moves forward and spills her milk. He pushes her against a car. She falls. Gunnar steps in. The guy points the gun at him and makes him get to his knees. He does. The 3 guys run off.