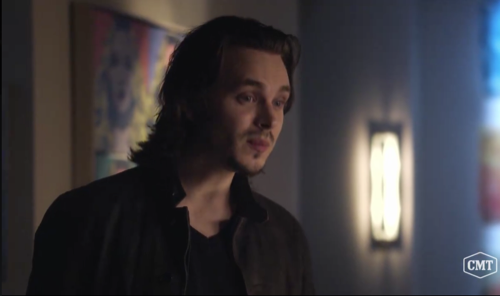 Tonight on CMT Nashville starring Hayden Panettiere returns with an all new Thursday, June 29, 2017, season 5 episode 17 called, “Ghost in This House” and we have your weekly Nashville recap below for you. On tonight’s Nashville episode, as per the CMT synopsis, “Scarlett confronts the journalist Mackenzie Rhodes face-to-face; Will shoots a big-time commercial; Deacon feels pressure from the outside to move on from Rayna.”

Deacon and the girls go to breakfast. A women who knows Deacon sees him. She is sorry for his loss, but it’s good he is getting back in the swing of things. She reminds him that he has her number. The girls look disgusted.

Scarlett vents about Mackenzie Rhodes to Alyssa, who decides that some positive press is best. She wants Scarlett to play a surprise gig just for her fans. Scarlett looks optimistic.

Will sits in a meeting with the beer company where they explain what he will do in the commercial. Straight woman love him. It’s going to be a hit.

Zach has brought in a country singer named Lexi who has a messy past. Deacon comes in to the office to see Juliette and runs into them. He knows her. He is surprised to see her. Zach presses him to meet with her. He is thinking of signing her.

Will is dressed in cowboy attire. An executive comes in. He says hi to Will and then dismisses everyone from the room. He tells him he knows Zach, a young man who has billions and is known to but what he wants. Will looks confused.

After performing her surprise show, Scarlett is approached by a fan who she has met before. She is mad. She loved Scarlett. Why did Scarlett cheat on Gunnar? She loved them together.

Deacon meets Jessie at a diner. She apologizes that Zach sprung her on him. She has made mistakes. She stayed in a marriage that was dead. Her ex ended up marrying her assistant and her best friend. Deacon shares what has happened in recent years with her too. The two share a moment. Deacon realizes the time and has to leave to go get Daphne. He asks her to send her new music to him.

Avery, Juliette and the baby are eating breakfast. Juliette shares that she will be late tonight. Avery tells her he will be home. She is surprised. She thought he would be working with Hallie. Avery tells her that he has found her a new producer. Juliette tells him that he must have seen something in the situation too if he did that. No, he tells her. He has to do with her going insane.

Scarlett shows up at the office of Mackenzie Rhodes. She calls her a liar. The reporter is unapologetic. She was doing her job, getting the scoop. Scarlett tells her that she shamed her for no reason. She feels sorry for her.

Will arrives at the hotel in New York where Zach is. Zach asks him why he is acting strange. Will asks him if he is seeing other guys. Zach laughs it off. He makes jokes about the sexy texts he gets about shipments. He tells him there Will is it for him. Their guests arrive.

Deacon arrives home to see that the woman they met at the diner has left a pot pie. The girls make jokes. Deacon heads into his home studio and listens to a voicemail from Jesse. She had a great meeting with him and would love to work with him and Zach.

Scarlett messages and meets her distraught fan. She explains to her that she is beautiful. The young girl doesn’t believe it. She explains to Scarlett why she was so let down by the news that the baby wasn’t Gunnar’s.

Alyssa meets with Deacon outside of work. She wants to know what she can do to help him with the business. He explains that he is just a guitar player who doesn’t want to see his dead wife’s dream die. They talk about Jessie. Alyssa senses something is there. Deacon is surprised. What is she talking about?

Will wakes next to Zach. His phone is buzzing. Will gets out of bed. In the next room another cell buzzes. Zach has two phones. A man named Jeff is calling. The next morning, Will packs. Zach is confused. Will asks him why he has 2 cell phones. Will doesn’t want an explanation. Zach tells him it isn’t what he thinks. Jeff is a guy who loves him. He doesn’t feel the same. But Jeff is fragile. He can’t let him go. He night do something.

Scarlett explains to Gunnar that being a girl is difficult. It is a lot of pressure. Scarlett gets an idea.

Deacon calls Jessie back. He wants to hear her songs. But he can’t go hear her play. Things are weird for him right now. He wants to make things clear between them. She is insulted. She is the last woman he needs to worry about. She isn’t like all the other woman throwing themselves at him. She will probably never date again. She lets him go. He hesitates and then says goodbye.

Zach brings the Highway gang together to see Will’s new commercial. They all clap. After, Zach wants to talk to Will alone. He calls Jeff who breaks down. Will thinks it was horrible. He is afraid that Zach will do that to him one day.

Avery comes home to tell Juliette about a tour he is headed on. Juliette breaks down and cries. He needs to do something for himself. He isn’t breaking up with her. He’s only going to be gone for 7 weeks. She gets up and walks away.

Scarlett hosts a group of teens to talk about feeling shame. About how she grew up feeling bad about her low weight. Her lazy eye. They go around the room. Mackenzie shows up. She has a story too. She says sorry for her behavior.

Deacon watches Jessie sing at the club. Her sing bothers him. He leaves the club.