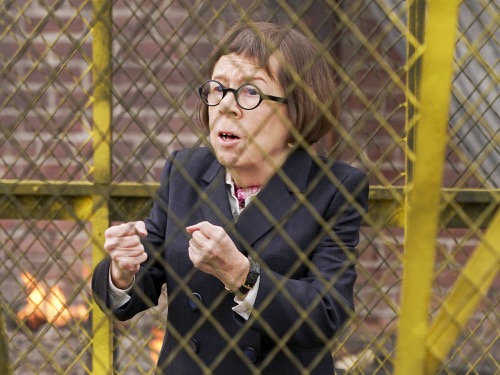 Tonight on CBS NCIS: Los Angeles returns with an all new Sunday, January 29, 2017, season 8 episode 14 called, “Under Siege” and we have your weekly NCIS: Los Angeles recap below. On tonight’s NCIS Los Angeles episode, as per the CBS synopsis, “Hetty (Linda Hunt) goes rogue, leaving the NCIS team completely in the dark, and the mole kidnaps one of the agents.”

NCIS: Los Angeles begins tonight with Carl Brown (Adam Bartley) being forced into a prisoner transport van with an inmate, Vincent Garvey (Dale Pavinski) who has tried to kill him. The van is blocked from its route and the prisoner tells Carl it is his lucky day because there is a bounty on him.

Sam Hanna (LL Cool J) is speaking to DEA Agent Mario Sanchez (Carlos Sanz) about the finances of each government agency, asking him who has more money than all their agencies combined; the CIA, confirming they are being played and asks to speak to the Special Agent in charge.

G. Callen (Chris O’Donnell) manages to get out of handcuffs as ATF Agent Duke Morgan (Corey Reynolds) returns to the room to interrogate him some more. Callen attempts to escape but fails, Agent Morgan promises he will pay for what he did; when he leaves the room, Callen calls Kensi Blye (Daniela Ruah).

Kensi informs him they have reason to believe Heather (Gretchen Palmer) has links to the CIA but they are trying to confirm it; she tells him Duggan (Jackson Hurst) was killed by a sniper outside the boat shed. As Callen asks Kensi about Owen Granger (Miguel Ferrer) but before she can answer Agent Morgan returns for his phone.

Hetty Lange (Linda Hunt) watches the news with Kensi, Nell and Eric as Granger remains in a coma in the hospital. Hetty orders them to release all non-essential personnel for their own safety. Hetty tells them she is going to the hospital as the “wolves are there for all of them” and someone needs to watch over Granger.

She tells Kensi to stay with Nell and Eric as she is now in charge since Hetty no longer works for NCIS. As she leaves she tells them the house may not fall; Eric is to tell everyone to go home and Nell is to make sure there is no access to the building. Kensi says it is time to lock and load.

We find out that he men who took Carl work for Hetty. She sits in front of the cage, tells her men to take Garvey to the beach before they return him to prison but if he does anything funny, shoot him. She informs Carl he is there for bait.

As Eric is preparing the rooms with weapons, he notices there was a trojan sent in emails Kensi shared with CIA Agent Vostanik Sabatino (Erik Palladino); all realizing he is the mole. This confirms everything Heather told them about the CIA.

Nell comes to see Callen, acting as his lawyer. She gives him a file and demands to speak to Agent Morgan’s boss. While Nell is gone, she leaves a handcuff key and ear piece attached to the bottom of her coffee cup.

Deeks is able to talk to all the gang members in the cell with him when Kensi arrives. Det. Whiting says there is a subpoena for Kensi to reveal everything she knows about Deek’s former partner. She kisses Deeks which infuriates Whiting. Whiting leaves and Deeks puts an ear piece in, contacting the team including Sam and Callen.

As Kensi leaves she runs into Sullivan (Kurt Yaeger), who tazes her and puts her in a wheelchair. Everyone can hear her but no one can see what is happening.

Eric reveals Kensi was abducted by the man she was talking to; Deeks confirm it was Sullivan, the vet from rehab. Deeks orders Eric to get the footage to LAPD immediately meanwhile Callen escapes, before Agent Morgan can stop him, he knocks him in the throat and leaves.

Hetty’s phone rings and Eric reveals Kensi has been kidnapped, Callen is out of custody but they are still working on Sam and Deeks. When Eric asks if she is with Granger, she tells him no and hangs up. Carl taunts Hetty about her plan failing, she says she will kill him herself.

Deeks pleas with Detective Whiting, after she shows him the footage of Kensi being abducted. He tells her what is happening to his team is much bigger than her witch hunt for dirty cops. She says if she helps him find Kensi, he has to tell her the truth. She agrees to let him out. Sam is also released after he showed the agents what happened with Kensi.

With most of the team together, Eric reveals that Sabatino appears to be the mole; all of them wonder what the CIA’s beef is with NCIS. Sam says Callen worked for the CIA, he knows what they are capable of. Kensi wakes up strapped to the wheelchair wanting to know why Sullivan is doing this. Sullivan injects her hand, causing her to pass out.

The team gathers weapons, puts on bullet proof vests. Nell confirms that Kensi sent everyone home on Hetty’s order. Hetty has turned off her phone and no one knows where she is. Det. Whiting is there with Deeks, not happy she is there but admitting they need her help.

Nell uncovers a voice message from DEA Agent Mario Sanchez, he is telling Hetty that they had kept her man as long as they could but he was getting adamant about being released and they were no longer comfortable holding him. Whiting admits she nabbed Deeks because she got new information on his former partner’s death.

Whiting is shocked that Hetty put the bodies in Sam’s truck and Callen’s house, and the only reason Kensi was taken is because she disobeyed Hetty. Callen asks them to dig up anything they have on the CIA. They are also curious about CIA Officer Ferris aka. Sullivan.

Eric confirms where Hetty was the last time she used her phone to call him. A vehicle arrives, and Carl points to the cabinet Hetty went to hide in, the man shoots at the cabinet and Carl tells him to shoot lower because she is small. When the shooter opens the cabinet, Hetty comes up from behind the shield and kills him. Hetty asks Carl if this shooter was his friend, when he answers CIA Officer Randall Sharov (Salvator Xuereb) and CIA Officer Vostanik Sabatino (Erik Palladino) reveal the shooter was with them. They order her into the cage, locking her in. Sharov offers Carl a gun, asking if he wants the honors, he takes the gun.

Callen, Deeks, Sam and Whiting arrive to the site where Hetty’s last call originated from. Carl points a gun at Hetty, telling her his face is the last thing she will see. Fiesty Hetty is not afraid of telling the agents how shameful they are, and she did everything she did to protect her people. Sharov reminds Hetty that she was warned to stay out of the Middle East.

She asks where Kensi is and Carl says they don’t owe her anything. Sabatino admits he doesn’t know where she is but Sharov tells her Ferris has her and it is unfortunate for her because they have a history she isn’t aware of.

Hetty sits on the cot and wraps herself in a blanket laughing at how predictable men are. Carl questions her laughter and she says she is the only one in a safe place now. She presses her brooch, covers herself with the blanket and the building explodes.

Outside her team rushes towards it, they find Sharov dead and the one she shot; Sabatino is alive and so is Carl who reaches for a gun. He shoots Whiting in the neck but Callen kills him. Deeks rushes to Whiting, he begs her to stay with him and confesses that he killed his partner because he was a dirty cop. He says he did a bad thing for a very good reason. He encourages her to stay alive.

Kensi slowly wakes up, who tells Ferris to let her go and run for his life. She says if he hurts her, the NCIS team will hunt him down. He blames this all on Hetty, talking about global security. He reveals he didn’t lose his leg from an IUD, that some American heroes were there and blew his leg off.

He says this is personal and Kensi admits she thought he was Taliban and it was a mistake. He says they tried to warn them a bunch of times to not interfere. She apologizes for shooting him in the leg. He says he is not going to kill her but he is going to pay her back for what she did. He pulls out an electric saw and she screams no.