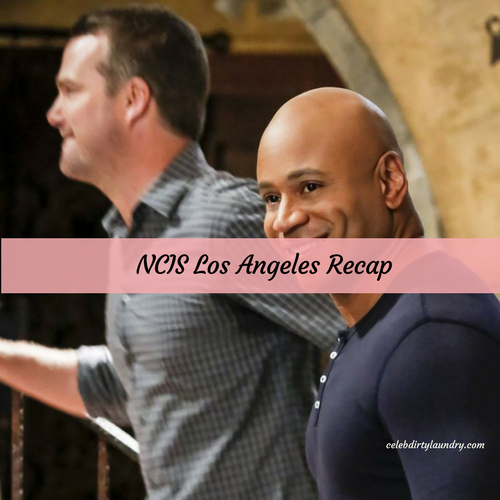 Tonight on CBS NCIS: Los Angeles returns with an all new Sunday, March 19, 2017, season 8 episode 18 called, “Queen Pin” and we have your weekly NCIS: Los Angeles recap below. On tonight’s NCIS Los Angeles episode, as per the CBS synopsis, “The U.S. Treasury Department is hacked, and Neil (Renée Felice Smith) and Eric (Barrett Foago) undercover inside a couple’s retreat to track a tech-savvy husband and wife who are linked to the crime. Meanwhile, Digital Forensics Specialist Dave Flynn arrives from the NCIS cyber office in San Diego to run ops while Eric and Neil are on assignment.”

NCIS: LA begins tonight with two men finishing dinner, and one being injected in the neck as the other leaves scene. G. Callen (Chris O’Donnell) and Sam Hanna (LL Cool J) arrive at work talking about body work needed on a car Sam has been working on for 5 years. Eric Beale (Barrett Foa) calls them up for a case.

Nell Jones (Renee Felice Smith) informs them there was a cyber attack on the US treasury department system; some of the stolen information is data on undercover IRS agents and their counter terrorist investigations.

One of the suspects, Logan Gorman (Andy Cohen) was found dead last night in a private dining room in Beverly Hills, his dinner guest is unknown as there is no surveillance, but the wait staff are creating a sketch for them now. The second set of suspects are a married couple, Tara and Paul Nelson.

Sam jokes if he is a friend of Deeks, he doesn’t trust him; Sam and Callen go to the crime scene. Just as they are about to leave Hetty Lange (Linda Hunt) has something else for Callen to do and orders Sam to meet Anna Kolchek (Bar Paly) at the restaurant instead.

Deeks and Kensi meet Donaldson at the boat shed, where they share a quirky joke; both their initials are MD and keep calling each other “doctor”. He wants their help in locating Tara and Paul as soon as possible. Together they have over 20 years of high-tech experience and no criminal background; but they are suspects because they have both been in contact with Logan Gorman a lot in the past few weeks. Donaldson suspects they are looking at a hacking ring.

At the restaurant, Anna is curious about the special assignment Callen is on, but Sam doesn’t know anything. She learns Logan had his wallet and an expensive watch on him when he was found, meaning it wasn’t a robbery. He requested to sit at the Captain’s table, and that his guest arrive and leave undetected through the kitchen.

Eric, Nell, Kensi and Deeks wait at Hetty’s desk, and when she arrives she with Special Agent Dave Flynn (Scott Grimes), he is a digital forensics specialist to help them with this case. Dave informs them Tara and Paul are on an overnight retreat; Deeks is excited about it but Hetty tells him they will be foregoing their undercover for over watch duties; they learn Eric and Nell are going undercover instead of them. Eric is anxious about not being in the ops room, but he is even more stressed about having to wear hiking boots and long pants.

Deeks and Kensi go outside to find their vehicle for this case is an RV; Kensi is thrilled. She tells him to get in and she is driving, no debating about it. Meanwhile Eric and Nell arrive at their cabin, and quickly decide who will sleep where.

They go over their undercover stories and leave to meet the others, and set up surveillance as they head to the lodge. Deeks says they both look pretty cute right now in their camping outfits. Callen parks his car and is watching someone’s house.

Nell and Eric are welcomed at the lodge, where they are told to enjoy themselves and to not be afraid to mingle. They immediately talk to Tara and Paul, but the hostess Genevieve returns to take their phones. Eric and Nell are told by Dave that they further they are from their phones, the more staticky the ear bud becomes.

Sam tells Anna she needs to understand the way Callen copes with the demands of the job when she asks him if Callen is okay. Sam confesses that he talks to his wife, Michelle about everything because there is nothing better than talking to someone who gets it. Sam sends Dave photos of the computers as Anna finds pictures of Tara and Paul with Logan on a double date.

At the retreat, Genevieve tells the couples to look into each others eyes, telling them the moment they knew they were in love with the other. She tells Eric to go first; Kensi says they should not be listening, but Deeks wants to hear it all because they should have been the ones at the retreat, the couples continue going one by one.

Callen watches an SUV pull into the drive way, a man, a young boy and Joelle Taylor (Elizabeth Bogush) stand in the drive way; Callen is in shock. As Joelle is on the phone, Callen approaches her in the driveway. The man comes back out to make sure Bev is okay, she says Callen is just someone she works with. As Callen leaves he tells her he will see her at work on Monday.

Nell talks to Tara about being upset earlier and shares a story about her sister loving animals too; she tries to get her to open up but Tara leaves to the bathroom instead. Eric catches Paul using a cellphone and he abruptly end their conversation to go to the bathroom too.

Kensi and Deeks are conflicted about being in the woods. She loves it, but he says they are terrifying. She then tells him she needs a fire and if he builds one she will roast some marshmallows and then maybe they can have a couple’s retreat of their own.

The couples are sent out on a scavenger hunt, and Tara and Paul bolt off before everyone else, as Eric and Nell attempt to keep up. Back at Ops, Dave finds who was with Logan that night; his name is Trevor Young, who is a freelance broker and suspected hit man. Dave sends Sam and Anna Trevor’s address. Kensi says Nell and Eric have an uphill trail to follow. Deeks and Kensi laugh about the movie The Predator.

Sam and Anna find the door is open at the address. Sam chases him but shoots him dead; he sends pictures to Dave but Anna finds Trevor dead in the kitchen; Sam believes the buyer is trying to eliminate the middle man. They don’t find any thumb drive and Anna feels the Nelsons are at the retreat to make the exchange there.

Dave contacts Anna and Sam informing them the bracelet is used to make them look like a religious brotherhood, but they appear to be a group who is funding terrorist activities in the US; the smoking gun is recently they were denied tax exempt status on their organization. Dave also discovers Trevor met with Paul and Tara the day they left LA.

Hetty orders Nell and Eric to bring in the Nelsons right away; but they inform her that the couple is gone. She wants them found now.

Callen meets with Joelle at the boat shed, who admits that the man she was with is her husband and Callen could have really ruined it for her showing up like that. He is very angry when he finds out she had a 3 year old son at home while they were together.

He asks her to tell him where Sabatino is, she doesn’t know but gives him a number to call if he needs her, and to never show up at her home again. Anna finds an address on Trevor’s car’s GPS and they believe that is where the organization is meeting.

Nell pulls a gun on Tara, revealing they are federal agents. Tara says they never sold anything, and a beaten and bloody Paul comes out of the shed. Tara tells them they kidnapped her sister Chelsea and are forcing them to do this.

Paul and Tara describe the man who had the thumb drive and which direction he went. Nell and Eric begin to look for help; Kensi and Deeks are on their way, hoping to cut them off.

Sam and Anna arrive at the address from the GPS and they are able to get a visual on Tara’s sister tied up to a chair, while Dave gives them a way to get in. Deeks and Kensi are chasing the truck as Anna attacks one of the men inside the building. Sam beats the other guy who was standing by Chelsea.

Deeks and Kensi lose the vehicle, but Nell and Eric catch up to it after Nell empties her gun, Eric shoots the gas tank, and the vehicle flips and catches fire. Nell and Eric kiss and of course, Deeks takes pictures of it.

Awkwardly, at the boat shed Nell and Eric say the woods brought out a lot of truths. They are about to kiss when Dave walks in, he is in the same position as them; his girlfriend works with him in the NCIS: Cyber office.

Callen returns to the office, where he runs into Hetty. He understands she wanted him to see the whole picture with Joelle. She says facing one’s pain head on and cauterizing the wounds is true bravery. She admits she hated Joelle as much as he did for hurting him. She says Callen should be proud of his team; he says he is.