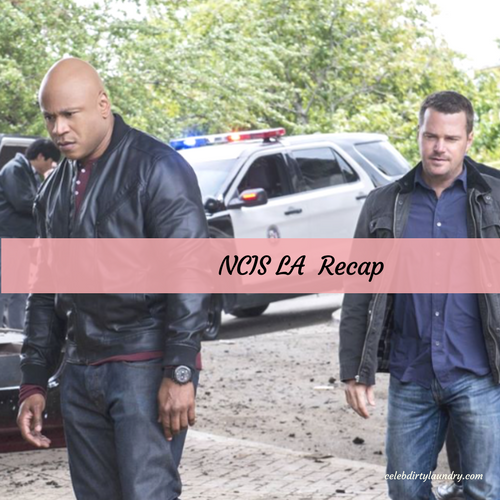 Tonight on CBS NCIS: Los Angeles returns with an all new Sunday, April 30, 2017, season 8 episode 22 called, “Golden Days” and we have your weekly NCIS: Los Angeles recap below. On tonight’s NCIS Los Angeles episode, as per the CBS synopsis, “A gold heist investigation partners the NCIS team with Hetty’s former colleagues from the Vietnam War. ”

Everyone was concerned about the missing forty million. But Deeks had had something else on his mind. He had apparently confessed in a moment of weakness that he had killed his former partner because they were dirty. So he now feared that secret coming out because the person he had told this secret to had somehow survived a risky surgery that no one thought she would. And so Deeks has thing over his head that he feared would destroy the life he had built recently however Kensi was doing her best to calm him down. Kensi had heard that the detective in the hospital had asked to see Deeks and she chose to be optimistic about it.

Kensi had tried to tell Deeks that maybe everything would turn out for the best. However. She also mentioned that if the worst were to happen that she wouldn’t have a problem with going on the run with him. Kensi said that they could skip town and just live on the road yet that idea had been somewhat appealing to Deeks because he was genuinely scared about the murder charge hanging over his head. So Deeks was distracted. He had wanted to know if his secret would get out and if he would be facing jail time. And so he didn’t focus on the current investigation into the missing forty million that just happened to be in gold bars,

Yet, Deeks’s team had later gotten some information about that. They had found out that the man behind the heist to begin with had had several members involved with a gang shoot-out under one of LA’’s underpass. So they wanted to find out what their guy was doing because he could be on the verge of starting a gang war or even a real war if he wanted to with all that money, but the gang had also had another concern. They knew that if they wanted to investigate what Yaniv was up to that they had to keep an eye on Hetty;s old Vietnam friends because the older agents had a tendency to get in the way.

The older guys seemed to believe that they always knew what to do and that they were also always right. Though things were different since their days in the field and so NCIS hadn’t wanted them getting in the way of the investigation. So Sam, Kensi, and Callen each took one of the older guys with them in order to keep watch and funnily enough that decision later drove them crazy. Langston liked to spit out the shells of the nuts he likes to eat and he did that in the car that he shared with Callen, but Callen’s friends were surprisingly in a worst-off position. Kensi was dragged across town by Chegwidden who refused to tell her what he was doing and Sam had Bridges.

Bridges often complained that he was hungry while they were on stakeout and that he could develop cancer if he didn’t get any food. But Bridges didn’t have any money and was a difficult eater on top of that. So he bugged Sam into handing him money however, Bridges had apparently forgotten all about his complaints as well as being hungry when their stakeout led them to finding someone in the gang that they were looking for. And so both Bridges and Langston sort of got in the way of apprehending a suspect and they didn’t appeared to care that things were done a little differently now.

Like they didn’t hit their suspects with their cars and they didn’t threaten said suspect with hammers because the guys technically had rights that stopped from legally doing that. However, the older guys refused to take a hit. They believed their way was the right way and they didn’t think differently even as current technology helped them out. Eric and Nell had looked into the suspect’s phone and he had found frequent contacts that the guy had been talking to lately. So he hacked the suspect’s friends’ phones and had gotten an image of Asher. Asher was being held in a unmarked building yet Eric and Nell also knew how to trace those phones.

They had gotten a location for the guys and both Sam and Callen had gone out there with the men they were babysitting. Yet, unfortunately, they had been too late to save Asher. Asher had been dead for a while and everyone directly involved in what happened to him had also been “taken care of” before Sam and Callen had even arrived on the scene. So the guys knew that Asher gave up whatever information he had before his death though that made them concerned about Yaniv because if Yaniv had what he wanted then he wouldn’t be sticking around LA for long. And so they tried to track Yaniv’s movements.

Though Yaniv had had a secret. He had been moving the gold through a hedge fund that was run by Mallory Fletcher. Now Fletcher had previously argued that she didn’t know anything about the guys that were doing business with her, but her name kept popping up in the investigation and so it wasn’t surprising when her name cropped up again when Eric and Nell finally pinned down Yaniv’s location. So the team had gone out there and they had told the older agents to stay behind. But they had ran into some gunfire and having the old guys unexpectedly arrive on the scene had helped them to arrest everyone.

That include Yaniv and his Fletcher who could have helped move his money undetected. But Langston, Bridges, and Chegwidden did get in trouble for saving the day because they happened to interfere with an ongoing investigation. So the old guys got a reprimand however they didn’t care because it had felt good to be back in the field and the whole experience had helped them remember Granger. Granger had been the wild one who had made them laugh and they couldn’t help but miss him when everything was said and done. And so they honored him later with just Hetty for company.

And that had been good for them. However, Deeks had talked to the detective and she had remembered his confession about killing Boyle. So Deeks was more or less forced into helping her as she looked into other dirty cops on the job.