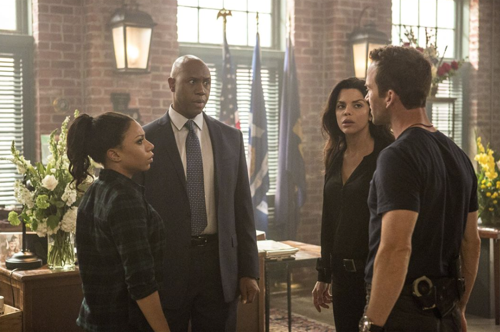 Tonight on CBS NCIS: New Orleans returns with an all-new Tuesday, May 16, 2017, season 3 episode 24 called, “Poetic Justice,” and we have your NCIS: New Orleans recap below. On tonight’s NCIS: New Orleans Finale episode as per the CBS synopsis, “In the Season 3 finale, unable to trust anyone in New Orleans, the team calls in FBI Assistant Director Isler to help expose and stop the sinister scheme that Mayor Hamilton has planned for the residents of Clearwater.”

The only ones that knew for sure that Pride was alive were his friends. They had gotten the DNA results back and the body that had been found in the fire was someone else however it hadn’t taken Pride’s people too long to realize that Pride hadn’t wanted to be found. But the team hadn’t liked what Pride was doing. They knew that if he was faking his death that it meant he wanted to go after the Mayor without anyone getting in the way and the one thing they were all in agreement on was that Pride couldn’t go it alone. So Gregorio decided to call in her old boss.

However, some of the others didn’t think they needed anyone else and so she had explained the situation as carefully as she could. Gregorio said that they needed as much help as they could get and that it was more imperative than ever to find Pride after Stone’s body washed up in the harbor. So allowing the Deputy Director of the FBI to run point didn’t sound like such a bad idea. They all knew that he was incorruptible and that he would see that the Mayor was brought to justice so eventually the rest of the team agreed with Gregorio.

They had talked about it and they had realized that Isler was their best bet. Though Isler hadn’t initially wanted to reinstate them all. He said that their own Director had suspended them and that investigating Pride’s whereabouts would be easier without them. So Gregorio had had to talk to Isler as well. She told them that no one knew Pride like the team he personally trained and that they also knew everyone involved. Like the Mayor who could potentially lead them to Pride seeing as Pride was looking for the Mayor.

So Isler had agreed to work with them and he last pulled enough strings to get them their badges back though their first stop at the Mayor’s office hadn’t gone as planned. The Mayor had apparently found a new head of security after Stone had gone on the run and so members of the NOPD were personally acting as his bodyguards. But those same guards hadn’t wanted to allow Gregorio anywhere near the Mayor because she had gotten tainted with the same brush as Pride and so Gregorio had been forced to push her way into the Mayor’s office and the Mayor hadn’t been there.

He had seemingly gotten a call from “Stone” and so he hadn’t told anyone because he hadn’t wanted anyone to know that he was still in contact with a known criminal. Though leaving like he did had allowed him to fall into Pride’s trap and get taken prisoner. So Pride got what he wanted. He had gotten his hands on the Mayor and he had been willing to just get revenge yet someone had called Stone’s phone asking for confirmation and that told Pride that something was still in play. And so Pride had been in the middle of getting answers from the Mayor when NOPD found their location.

It turns out that the Mayor’s new security detail had planted a tracking device on the Mayor in the seams of his coat in order to find him if he was ever taken. Yet, Pride had wizen up when he heard the sirens and so he had gotten rid of the device before he took the Mayor out the back. Then came the question of what to do? Pride knew about the second team in Clearwater and he didn’t have the resources to investigate the matter on his own. So he called Wade and had her deliver a message to the team about what he found, but he also told her he wasn’t going to turn himself in just yet.

Pride had wanted to know what the second team were planning and therefore he took the Mayor into Clearwater. That way if anything happened then it was going happened to both of them as well. But despite the threat, the Mayor still hadn’t wanted to give Pride anything and so it had been up to his team to stop what was happening. And they hadn’t been sure if they should even take Pride’s word anymore. He had killed Stone and he was probably going to kill the Mayor, too. So they had gone back and forth over whether or not Pride had lost his mind.

Yet, Sebastian proved to be the deciding factor. He had found trace evidence of an explosive on Stone’s clothing and Percy had known that the chemical was enough to level Clearwater. So the team called on their old friend in the Coast Guard to sweep the area and she had used their sonar system to detect any activity however they had found someone use a massive hack. Some of Stone’s men had used a hack to release the flood gates and their plan had been to wash the people out of Clearwater all along. And so the team had found out what the plan was right around the time the Mayor finally cracked after he heard the flood warning.

So Pride had known what he had to do. He had been part of the river boat team after Hurricane Katrina and therefore he knew which levee the Mayor needed to take down if he wanted to flood Clearwater. However, he had gotten caught before he could make it to the levee and so Isler had had to cover for him. Isler had told NOPD that Pride was working undercover for him and that they needed to stand down before they all found themselves out of a job. And so Pride had been able to get to the levee and he had run into danger, but his team had been there for him. They had provided backup and together they had all stopped the explosion.

Only Pride had quickly left the scene afterwards and no one had been sure about what he was going to do next however he had made the decision in the end. He had given up on the opportunity to kill Hamilton because he eventually remembered what he was on. But Isler had taken credit for saving Clearwater and therefore the only thing that NCIS got were their badges back. And that included Pride. So when Pride thought he was alone, he ended up finding out that there were more that cared about him than he knew and they had even helped him to clean up his bar when all was said and done.