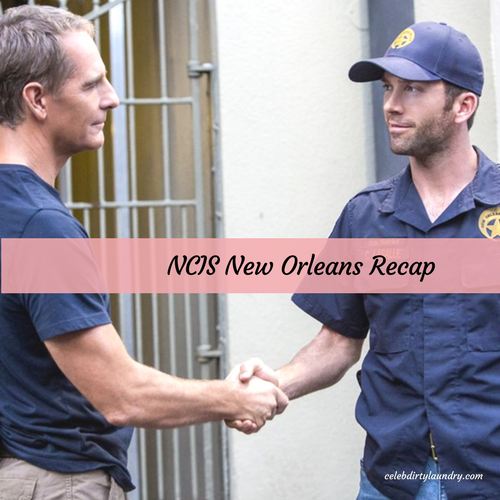 Tonight on CBS NCIS: New Orleans returns with an all-new Tuesday, April 18, 2017, season 3 episode 21 called, “Krewe,” and we have your NCIS: New Orleans recap below. On tonight’s NCIS: New Orleans episode as per the CBS synopsis, “Pride listens in on a wiretap of Mayor Hamilton, while the team investigate a train heist of hundreds of Navy weapons.”

Pride was making a move on Mayor Hamilton. He had gotten a judge to sign off on a wiretap and he trusted Patton to monitor all of Hamilton phone calls however the warrant for that same wiretap had some rather unfortunate conditions. Like how Patton couldn’t record the mayor unless he was talking about his offshore accounts or Clearwater. So the AUSA had said that if Patton didn’t know the entirety of the case against the mayor then Pride was going to have to babysit Patton so that they don’t miss an opportunity or record something that had no value. But watching over Patton meant Pride couldn’t oversee NCIS’s latest investigation personally and that was a problem.

Well, technically it was a problem just for him. Pride was a bit of a control freak and he liked to oversee investigations himself and that went especially for a new one yet LaSalle and the others had sworn that they could handle things on their own and for the most part they could because thankfully they weren’t investigating another murder. They were actually investigating a robbery after hundreds of military weapons were stolen during a train robbery. So NCIS were looking into who could possibly steal those weapons when they found out something from the people that were supposedly its victims.

The victims were the Bancrofts. They were the manufacturers and it had been their company had gotten robbed of millions in goods though strangely the Bancrofts had been robbed twice before. They said that there had been two other heist in which several weapons were stolen and that both had been investigated by leading federal departments. Yet, no one had found anything and so the Bancrofts said that they didn’t think anything would change seeing as the robbers hadn’t been caught up to that. So NCIS had wanted to be different. They had looked into the heist and they had found a matching fingerprint.

The fingerprint belonged to a former Marine Josephine Bellacroix and she was also a New Orleans native. Though when NCIS went to go speak to her, they had found Josephine murdered. She had been killed with one of the guns that was recently stolen and that meant it didn’t matter that the rest of her heist had used rubber bullets to steal the guns because now they had been implicated in the murder of one of their own. So NCIS had needed to get to the bottom of the heist without anyone else getting hurt and their last link had seemingly died with Josephine, but LaSalle had said that they could keep looking without bothering Pride.

So their next step had been to look into Josephine’s friends and family because she must have turned to someone when she got shot and so they found out about Dr. Miller. Miller worked with Doctors Without Borders and was on the board of trustees for Bancroft Enterprises. But the team knew that Miller would most likely be at the garden party that the Bancrofts were hosting and so they had needed Pride to deal with the Bancrofts while they looked for Miller. And sadly it later turned out that whoever got to Josephine had also gotten to her because she had been killed just as ruthlessly.

Both women had been shot to the point of overkill and that indicated that their deaths were supposed to serve as a message. However, Pride and the team had both wanted to know why. It had been strange that both victims had come from privileged backgrounds and suddenly decided to steal guns. So Pride figured if they found out they the guns were stolen that it might them catch their killers yet first they had gotten a tip. Patton had apparently overheard Justus Bancroft telling Mayor Hamilton to get the police to back off and that in exchange the Mayor could be the one that “miraculously” found the guns for the family.

Yet, the fact that Justus knew where the guns were had incriminated him for the theft as well for insurance fraud. So Pride made a choice. He chose to risk the warrant that he had against the Mayor to get Justus Bancroft though it all blew up his face because Justus refused to talk despite hearing himself on the recording and the AUSA had told Pride that he overplayed his hand. He had gone beyond the scope of the warrant and he had risked angering a powerful man because odds were that Hamilton was going to find out about the warrant against him as well as everyone that had gotten it to pass through. And so Pride realized he made a mistake

He had lost the mayor and had risked his chance of ever receiving another warrant. Though luckily Sebastian had found out that there was a reason Justus wouldn’t say where the guns were. Sebastian had apparently found a connection between Justus’s daughter Nadine and the two other women involved and so she was the link. Nadine told them when the guns were being moved and that helped them organize a successful raid. So Pride and his team rushed to the Bancrofts because he knew that whoever killed the others would go after Nadine and it turned out to be a good thing that Pride rushed to the rescue.

He and his team had seen Nadine being forced into the car and they were able to stop her kidnapping. But one it was all over and they had actually gotten a look at her would be kidnappers, they had asked her why Boko Haram’s men were coming after her and her friends. So that’s when she told the story. She told them that they had all been overseas when Haram’s men started to ransack the villages, rape women, and kill children however there was nothing they could do because their embassy didn’t want to help and had left the villagers to their deaths. And so that’s when the ladies came up with their idea.

They were going to steal the weapons and hand it over to the villagers so that they could finally protect themselves. However, Nadine didn’t regret what she did and she refused to hand over the weapons even as her own life was in dangerous because of the work she did. So Pride had let Nadine go and then he had had her followed yet Percy had thought that was wrong. She said that they should help Nadine and that the villagers didn’t deserve to get cut down for no apparent reason. And so when Nadine walked right into an ambush, the others did their best to keep the guns out of Boko Haram’s hands while Percy decided to let Nadine go.

Yet, Percy later had to explain herself and she hadn’t regretted what she did nor she did want to give up Nadine once she had gotten caught in the lie about Nadine getting away to the judge. So Percy went to jail because she didn’t think Nadine deserved to!