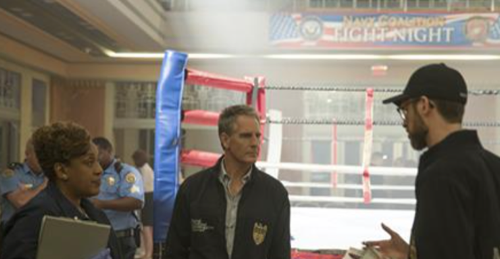 Tonight on CBS NCIS: New Orleans returns with an all-new Tuesday, May 2, 2017, season 3 episode 22 called, “Knockout,” and we have your NCIS: New Orleans recap below. On tonight’s NCIS: New Orleans episode as per the CBS synopsis, “Pride finds a connection between Mayor Hamilton and the illegal activity taking place in the city of Clearwater after the Belle Chase Navy Chaplain and pastor at Clearwater Baptist is murdered.”

Percy was still in jail. She had broken the law and lied on a federal form because she believed in someone who was doing the wrong thing for all the right reasons. However, Pride was trying to get her out. He had called on every favor and had tried to speak in Percy’s defense yet it proving to difficult to get Percy out of prison because Mayor Hamilton was working against them. The Mayor was apparently still bitter about the warrant Pride had gotten against him and so he was also calling in favors just keep Percy locked away. So both the Mayor and Pride were beginning to fight dirty when Pride got a new case that he thought could lead to the Mayor.

The Mayor had used a shell company to buy property in Clearwater and there had been evidence that someone was trying to push the relatively poor families out of the neighborhood in order to turn a profit. Yet, Pride hadn’t been able to connect the Mayor to what was happing in Clearwater and so he thought he had a second chance with a Navy Chaplin’s death. Chaplin Morgan had unfortunately been stabbed right outside of a charity boxing match and the Mayor was attending that same match though what connected the Mayor to the Chaplin had been what the Chaplin was doing before he died.

The Chaplin apparently lived in Clearwater and tried to look after the people there. Though he mentioned in recent weeks that there was a new player in Clearwater that wanted to take down the neighborhood. So Pride had wanted to believe this new player was the Mayor, but his team on the other hand didn’t want to jump to conclusions. They preferred investigating the Chaplin’s death on its own terms rather than look for ways it could be connected to the Mayor and so they were constantly trying to tell Pride to slow down. And he just couldn’t. He believed the two cases were connected and put a lot of pressure on his team to prove it.

But one of the kids that the Chaplin used to mentor had reported an incident with a gang member. He said that the guy was seen arguing with the Chaplin the day before he died and so he believed the gang member to be the Chaplin’s murderer however the evidence just didn’t add up. The gang member said that he had questioned the Chaplin after one of his guys went missing and that he thought it had been a rival gang that did it. So he had gotten into argument with the Chaplin because Morgan kept saying it wasn’t the other guys and that there was a new player in the neighborhood. And so Pride felt vindicated when he heard that.

He believed it confirmed his theory of someone else suddenly coming into Clearwater and doing their best to get the gangs to tear themselves apart. However, his team were still skeptical by that point because again a “new player” didn’t automatically mean it was Mayor Hamilton. So the team did what they did best. They traced the Chaplin’s last whereabouts seeing as they knew for a fact that he was looking into this new player and they found out he went to a warehouse that just so happened to be connected to the Mayor’s shell company. And so that’s what finally made the others come around to Pride’s theory.

Yet, there was a problem. Mayor Hamilton found out that NCIS were getting close and he pulled some strings to get Percy admitted into general population. Now a federal agent in general population was basically a death sentence though Percy managed to find a way out of it. She had attacked one of the guards and that automatically got her sent to isolation where she could be safe for a few days. So Pride had heard what happened and that made him even more desperate to close the case. He knew then that the Mayor was coming after them anyway he can and so he followed the lead they on warehouse. And it did lead them to a suspect.

The suspect was some hired guy that was moving a couple of boxes. Though he chose to shoot at NCIS when he saw them appear and he almost killed Pride in a one on one combat. So Pride and the team knew that they found the right place, but their suspect got away and so Pride decided to be creative. He had Wade take a blood sample off his fists to see if it matches the guy he had run into and it turns out that he did meet the killer. And so Pride had Patton run an analysis on the DNA to see where it cropped up and it came back with information about the killer being a former Israeli soldier.

The soldier was former Mosad and had been special forces before he joined the private sector. But just as Patton was closing in on him, the ADA stepped in and shut him down. She said that she received a tip that Patton had hacked a federal server during a gaming incident however there was nothing that Pride could do to get Patton off the charges. He knew that Patton had only hacked in those systems for a sting operation and he also knew that whoever had known about the Javier Garcia’s case must have been the DA’s informant because all the files they had on that case had been put away after Javier died. And so that was very telling of the Mayor.

The Mayor didn’t bother hiding his hand when he went after Patton and that meant he was getting desperate because he no longer was even hiding what he did yet it was Sebastian that figured out why the Mayor was acting so recklessly. He found out that the Chaplin had taken video at the warehouse and that he gotten some type of transaction on tape. However, the Chaplin died before he could reveal to Petty Officer Jonathan Rudd where he put his memory card. So that’s why Rudd was also targeted in broad daylight! And so the guys thought of where the Chaplin could have it and their best bet was the church.

The Chaplin’s last words had been the same scripture he always used in church and it had been safe place. Yet, right as Pride collected the memory card, they were targeted and would have died if NOPD hadn’t showed up. So Pride afterwards watched the video to find out what was so important that the Chaplin had to do for it and it turns out that Chaplin had gotten footage of the Mayor’s new body guard plotting with the killer over what to do about Clearwater. And so Pride could have arrested the “bodyguard” though he chose instead to sit on the information because he wanted Stone to lead him to the Mayor.