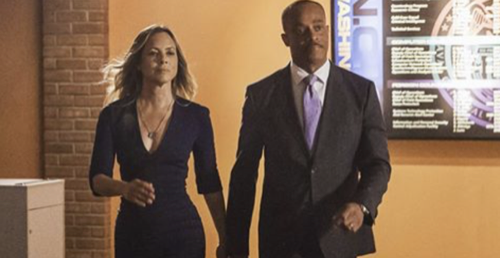 Tonight on CBS NCIS returns with an all-new Tuesday, October 17, 2017, season 15 episode 4 called, “Exit Strategy” and we have your weekly NCIS recap below. On tonight’s NCIS season 15 episode 4, as per the CBS synopsis, “NCIS Special Agent Jacqueline Sloane, a forensic psychologist, joins the team just as a horrific storm shuts down Washington, D.C. During the power outage, a sailor is kidnapped, and Torres and Bishop go out to sea to track evidence.”

A stranger came knocking on Gibbs’s door. She had gotten caught up in the nasty weather outside and had needed someone’s phone to call for help. But Gibbs hadn’t hesitated in helping Jaqueline Sloane. She was attractive and she sort of got Gibbs’s vibe. So the two had talked for a while and they were enjoying each other’s company when work called. There had been an incident at a masquerade party involving a Marine and so Gibbs had had to report to duty however he allowed Jaqueline to stay after he had gone.

Gibbs had decided to trust this person out of the blue because he didn’t think Jaqueline was the type to steal from him and therefore Gibbs had lower some of his guards. He was usually concerned about his privacy and hadn’t shown any of his normal misgivings when he allowed Jaqueline to stay. However, Gibbs had put whatever he was feeling aside to focus on the case. That “incident” at the party had actually been attempted murder. Someone had stabbed Marine First Lt. Ethan Wynn at a Halloween party and he had something to say when he finally came to.

Wynn said that someone in a devil costume had stabbed him. Yet, that person had also taken his wife Helen. Helen was in the military as well and her mother had been notified about her disappearance, but Helen’s mother thought Helen had taken because they were wealthy. The family was rich from a soap empire and so the mother thought someone would call demanding a ransom while NCIS didn’t think that was going to be the case. They had looked into the party and someone with a devil costume had been following the couple.

The devil had been carrying a river knife and that had been the same kind of weapon used on Wynn. But at no time had there been a ransom call. She had just been taken and then nothing. No word on what happened to her or why someone had taken her. So NCIS investigated all possible angles. They looked into Helen’s crew and had found nothing odd there though Helen had been calling the crew’s financial liaison a lot leading up to their deployment and he said that Helen had needed to double check everything.

Though that still didn’t tell NCIS why she had been taken and eventually the team had gotten word that her car had been found by the lake. So McGee and Gibbs went to go check it and unfortunately they had found Helen in the trunk. She had been tied up and beaten however the two agents at the scene had had to take over the case once it became a homicide. McGee and Gibbs had still been left on land while their partners Torres and Bishop hadn’t been able to leave Helen’s ship. The ship was already operating on a skeleton crew because of the bad weather and so things became even dire when that case the bad weather turned into a Category 3 hurricane.

Hurricane Molly had gotten so bad that the Director had cleared the building of most of NCIS personnel and so they too were operating with a skeleton crew. However, Director Vance had brought in a forensic psychologist that could stick around to help the team. Her name was Special Agent Jack Sloane and she had apparently pulled a certain stunt with Gibbs in order to find out what kind of man he was. So Gibbs didn’t care for how she went about things and the two found themselves constantly butting heads.

Sloane had looked at their case and Gibbs often found her in the way. But Sloane managed to see things that others didn’t. She saw for instance that Helen’s captor had wrapped Helen’s hands in cloth before tying them up in the rope. So someone had tried to make her abduction as comfortable as possible and so Sloane suspected they hadn’t meant to kill her. The person in the devil costume had stabbed Helen’s husband and had bashed her over the head with a rock. And so Sloane suspected that Helen’s death could be a last resort because she either recognized her captor or had managed to upset that person.

Sloane said that the devil was most likely someone in love with Helen and so Gibbs decided to take a closer look at the husband. Wynn had checked himself out of the hospital early on the night Helen was murdered and he had also forgotten to mention his wife had filed for divorce. Yet, Wynn said that they had been working through that and that he left the hospital early to go look for Helen. So things weren’t looking good for Wynn though Torres and Bishop had found their own suspect. They had suspected Helen’s XO of having an affair with Helen.

Helen had been intending to divorce her husband and so it would make sense if she found comfort in someone else. Though Commander Thomas Buckner said it hadn’t been him. He had been there for Helen because he had gone through a divorce after ten years of marriage and so he had counseled Helen not to make the same mistake he did. So Torres had been willing to hear Bucker out, but Bishop hadn’t wanted to do the same. She had known Bucker from high school and he used to bully her so badly that she had to get her brothers involved.

Bishop told Torres that her brothers had broken two of his fingers and that he finally stopped teasing her after that. But Buckner knew he was a jerk in high school and he had apologized to Bishop for his behavior however he didn’t kill Helen. He said she had been a friend and he had truly been broken up when they told him that she died. So Bishop had to lay off of him for a while and in the meantime, Abby found out who really was behind Helen’s death. Helen’s car keys had been left in her car and there hadn’t been any other keys on them.

Meaning someone had had to take off their gloves to remove the other keys and so Abby ran the fingerprints. However, the fingerprint matched someone on board the ship. His name Petty Officer Joe Smiddy and both Bishop and Torres found him stealing the money from the ship’s safe. So that’s why he had become involved in what happened to Helen yet he hadn’t killed her and hadn’t expected she would be murdered. He said he and his friend had planned on stealing Helen’s keys to the safe and then getting out of town with the profits only they never agreed on killing her. And so Joe gave up his partner.

His partner was Mitch Grayson and he was the financial liaison that claimed he was only talking to Helen because of deployment when instead the two had been having an affair, but Helen had ended things to go back to her husband and so that’s when Mitch decided to kill her.