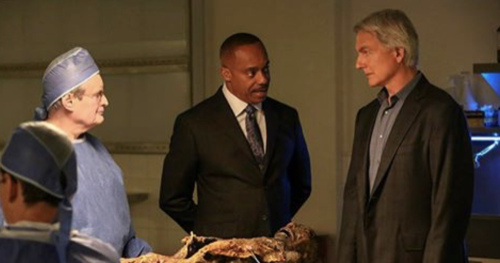 Tonight on CBS NCIS returns with an all-new Tuesday, November 14, 2017, season 15 episode 8 called, “Voices” and we have your weekly NCIS recap below. On tonight’s NCIS season 15 episode 8, as per the CBS synopsis, “An NCIS person of interest in a bribery and fraud case is found murdered after a runner is led to his body by a strange voice. Also, McGee and Delilah disagree on whether to find out the baby’s sex or keep it a surprise.”

A female jogger was out on her morning run when she heard a voice. The voice sounded as if someone was in distress and so the jogger went to go see if someone had been hurt out in the woods. But the voice had been calling out “help me” couldn’t have come from a living person because it led Amber to a body that had been dumped out there. So Amber tried telling people what happened and they just refused to believe her. They couldn’t make a connection between a dead body and a mysterious voice and Gibbs for one hadn’t wanted to try.

NCIS had been handed this case after it was revealed the victim was Victor King. King had been a businessman and he had been a supplier for the Navy, however, he had been up to some shady dealings on the side and had been under investigation when he disappeared several years ago. But while NCIS had Amber to thank for finding the body, Gibbs didn’t put a lot into believing a voice led her to King. So he asked his people to investigate Amber and had her checked out by Jack to see if she needed a psych eval.

But Jack had talked to Amber for a while and she had noticed a few things. Like how the fights began to flicker out when Amber started to hear the voice again and that Amber knew things that she shouldn’t know. She had claimed after all that she had never met Victor King and so she shouldn’t have known that he got into a fight with someone right before he died or that the person he supposedly feels had in fact been a real person. So Jack took Amber back to the squad room and the team allowed Amber to assist them.

They knew Amber couldn’t have been the killer because she had been overseas at the time of death and hadn’t been connected to the victim in any way whatsoever. But Amber “knew” things and the man she had identified as fighting with King had been Thomas Westbay. Westbay had died two days before King had gone missing and his death had been written off as a car accident. So Amber had been surprised by that because she sensed the accident hadn’t been an accident and so that led the team into investigating it.

They went back to the car and checked it out. But Abby found things didn’t line up with Westbay dying in an accident because she said that Westbay had left an imprint of his shoe on the brakes and that it meant he had tried to stop the car. So what Abby couldn’t understand was why didn’t it work? She had checked out the brakes and they had appeared in working order though there hadn’t been any skid marks out on the street that day that showed he tried to stop. And so Abby kept investigating this conundrum when she inadvertently found something.

Abby had found that someone had hacked the car. The brakes were meant to fail on Westbay and then snap back together by the time the police showed up, but that wasn’t all of it. Abby had also looked into the very expensive GPS watch that had been King when he died and that too had been hacked. So someone had gone out of their way to kill both men and the one thing they had common had been them both being dirty. The steel magnate had paid people to look the other way and the inspector was probably one of those people because he had been proved to be dirty.

Westbay had taken his new car to the mechanic every three weeks and the mechanic had verified their theories about Westbay. But Abby had found one other thing that had been troubling. She had found a fingerprint on King’s watch and it had come back as belonging to Amber. But proving Amber to be the men’s killer had been tricky. Everyone had thought she was a wonderful actress that had been playing a game with them and the tricky part had been Amber herself because Amber appeared to be honestly confused when confronted.

Amber said she would never kill someone and that she didn’t even know the men personally. But the team had used facial recognition that proved Amber had snuck back into the country on a fake passport and so she had been in the country to kill both men. So they thought Amber would finally confess and the truth was that she didn’t remember those things. She didn’t remember sneaking back into the country and had therefore asked for help from Gibbs because she was starting to question her own sanity by that point.

Amber didn’t recall anything they pointed out and the team couldn’t find a motive. But they found her ex-husband and he told her about their daughter. Their daughter hadn’t died like Amber said. She had fallen through the floor when their building had collapsed in on itself and it turns out that both King and Westbay had been responsible. The crappy steal that one of them made and the other had signed off on as safe had killed Amber’s daughter. So she killed them out of revenge and she didn’t remember until they forced her to deal with her pain.

Amber had believed her daughter died in her sleep peacefully and so finding out what had really happened to her daughter had brought all those memories back. But once she knew, she remembered that there was a third person responsible for what happened to her daughter. So she snuck away from the orderlies that were taking her to the mental hospital and she found the man that King had bribed to keep him out of prison. The guy had worked with NCIS and the investigators looking into King yet he would tell King beforehand about all the possible leads.

But not long after Amber got away from her escort, NCIS was alerted and so they followed her to a house where she was holding someone at gunpoint. So the guys had rushed in believing Amber to threat and she wasn’t. At not anymore! She had simply gotten the last guy on video confessing to bribes and so now it was over. Amber had just wanted justice for her daughter and she has gotten it in the end by putting the last man away in prison. So Amber knew she was going to be facing charges for everything she did, however, the team believed her mental disorder and the fact she had been in a fugue state when she killed her two victim had meant Amber had a good chance in court.

So the case had been closed with satisfying and Gibbs denied to everyone that he hadn’t wanted Amber to be a psychic, but deep down, he had wanted to believe. But it didn’t work out and so they had all to figure out things on their own. Like when McGee found out he was expecting twins with his wife – a boy and a girl – through an ultrasound rather than asking Amber!