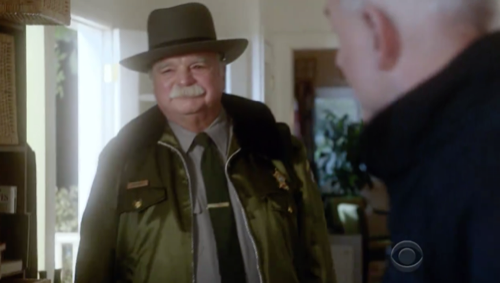 Tonight on CBS the #1 drama series NCIS with an all-new Tuesday, February 7, 2017, season 14 episode 14 and we have your NCIS recap below for you. On tonight’s NCIS season 14 episode 14 “The murder of a petty officer in a small town outside of Washington, D.C., prompts NCIS to once again partner with “The Sherlocks,” a privately funded investigative team that includes their newest member, Anthony DiNozzo Sr.”

NCIS had gotten pulled into a turf war on tonight’s episode when they tried to investigate the death of Petty Officer Maya Kettering and unfortunately found themselves in Sheriff Walter Osorio’s district.

Walter or Walt as he was known by NCIS was apparently a member of “the Sherlocks”. The Sherlocks were a group of individuals that probed into cold cases and did their best to solve them. But the group has had dealings Gibbs and his people in the past and NCIS pretty much found them to be annoying. So Gibbs had been able to get away with ignoring last time however he couldn’t do so now because one of their own actually held jurisdiction. And therefore Gibbs hadn’t really had a choice when Walt said that they had to work together because he thought it was better to keep their enemies close than let them run wild.

However, both parties had truly wanted the same thing. They had both wanted to find Maya Kettering’s killer and so they both relied on the many resources at their fingertips though NCIS did have something of an advantage. They had Ducky and technically Palmer first had to work with them before he reported to do duty with the Sherlocks. So Gibbs had found out that there had been a rash of some sort on the victim’s neck and back and that she had gotten because it of an exposure a certain synthetic fibers though another thing that Gibbs had gotten first dibs with had been the victim’s husband.

Mike Kettering had said that he knew nothing about the rash and his chief concern had more or less been his wife’s death instead of her rash. So Mike had a few questions of his own and one of them had been whether or not his wife was killed during a botched burglary. Though NCIS had wanted to know why Mike would think that and so he told them about the emergency fund. The emergency fund had been five thousand dollars that Mike and his wife had kept hidden in the freezer and so Torres and McGee had gone back to the house to check on the money yet they had found themselves running into the sheriff.

Walt had gone to the house to confiscate the alarm system and see if there had been anyone that had tried to break in earlier as maybe part of a practice run. Yet, the guys had been the upset that Walt hadn’t been cooperating with their team like he said. So Walt, being the crafty guy that he is, had said that NCIS wasn’t cooperating either. He said that he hadn’t found out a single thing from what they learned from the husband and that they hadn’t forthcoming with the autopsy, but both parties did eventually calm down and agree to share information. Which was why NCIS didn’t make much of a fuss when Walt deputized the Sherlocks.

When Walt deputized the Sherlocks, that allowed them to see official reports and even gave them the power to invert view suspects. So the Sherlocks and Gibbs ran into each other again later when they both showed up to question Maya’s XO. Maya it seems had gotten into an argument with her commanding officer and the two women had had a history. But Maya’s XO had said that she had merely been hard on Maya because she thought the other woman had potential and didn’t want her losing that drive however the two had argued because Maya had wanted to stay on the ship and put off her leave.

However, every officer needs their leave and so the XO made Maya takes hers though the Sherlocks and NCIS had wanted to know why Maya hadn’t wanted to go home. They had asked if she had been interested in anyone on the ship and that had been shot down right away. The XO said that Maya mostly spent time with the chaplain because she was religious and it had been her faith that had made Maya more dedicated to her marriage than ever. So everyone knew that Maya hadn’t wanted to go home and just didn’t know why. And so they tried probing into her private life as well as that of her husband’s.

Maya’s husband had allegedly been on a plane when Maya died and so watching him had simply been a way of writing him off completely. Though surveillance did pay off. The team learned that Michael Kettering had been having an affair and funnily Michael had been upset when NCIS revealed to his girlfriend that he was married because she hadn’t known. The girlfriend had just been told that he lived in Dallas and so that’s how he been able to explain that he could only live with her on weekends. So Michael had made Darlene believe he was a completely different person and the poor woman had bought into seeing as there had been no interaction between her and the wife. And so Darlene didn’t honestly have a reason to kill Maya while Michael did.

Michael had later told NCIS that he was sad about what happened to Maya, but he claimed that Darlene was his soul mate and that he would have asked Maya for a divorce. So everyone had looked into Michael because they had been sure he was their guy and the one thing standing in the way of that had been the tapes. The tapes at the airport had showed someone matching Michael’s description getting on a plane when Maya died. Yet, DiNozzo Senior who was a new member of the Sherlocks had been the one to figure out how Michael had killed his wife. DiNozzo had realized that Michael had traded clothes and hats with a guy that could practically be his double and that’s how he had been two places at once.

So Michael did reveal in the end that he had killed his wife because she had tried telling her that he wanted a divorce and the catholic Maya had told him “no”. Maya had thought they could still work on their marriage and so her fear about returning home had been from not wanting to be served divorce papers the second she set foot on land. But Michael had known that his wife would fight him and so he thought killing her would move things faster because he had been on a time crunch. He had found out that Darlene was pregnant and he wanted to start over with her and the baby.